MARIUPOL, Ukraine (AP) — Somewhere inside the grimly defended Mariupol steel plant, where he and his comrades were making their last stand, one Ukrainian soldier was tackling a crossword puzzle.

With reading glasses perched on the end of his nose and deep in concentration, he looked peaceful — in this war-torn city and amid a violent siege that was anything but.

Squeezed against a concrete wall in heavy combat boots and camouflage fatigues, he was surely uncomfortable — but too engrossed to care. Or to notice the photographer hovering to his right, immortalizing the moment inside this last bastion of Ukrainian resistance, the pulverized Azovstal steel mill.

For nearly three months, Azovstal’s garrison clung on, refusing to be winkled out from the tunnels and bunkers under the ruins of the labyrinthine mill. Because of its tenacious defense, not only were Russian troops who had captured the rest of Mariupol unable to declare victory, they couldn’t even all be peeled away to fight in battles on other Ukrainian fronts.

Both sides were trapped, in an enduring image of the monthslong war.

Photographer-soldier Dmytro Kozatsky was among them, on the Ukrainian side. He is now a prisoner of war. His photos are his legacy.

Kozatsky posted a selection of images on Twitter before joining the stream of troops laying down their arms this week. They marched out of the Azovstal mill in their hundreds, carrying the wounded. They were following orders from the Ukrainian high command to save their lives, because they’d fulfilled their previous mission to hamper Russia’s advance.

Nearly 2,000 Ukrainian soldiers surrendered this week, Russian Defense Minister Sergei Shoigu said. An unknown number of others remain inside, seemingly not yet ready to give up the mill, for which their brothers and sisters gave up their lives.

Once they are also in Russian hands, the fall of Mariupol will be complete. Russia will be in full control of a bombarded city that now hardly stands.

But Kozatsky’s photos tell stories that can’t be razed so easily, immortalizing the defenders in lulls between fighting.

One shows a soldier smoking a cigarette to its nub. Was it to be his last?

In another, with an electric strimmer one fighter calmly trims a comrade’s silver hair. Life, even here, must go on, it seemed to whisper, gaining power from its mundaneness.

One more shows two members of the garrison lost in thought, staring into a wood fire. It’s easy to imagine that they were conjuring up memories of happy familiar faces and calmer times miles away.

“Well, that’s all. Thank you from the shelters of Azovstal — the place of my death and my life,” he wrote.

He posted a link to his photos, for downloading “while I am in captivity.”

“Send them to all journalistic awards and photo contests,” he said. “If I win something, it will be very nice after the release.” 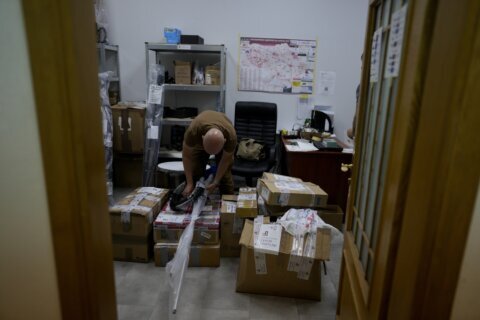