Lithuania’s top diplomat said Monday that removing Russian President Vladimir Putin from power is the only way to protect the West and its allies from future threats from Moscow, urging an even tougher stance than the U.S. and many NATO allies have been willing to pursue since Russia’s invasion of Ukraine.
Listen now to WTOP News WTOP.com | Alexa | Google Home | WTOP App | 103.5 FM

WASHINGTON (AP) — Lithuania’s top diplomat said Monday that removing Russian President Vladimir Putin from power is the only way to protect the West and its allies from future threats from Moscow, urging an even tougher stance than the U.S. and many NATO allies have been willing to pursue since Russia’s invasion of Ukraine.

In an interview with The Associated Press in Washington, Lithuanian Foreign Minister Gabrielius Landsbergis said Putin’s annual Victory Day speech was “underwhelming” and that the “gloomy faces” of generals and others were signs of failing in the Ukraine war. Yet, he said a wounded Putin may be even more dangerous and that the only way to remove the threat is to remove him.

“From our standpoint, up until the point the current regime is not in power, the countries surrounding it will be, to some extent, in danger. Not just Putin but the whole regime because, you know, one might change Putin and might change his inner circle but another Putin might rise into his place,” Landsbergis said.

“And so as long as a regime that intends to wage wars outside Russian territory is in place, the countries surrounding it are in danger,” he said. “And, if one thing was proven to those who doubted it after 2008 in Georgia in 2014 when the first war in Ukraine started, it is that Russia is an aggressive country. That’s very clear.”

Lithuania is one of the three Baltic states that among NATO allies are particularly concerned about possible Russian designs on forcefully returning them to Moscow’s rule. Lithuanian officials, including Landsbergis have been especially outspoken about their fears but his overt calls for regime change go beyond what most NATO allies have been willing to express.

President Joe Biden raised eyebrows among many when he told an audience in Warsaw, Poland in March that “For God’s sake, this man cannot remain in power.” But the White House quickly walked back that statement and Biden himself said he was not calling for regime change in Moscow.

Landsbergis, who was in Washington for meetings with U.S. officials and others, said he had not been impressed by Putin’s Victory Day speech in Red Square.

“‘Underwhelming’ probably is the most used word to describe the situation and I will use that myself,” he said. “I think that we’ve seen a lot of generals and politicians who feel that they’re losing a war to much smaller country that they most probably did not even want to start to begin with.”

“The faces were kind of sad and grim that you usually would not see on the parade day, which is to remember the greatest victory that they think they had, but now it’s not a day of victory for them and many of them they understand that they’re losing,” Landsbergis told The AP.

Many had expected Putin to use the annual commemoration of the Soviet Union’s triumph over Nazi Germany in World War II — a day after the rest of Europe marks Victory in Europe Day — to announce an intensified military push on Ukraine or call for referendums for the annexation of Russian-occupied territory in Ukraine’s east. He did neither.

Landsbergis said Lithuania was pleased with the support that its NATO allies have offered to it and the other countries in the alliance’s eastern flank, but that they needed more. He said Lithuania, along with fellow Baltic nations Estonia and Latvia, would be pressing NATO to supply more air and maritime defenses as well as permanent deployments of troops on their territory when alliance leaders meet in Madrid in late June.

He said the Madrid summit should be a venue where the particular vulnerabilities of the Baltics are taken into account and addressed. “It has to be reflected that NATO has to change its its posture in eastern flank more. In the Baltic states we kind of we feel that we are approaching this point where we are more and more resembling the feeling of West Berlin and during the years of the Cold War,” he said.

He said the Baltics were pleased when Biden said that NATO would defend “every inch” of NATO territory but that those words must be followed by actions.

“We are very happy the way that partners and allies reacted to Russia’s war in Ukraine, sending additional deployments in the Baltic states, but it’s still a short-term solution,” he said. “We believe that we’re approaching the time frame where we have to really take into account the strategic implications of the war.” 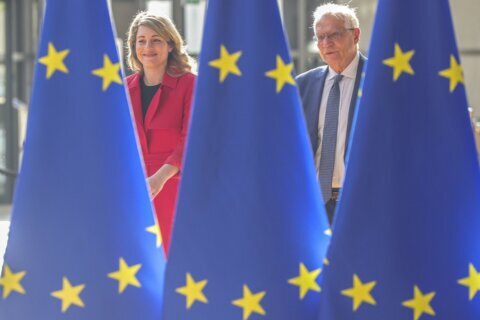