LVIV, Ukraine (AP) — Viktoria Kovalenko bore witness to the death of her husband and elder daughter when their car was hit by a shell in northern Ukraine.

By the time her loved ones got a proper funeral, she was 500 kilometers away, able to watch the burial only on a cellphone video sent to her by relatives.

Even in the relative peace of Lviv, a city little touched by violence in the war with Russia, it was an ordeal she couldn’t endure.

“Tears do not let me watch until the end,” she said as she played the video in a wooded area where she was pushing her one year-old daughter Varvara in a stroller.

In early March, Kovalenko and her family were in their car, fleeing the area of the city of Chernihiv, one of the war’s most intensely besieged.

At a Russian checkpoint near the village Yahidne, a shell exploded.

The windows of the car shattered, she said, and she and 12-year-old daughter Veronika were injured by the broken glass.

The next thing she remembers is the voice of her husband shouting at them to leave the car.

Then she saw Veronika.

“She already was lying near the car, she was headless. I saw everything clearly, how the blood was coming out of the neck,” she said.

It was in those shocking moments that Viktoria’s husband had also lost his life.

Viktoria and her younger daughter Varvara escaped, only to be caught by the Russian troops and taken to the basement of a school in Yahidne.

Locals said more than 300 villagers were forced into the basement. Then, during weeks of stress and deprivation, some began to die.

Kovalenko and Varvara spent weeks in the basement of the school, doing their best to stay alive.

Residents of Yahidne told The Associated Press they were made to remain in the basement day and night except for the rare times when they were allowed outside to cook on open fires or to use the toilet.

As people died one by one in the basement, neighbors were allowed from time to time to place the bodies in a mass grave in a nearby cemetery.

Kovalenko’s husband Petro and Veronika were at first buried in the woods, but later reinterred in the Yahidne cemetery, carried there in coffins along a rough path as friends and relatives wept and some placed flowers and in the grave and scooped in handfuls of dirt.

The re-burials took place after Russian troops left Yahidne in early April when forces pulled back to concentrate their fight in the eastern part of Ukraine.

Kovalenko’s searing memories are enmeshed in the twisted wreckage of their car.

And on a concrete block at a village checkpoint someone has spray-painted a macabre joke: the words “polite people,” the term that Russian authorities dubbed the forces who annexed Crimea from Ukraine in 2014. 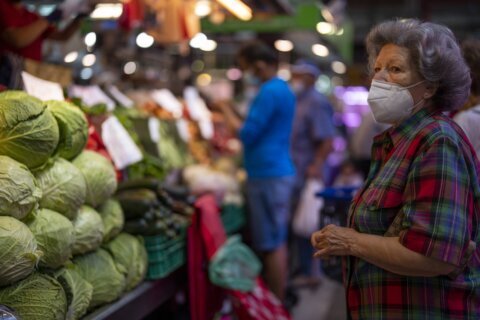