‘This land is in blood’: A Ukraine village digs up the dead

MYKULYCHI, Ukraine (AP) — On a quiet street lined with walnut trees was a cemetery with four bodies that hadn’t yet found a home.

All were victims of Russian soldiers in this village outside Ukraine’s capital, Kyiv. Their temporary caskets were together in a grave. Volunteers dug them up one by one on Sunday — two weeks after the soldiers disappeared.

This spring is a grim season of planting and replanting in towns and villages around Kyiv. Bodies given hurried graves amid the Russian occupation are now being retrieved for investigations into possible war crimes. More than 900 civilian victims have been found so far.

All four bodies here were killed on the same street, on the same day. That’s according to the local man who provided their caskets. He bent and kissed the cemetery’s wrought-iron crosses as he walked to the makeshift grave.

The volunteers tried digging with shovels, then gave up and called an excavator. As they waited, they recounted their work secretly burying bodies during the monthlong Russian occupation, then retrieving them. One young man recalled being discovered by soldiers who pointed guns at him and told him “Don’t look up” as he dug a grave.

The excavator arrived, rumbling past the cemetery’s wooden outhouse. Soon there was the smell of fresh earth, and the murmur, “There they are.”

A woman appeared, crying. Ira Slepchenko was the wife of one man buried here. No one told her he was being dug up now. The wife of another victim arrived. Valya Naumenko peered into the grave, then hugged Ira. “Don’t collapse,” she said. “I need you to be OK.”

The two couples lived next to each other. On the final day before the Russians left the village, soldiers knocked at one home. Valya’s husband, Pavlo Ivanyuk, opened the door. The soldiers took him to the garage and shot him in the head, apparently without any explanation.

Then the soldiers shouted, “Is anyone else here?”

Ira’s husband, Sasha Nedolezhko, heard the gunshot. But he thought the soldiers would search the homes if no one answered. He opened the door and the soldiers shot him too.

The men’s caskets were lifted out with the others, then pried open. The four bodies, wrapped in blankets, were placed in body bags. The lace-edged white lining of each casket was stained red where the head had been.

Ira watched from afar, smoking, but stood by the empty caskets as the others left. “All this land is in blood, and it will take years to recover,” she said.

She had known her husband was here. Nine days after his temporary burial, she came to the cemetery scattered with picnic tables, following the local custom of spending time with the dead. She brought coffee and cookies.

“I want this war to end as soon as possible,” she said.

The other bodies were a teacher and a local man who lived alone. No one came for them on Sunday.

In the house next to the cemetery, 66-year-old Valya Voronets cooked homegrown potatoes in a wood-warmed room, still getting by without water, electricity or gas. A small radio played, but not for long because the news gets too depressing. A plate of freshly cut radishes rested near the window.

A Russian soldier once came running and pointed his gun at her husband after spotting him climbing onto the roof to get a cellphone signal. “Are you going to kill an old man?” 65-year-old Myhailo Scherbakov replied.

Not all the Russians were like that. Voronets said she cried together with another soldier, barely 21. “You’re too young,” she told him. Another soldier told her they didn’t want to fight.

Still, she feared them all. But she offered them milk from her only cow.

“I felt sorry for them in these conditions,” she said. “And if you’re nice to them, maybe they won’t kill you.” 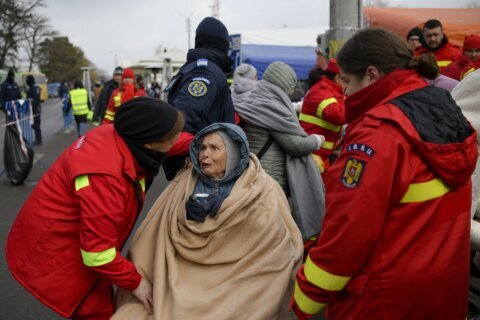