EXPLAINER: A look at West’s escalating sanctions on Russia

The United States and European allies are again escalating sanctions on Russia after the discovery of evidence that Russian troops executed civilians in a town near Kyiv.

New penalties moved even closer to Russian President Vladimir Putin, targeting two of his adult daughters. The U.S., United Kingdom and the European Union prepared other steps including an embargo against Russian coal.

Pressure in the West for new sanctions rose in recent days after videos and photographs emerged of bodies laying in the streets of Bucha after Ukrainian forces regained control from retreating Russians. Some of the victims had their hands bound and were shot in the head, and satellite images indicated they had been in the streets since mid-March, when the Russian military still occupied the town.

“I made clear that Russia would pay a severe and immediate price for its atrocities in Bucha,” President Joe Biden said in a tweet after the White House said he will sign an executive order banning all new investment in Russia.

Sanctions imposed since Russia invaded Ukraine in February have damaged Russia’s economy but failed to stop the war.

Here’s a look at some of the sanctions now in place. Combined, they add up to some of the toughest penalties imposed on any nation short of military action.

The United States on Wednesday announced sanctions targeting Putin’s two adult daughters — cutting off all of his close family members from the U.S. financial system and freezing any assets they might hold in the U.S. The same measures were taken against Russian Prime Minister Mikhail Mishustin, the wife and children of Russian Foreign Minister Sergey Lavrov, former President Dmitry Medvedev and others.

Washington also acted against two of Russia’s largest banks, Sberbank and Alfa Bank, and the U.S. and its allies plan to ban all new investment in Russia. Earlier this week, the U.S. Treasury Department moved to block any Russian government debt payments with U.S. dollars from accounts at American financial institutions — a step designed to make it difficult for Russia to meet financial obligations.

In Brussels, the European Commission proposed a ban on coal imports from Russia. If adopted, it would be the first EU sanctions to target Russia’s critical energy industry.

The United States has already banned Russian oil and natural gas, but Europe has hesitated — it is far more dependent than the U.S. on Russian energy, and sanctions are likely to drive up costs on European consumers and businesses. Germany has long opposed a ban on Russian natural gas. So has Hungary and its president, a Putin ally who is bending to Russian demands to pay for gas imports with rubles.

Europe is also considering banning Russian ships from EU ports — Russian aircraft are already barred from European airspace — and banning the export to Russia of quantum computers, advanced semiconductors and other machinery and high-tech equipment.

Some European leaders say the proposals don’t go far enough. Lithuania’s foreign minister, Gabrielius Landsbergis, tweeted that a coal ban, sanctions against a few banks, and barring Russian ships “is not really an adequate sanctions package to the massacres that are being uncovered. A feeble response is just an invitation for more atrocities.”

A former CNBC and Fox News employee was arrested last month in London for working as a television producer for Malofeyev.

Previous sanctions had targeted other people close to Putin, including Alisher Usmanov, one of the wealthiest people in Russia, and Putin’s press secretary, Dmitry Peskov.

The Justice Department recently announced the creation of a team of federal agents and prosecutors to pursue wealthy Russians or anyone else who aids Russia’s invasion of Ukraine or uses cryptocurrency to help Russia evade sanctions. The team, called Task Force Kleptocapture, was set up to seize assets belonging to oligarchs.

On Monday, in the Mediterranean port of Palma de Mallorca, U.S. agents and Spain’s Civil Guard seized a 254-foot (78-meter) yacht owned by an oligarch and Putin ally whom the Justice Department accuses of violating laws on bank fraud, money laundering and sanctions. A boating website called Superyachtfan.com valued the ship, called Tango, at $120 million. 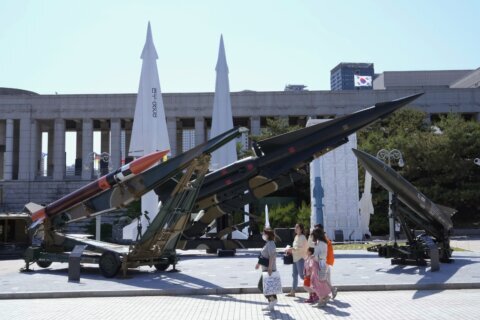