“Targeting and killing innocent civilians. Redrawing borders by force. Subjugating the will of a free people. This goes against core principles enshrined in the U.N. Charter. In Europe, we see Russia’s aggression as a direct threat to our security,” von der Leyen said in a speech to the Raisina Dialogue, a geopolitics conference in New Delhi.

She said Moscow’s “unprovoked and unjustified aggression against Ukraine” was bound to be a “strategic failure” and the European Union was “doing all we can to help Ukraine fight for its freedom.”

“This is why we needed to impose massive, sharp and effective sanctions,” von der Leyen said.

She said that sanctions, however, were not “standalone solutions” but part of a broader strategy that gives the European Union leverage to “achieve a diplomatic solution that will bring lasting peace.”

Her visit to India is seen as part of Western efforts to encourage New Delhi to reduce ties with Russia in response to its invasion of Ukraine.

Modi has called the situation in Ukraine “very worrying” and has appealed to both sides for peace. But India has so far refrained from condemning Russia’s invasion. It also abstained when the U.N. General Assembly voted this month to suspend Russia from the Human Rights Council.

India receives relatively little of its oil from Russia, but ramped up purchases recently because of discounted prices. India is also a major buyer of Russian weapons, and recently purchased advanced Russian air defense systems.

India was an ally of Moscow during the Cold War but has since sought to maintain ties with both Russia and Western nations. 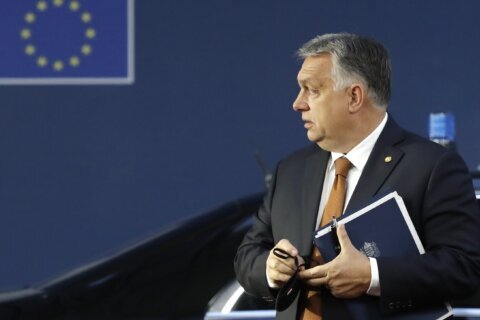