To convict, prosecutors will need to show that the attacks are not merely accidents or collateral damage. The emerging pattern, tracked day by day by the AP, shows evidence of a consistent and relentless onslaught against the very civilian infrastructure designed to save lives and provide safe haven to Ukraine’s most vulnerable.

AP journalists in Ukraine have seen the deadly results of Russian strikes on civilian targets first hand: the final moments of children whose tiny bodies were shredded by shrapnel or had limbs blown off; dozens of corpses, including those of children, heaped into mass graves.

Deliberate attacks on hospitals will likely be a top priority for war crimes prosecutors.

This story is part of an ongoing investigation from The Associated Press and Frontline that includes the War Crimes Watch Ukraine interactive experience and an upcoming documentary.

This accounting of attacks on medical facilities is part of a larger effort by the AP and the PBS series Frontline to track evidence of potential war crimes committed during the one of the largest conflicts in Europe since the end of World War II.

The War Crimes Watch project launched by AP and Frontline includes details of apparent targeted attacks as well as indiscriminate destruction of civilian buildings and infrastructure. The AP/Frontline online database will continue to be updated as long as the conflict lasts. The goal is to provide an independent accounting of events, apart from potentially inflated claims by advocates, or misinformation spread by state-backed propaganda.

The United Nations High Commissioner for Human Rights confirms at least 1,035 civilians, including 90 children, have died in the four weeks since the start of the war. Another 1,650 civilians have been wounded. Those numbers are certainly an undercount since scores of bodies now lie under the rubble of demolished buildings or were hurriedly buried in mass graves.

Still, Russian officials have denied hitting civilian targets, deriding the mounting documentation of atrocities as “Fake News” and claiming without evidence that dead and wounded civilians photographed were “crisis actors.”

Military attacks on civilian populations and their property are generally forbidden under international laws governing armed conflicts going back more than a century. Attacks on medical facilities and staff are considered particularly heinous under international law, which stipulates they must be protected. Still, bombing a hospital is not necessarily a war crime. Prosecutors must show that the destruction is intentional or reckless.

But the evidence of such attacks in Ukraine verified by AP and Frontline is both mounting and horrendous, and belies Russian claims that they were staged, self-inflicted or militarily justified.

Among the most thoroughly documented strikes was the March 9 bombing of a children’s and maternity hospital in Mariupol. Two AP journalists, the last international media to remain in the city after it was encircled by Russian forces, arrived at the hospital minutes after the explosion.

They saw a smoldering two-story deep crater in the interior courtyard, surrounded by the twisted and burned remains of several cars. The force of the explosion tore the facades off three surrounding buildings, blowing out the windows and wrecking rooms inside.

The AP journalists took photos and video of stunned survivors coming out of the hospital. A pregnant woman being carried on a stretcher held her belly, blood staining her sweatpants, her face pale. She later died, as did her baby.

Another pregnant woman, Mariana Vishegirskaya, her face bloodied, clutched her belongings in a plastic bag and made her way down a set of debris-strewn stairs and out of the ruined hospital.

Vishegirskaya was taken to another nearby hospital, Mariupol Regional Intensive Care, where she gave birth the following day to a baby girl she named Veronika.

Kremlin officials admitted Russian aircraft had struck the hospital but insisted all patients and staff had been evacuated prior to the bombing. At a U.N. Security Council meeting the day after the strike, Russian ambassador Vassily Nebenzia claimed the wounded pregnant women were “crisis actors,” playing the part of victims to frame Russia.

The assaults on medical facilities in Ukraine began with at least two attacks on the very first day of the war.

On Feb. 24, a local media organization posted a photo on Twitter of City Children’s Hospital No. 1 in Donetsk, struck by an artillery shell that damaged its top floor. AP found that the photo matches the pictures of the hospital from before the war.

Another photo posted on Twitter showed a large explosion and fire at Central City Hospital in Vuhledar, along with the crumpled nose cone of a rocket. Four civilians were killed.

The stockpiling and use of cluster munitions is banned under an international convention signed by 110 countries, but Russia and Ukraine are not among them. However, their use in civilian areas is by definition indiscriminate — a violation of international humanitarian law.

AP video from March 11 shows damage to ambulances and buildings at Dergachi Central Hospital, including expended cluster rocket canisters impaled in the ground. Weakley identified them as Russian-made 9M27K cargo rockets, which carry the same bomblets found in Kharkiv.

David Crane, who served as chief prosecutor of a United Nations-sponsored war crimes tribunal over atrocities committed during Sierra Leone’s civil war, said what is happening in Ukraine is worthy of prosecution.

“The bottom line is this is medieval warfare in the Ukraine,” Crane said. “It’s precisely the sort of warfare that the laws of armed conflict were designed to prevent.” 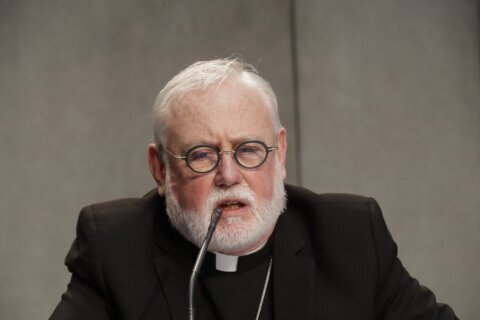 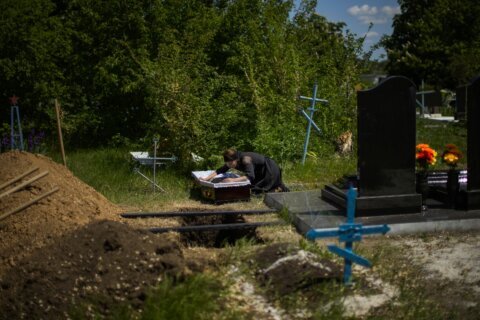