DROHOBYCH, Ukraine (AP) — The theater was empty. The seats were covered against dust. But it was a moment of…
Listen now to WTOP News WTOP.com | Alexa | Google Home | WTOP App | 103.5 FM

DROHOBYCH, Ukraine (AP) — The theater was empty. The seats were covered against dust. But it was a moment of drama that Alla Shkondina had prepared for all her life.

“There is a saying that when the guns sound, the muses are silent,” the Ukrainian actress said, standing on the bare stage with a shawl wrapped around her to protect against the chill. “But we are not silent.”

She has retreated from the spotlight and now makes dumplings to send to soldiers, working alongside fellow artists in the Drohobych repertory theater’s cafe. It’s one small part of a massive war effort by defiant volunteers across the country who often find themselves playing unexpected roles.

In the theater’s warmly lit cafe, where snack bar popcorn has gone stale in the nearly month since Russia’s invasion, artists in this community near the foot of the Carpathian Mountains in southwestern Ukraine were rolling and filling dough to add to the thousands of dumplings they’ve sent to the front, or to displaced people in need.

“We did more than 3,000 pounds of meatballs,” said theater director Mykola Hnatenko. “One hundred fifty kilograms of stewed cabbage with meat. More than 10,000 verenyky (dumplings) with potato. Seventy kilograms of filling for borscht. Eighty kilograms of fried fish. Two thousand pancakes with meat, and 500 sweet pancakes. Now we’ve decided to do more food with proteins like meat.”

In the courtyard, men, their hands blackened with soot, chopped wood for the cooking fires, overseen by the theater’s deputy director, Sergei Havdjak, dressed in military-style drab.

Hnatenko seemed especially proud of the borscht the volunteers were sending to soldiers in places like the capital, Kyiv, where some areas have collapsed into brutal street-to-street fighting in near-freezing weather. He showed a cellphone video of a distribution of food in Kyiv, with a smiling soldier flashing a “V” for victory sign.

The food-making effort began on the second day of Russia’s invasion. It takes about 150 volunteers, including artists who have been displaced from other parts of Ukraine and now live at the theater, Hnatenko said.

“It inspires us that we also contribute somehow to the victory of the country,” he said.

The theater workers have been shaken by the war and the accounts of people joining them after fleeing from other parts of Ukraine. Shkondina, the actress, described the children arriving with “adult eyes” full of terror, needing time to feel normal again.

“This is like the war I read about in books, or heard about from my grandparents,” she said.

While Shkondina was not used to making dumplings — “Because we are actors, we do not have time to do such things,” she said — she and others gladly put on performances for the displaced children whose families have fled to Drohobych, to help distract them from the war.

The performances drew from the nostalgia for life before Russia invaded.

On a gold-colored sofa by a piano, in a pool of quiet near the bustle of food preparation, Vasil Nevolov sat alone and contemplated the past. After 50 years of living in Kyiv as an arts critic and professor, he abruptly had to flee.

He worried about his grandchildren, who remained in Kyiv. They cannot leave. Their mother is a medical worker, their father a new member of the territorial defense. He is proud of their work, and proud of the work of the volunteers around him.

“Despite my age, which is already quite respectable, 74 years, I want to be useful to the theater,” Nevolov said of his new community. 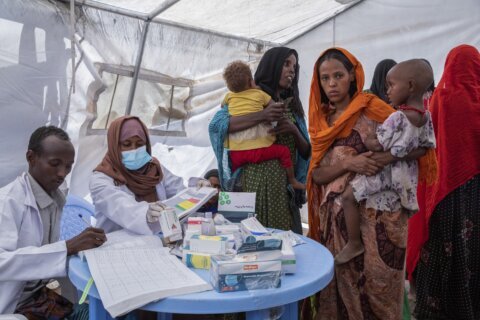