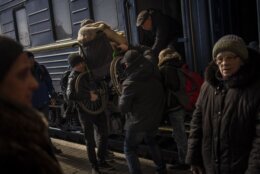 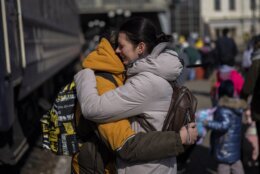 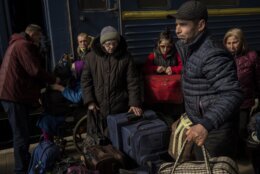 LVIV, Ukraine (AP) — The heat on the train was as thick as the anxiety. Ukrainian survivors of one of the most brutal sieges in modern history were in the final minutes of their ride to relative safety.

Some carried only what they had at hand when they seized the chance to escape the port of Mariupol amid relentless Russian bombardment. Some fled so quickly that relatives who were still in the starving, freezing Ukrainian city on the Sea of Azov aren’t aware that they have gone.

“There is no city anymore,” Marina Galla said. She wept in the doorway of a crowded train compartment that was pulling into the western Ukrainian city of Lviv.

The relief of being free from weeks of threats and deprivation, of seeing bodies in the streets and drinking melted snow because there was no water, was crushed by sadness as she thought of family members left behind.

“I don’t know anything about them,” she said. “My mother, grandmother, grandfather and father. They don’t even know that we have left.”

Seeing her tears, her 13-year-old son kissed her over and over, offering comfort.

Mariupol authorities say nearly 10% of the city’s population of 430,000 have fled over the past week, risking their lives in convoys out.

For Galla, the memories are too fresh.

For three weeks, she and her son lived in the basement of Mariupol’s Palace of Culture to hide from the constant Russian shelling, moving underground after the horizon turned black with smoke.

“We had no water, no light, no gas, absolutely no communications,” she said. They cooked meals outside with wood in the yard, even while under fire.

Even as they finally fled Mariupol, aiming to reach trains heading west to safety, Russian soldiers at checkpoints made a chilling suggestion: It would be better to go to the Russian-occupied city of Melitopol or the Russian-annexed Crimean Peninsula instead.

It’s a suggestion that residents found ludicrous after the Russians on Wednesday bombed a Mariupol theater where children and others were sheltering, and after authorities on Sunday said an art school holding hundreds of people in Mariupol had been bombed.

For hours on Sunday’s train journey, survivors shared their experiences with fellow passengers. Even residents of other Ukrainian cities that have been battered or occupied by the Russians see Mariupol as a horror apart.

One resident of Melitopol, Yelena Sovchyuk, shared a train compartment with a Mariupol family. She bought them food, she said. They had nothing, only a small bag.

“Everyone from there is in deep shock,” Sovchyuk said.

She recalled seeing convoys from the besieged city on the road. “There’s a way to tell a Mariupol car,” she said. “They have no glass in their windows.”

With deep disdain, Sovchyuk said Russian soldiers amid such devastation were still encouraging Ukrainians to come to Russia, claiming it would be for their safety.

The Mariupol City Council has asserted that several thousand residents were taken into Russia against their will over the past week. On Sunday, the Russia-backed separatists in eastern Ukraine said 2,973 people had been “evacuated” from Mariupol since March 5, including 541 over the last 24 hours.

The train of survivors on Sunday afternoon approached the central station of Lviv, the city near Poland that has absorbed an estimated 200,000 people fleeing other areas of Ukraine. As they climbed off one by one into the arms of family and friends after weeks of fearing for their lives, some Mariupol survivors wept.

A mother embraced a red-faced, teary teenage boy at the foot of the steps. An elderly woman in a kerchief, helped off the train, walked away in silence. Another stood motionless among her bags, blinking behind thick glasses. Her neighbor, who fled with her, described cars in their convoy coming under fire.

Her hair askew, clutched by family, Olga Nikitina cried on the platform.

“They began to destroy our city, completely, house after house,” the young woman said. “Battles took place over every street. Every house became a target.”

Gunshots blew out the windows. When the temperatures in her apartment dropped below freezing. Nikitina moved in with her godmother, who has cancer and takes care of her elderly father. Ukrainian soldiers later came and warned them that their house would come under fire.

“Either hide or move out,” the soldiers said.

Nikitina left. The others were too fragile to flee. Now, like so many Mariupol survivors who escaped, she doesn’t know the fate of those left behind.

This version corrects the age of Galla’s son to 13. 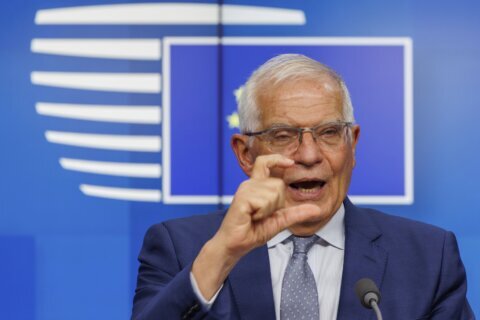