ROME (AP) — An Italian Parliament committee that deals with intelligence matters summoned former Premier Giuseppe Conte on Thursday over growing concerns that a Russian military and medical team sent to help Italy early in the COVID-19 pandemic was really on a spying mission.

Conte was serving as Italy’s populist leader when the pandemic began in 2020 and overwhelmed the country’s health system, which was then desperate for masks, respirators and sanitizing material.

Proceedings of the Parliamentary Committee for the Security of the Republic are usually closed-door since they involve national security.

It wasn’t immediately known if Conte or lawmakers on the committee would brief journalists on the hearing, which was scheduled to start Thursday evening.

The Russian mission involved some 100 army personnel and medical workers. It came under renewed scrutiny recently after a Russian foreign ministry official publicly threatened Italy’s defense minister, Lorenzo Guerini, if Italy pressed ahead with tough sanctions over the Russian invasion of Ukraine.

The Russian ministry official simultaneously implied Italy was being ungrateful for the pandemic aid.

In March 2020, Russia offered to send Italy some 400 personnel and equipment. Guerini objected and succeeded in getting the Russian team reduced to about 100 members. An Italian general also successfully argued against Russia’s proposal to sanitize not just hospitals and nursing homes, as first agreed upon, but also Italian government offices, Italian daily newspaper Corriere della Sera has reported.

Recently, a member of a special Italian committee of health and civil protection experts which advises the government on the pandemic described the Russians’ attitude about the aid mission as aggressive.

At the time of the Russian mission, concerns arose in Italy that Russian soldiers were operating some 50 kilometers (35 miles) from a U.S. military base in northern Italy. Italy is a NATO member.

The Russians pushed to carry out a similar pandemic-aid mission in southern Italy, where the coronavirus outbreak was relatively mild at the time. Guerini, who opposed expanded the aid mission, essentially told the Russians, “Thank you, but no thank you,” Corriere reported on Thursday.

The Russian team left after a few weeks.

According to Italian news reports, Russia’s defense minister, Sergei Shoigu, contacted Guerini at the start of the pandemic to offer a shipment of masks, and Guerini said Italy would send a plane to Russia to retrieve them.

The leadership of the 5-Star Movement, which is in the pandemic-unity coalition partner of Italy’s current premier, Mario Draghi, officially backs sanctions against Russia. But some 5-Star lawmakers have opposed military aid for Ukraine. Several present or former 5-Stars are openly pro-Putin and didn’t attend Ukrainian President Volodymyr Zelenskyy’s address to the Italian Parliament by video hookup earlier this week.

Conte himself recently expressed reservations about any boosting of Italian military spending, emphasizing the needs of citizens struggling with soaring energy costs and the economic fallout of the pandemic.

In Conte’s first government, a key ally was right-wing leader Matteo Salvini, who openly admired Putin and had close ties to Russia. 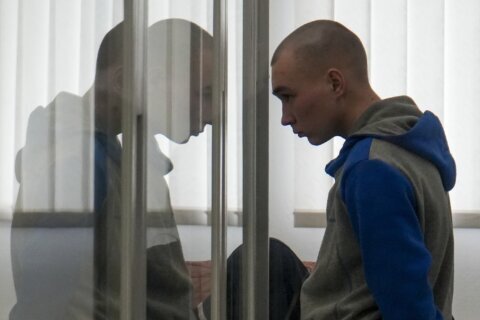