Kyiv — A Russian airstrike on a residential building in Ukraine‘s capital city killed at least one person and wounded several others on Monday. Russia insists it doesn’t target civilians, but its forces have intensified their attacks on urban areas since Vladimir Putin ordered the invasion of Ukraine on February 24.

Another round of direct talks between Ukrainian and Russian officials took place on Monday. Both sides had reported “substantial progress” after several previous rounds, and there was even hope for some agreement within a matter of days. After the talks on Monday, which were held virtually for the first time, Ukrainian presidential adviser Mykhailo Podolyak said there would be a “technical pause” in the bilateral dialogue until Tuesday, adding: “Negotiations continue.”

The previous rounds have enabled limited “humanitarian corridors” for civilians to evacuate some of the hardest-hit cities. While many of those efforts have failed quickly, with both sides blaming the other for cease-fire violations, evacuations appeared to be ramping up on Monday.

Ukrainian officials said about 160 vehicles had finally managed to get people out of the besieged southern coastal city of Mariupol on Monday, and Russian news agency Interfax quoted the Defense Ministry in Moscow as saying Mariupol had been “unblocked.” 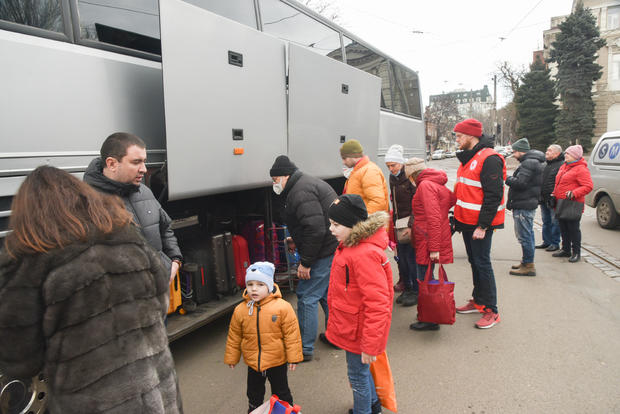 Civilians are seen during an evacuation organized by the Red Cross to pass into Moldova due to ongoing Russian attacks on Ukraine, Odesa, Ukraine, March 14, 2022.

Even in the frontline towns near Kyiv, regional governor Oleksiy Kuleba said Monday that evacuations were going ahead for a fifth consecutive day.

“The ceasefire in our region is holding, albeit it is very conditional,” Kuleba said on television, adding that explosions could still be heard in the distance.

But despite the glimmers of hope, CBS News senior foreign correspondent Charlie D’Agata said the war seemed to be escalating by the hour. As the apartment building in Kyiv was hit Monday morning, Kremlin spokesman Dmitry Peskov insisted again that Russian artillery was only taking aim at military targets. 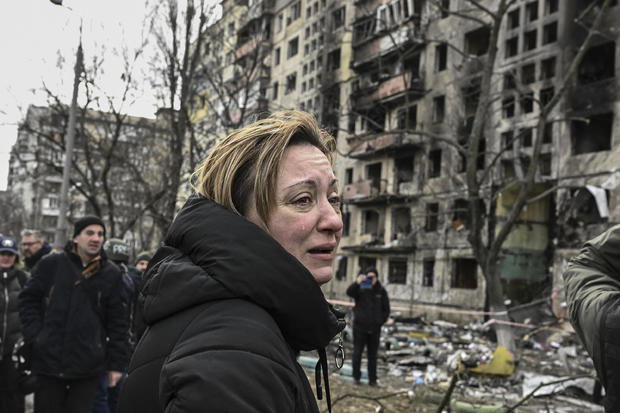 A woman reacts as she stands outside destroyed apartment buildings following shelling in Kyiv, Ukraine, March 14, 2022.

Peskov repeated a claim issued earlier Monday by a mayor in Ukraine’s eastern Donbas region, which is held by Russian-backed separatists, that Ukrainian forces had fired a rocket at the city of Donetsk, “which killed and wounded civilians.”

Donetsk’s pro-Russian mayor Aleksey Kulemzin said earlier that a Ukrainian missile had been shot down near Donetsk’s city hall, creating a shower of debris that he said killed 17 people left 28 more injured.

“Of course, this is an attack on the civilian population,” Peskov said. Russia has been accused of carrying out missile and airstrikes on residential buildings, hospitals and even schools for weeks, with the United Nations confirming about 600 civilians and acknowledging the true toll is likely much higher.

Kyiv came under fire Monday on the heels of a massive round of Russian airstrikes that hit a Ukrainian military base right on Poland’s doorstep, drawing the U.S. and its NATO allies closer than ever to the violence of this war. At least 35 people were killed in the Sunday strikes on the base, which has been used by American and NATO forces to train Ukrainian troops. 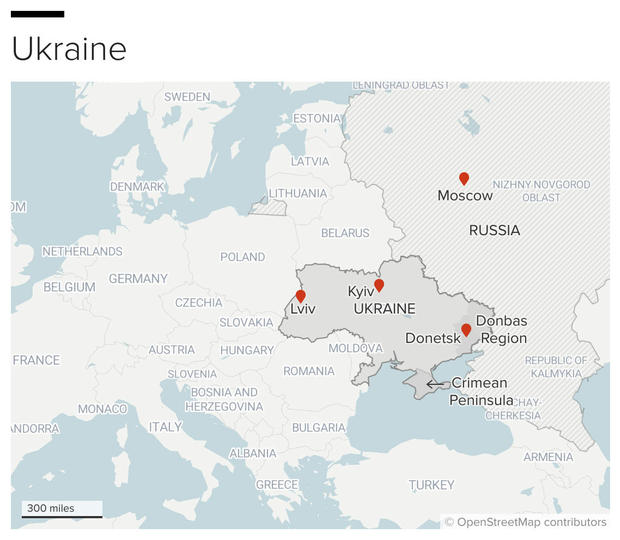 The message from Moscow could not have been clearer. The strikes on the base — just 12 miles from the border with Poland, where the U.S. has deployed troops to bolster NATO’s defenses — came a day after Russia warned that weapons and “mercenaries” flowing into Ukraine from Western nations would be considered “legitimate targets.” Ukrainian officials said Russian warplanes fired about 30 missiles, 22 of which were intercepted by Ukraine’s air defenses.

The smile on Ukrainian President Volodymyr Zelensky’s face as he visited wounded troops in a hospital on Sunday, trying to boost spirits, was gone by the time he delivered a stark new warning overnight:

“I repeat again: If you do not close our skies, it is only a matter of time before Russian missiles fall on your territory, on the territory of NATO and on the homes of citizens of NATO countries,” Zelensky said. The Ukrainian leader has warned for months that Putin’s intentions may go well beyond Ukraine’s borders.

The Red Cross said time was running out for hundreds of thousands of residents in Mariupol. Regional officials have reported at least 2,500 people killed in that city alone since in came under attack. Food, water and electricity supplies were all running out. 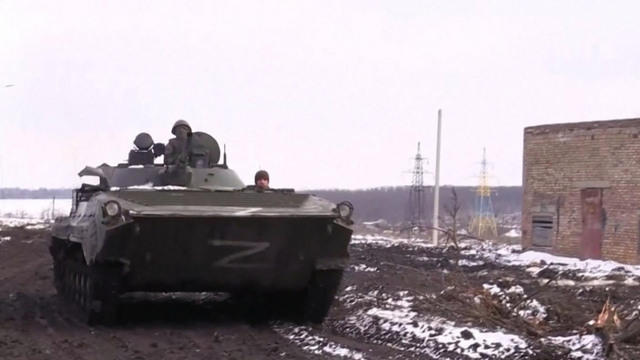 Over the weekend, soldiers carried away the dead and wounded in the town of Irpin, just northwest of Kyiv, where residential neighborhoods have come under heavy bombardment for days.

Many of those who’ve managed to escape the shelling and sniper fire in Irpin and nearby Bucha come to the neighboring village of Bilohorodka — some of them hitching rides in the back of cargo trucks as they don’t have vehicles of their own. Upon arrival, they’re handed warm drinks, water and something to eat. They’re safe, for now, and looked after by neighbors who’ve chosen to stay behind to help, knowing full well they’re right in the path of Russia’s merciless advance toward the capital.

“I’m begging to be heard,” said Eliana, a local helping those who have fled to her village. “Close our skies so our kids can sleep calmly — so the whole country can live.” 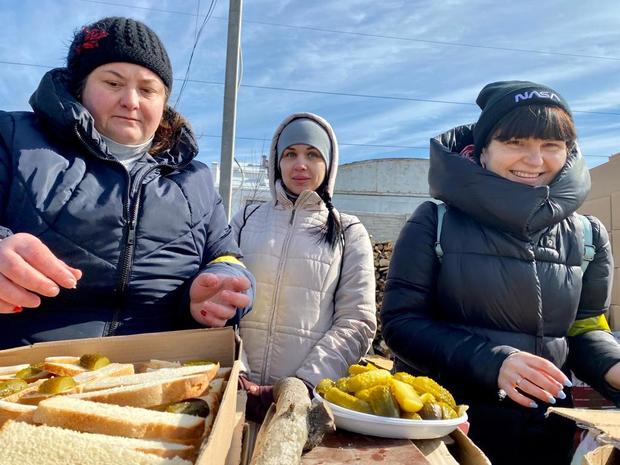 Ukrainian women volunteer to help feed evacuees from the nearby towns of Irpin and Bucha arriving to their village of Bilohorodka, just outside Ukraine’s capital of Kyiv, amid Russia’s ongoing invasion and bombardment of Ukraine, March 14, 2022.

Alyona, another woman who was volunteering to help the evacuees, told D’Agata that while adults can at least understand what’s happening to their country and try to help, children are scared.

“We try to explain that we have the greatest army, and they will protect us and defend us,” she told CBS News. “And they believe us.”

“We are frightened, very much,” she admitted. But leaving, for her, was never an option, “because we are Ukrainians. We can’t do anything else. We can’t go when, like, our people are dying here. We can’t go away, we need to help them, it’s our responsibility.”

“I’m a real Ukraine and I love so much my homeland and my people,” agreed Natalia, another volunteer. “We didn’t flee away. We are Kyivites… We are staying here, to the last person!”

As they helped prepare food for the evacuees from Irpin, Oxana, another villager, repeated the plea made by her neighbor Eliana — one that is also made often by Ukrainian government officials:

“I’m asking your help. Stop this madhouse, give us no-fly zone, close the sky so we can handle the rest,” she told D’Agata, adding that regardless of any foreign assistance, she and her neighbors would stand firm. “We are so powerful. Not one of us will lower his head for Russians, nor in front of anyone. We don’t surrender. On our land, staying until last minute.” 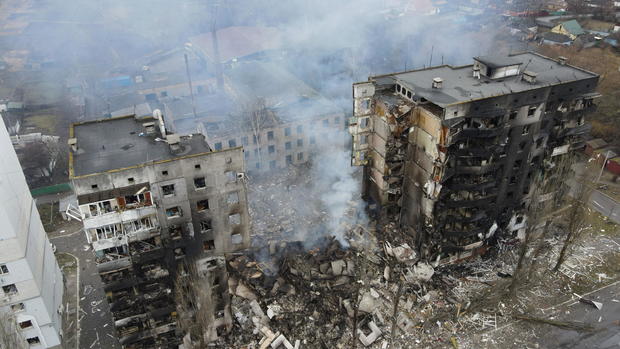 Photos: Inside the Russian invasion of Ukraine

D’Agata asked the volunteers if they would stay in their town, no matter what. They all replied “yes,” without hesitation.

The United Nations says 2.7 million people have now fled Ukraine into neighboring nations, but that doesn’t include the millions of people who have left their homes behind to seek refuge in other parts of their own country. 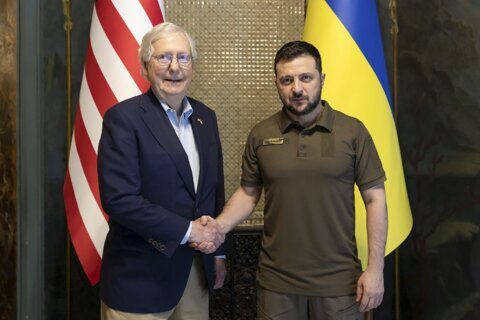