Japanese udon noodles are all about the chew, but it’s hard to replicate the texture with what’s available in American…
Listen now to WTOP News WTOP.com | Alexa | Google Home | WTOP App | 103.5 FM

Japanese udon noodles are all about the chew, but it’s hard to replicate the texture with what’s available in American markets.

Fresh udon is hard to come by. So for this recipe from our book “Milk Street Tuesday Nights,” which limits recipes to 45 minutes or less, we needed a solution for more widely available dry udon.

Enter the Italian technique of cooking the noodles only until al dente — still quite firm. To further firm up the texture, we chilled them by rinsing them with ice in the strainer under cold water. Even after reheating the noodles in the cooked sauce, they retained that pleasant toothsome quality that makes this vegetarian dish feel so hearty.

With the texture settled, we opted for an umami-rich sauce of soy sauce, dried shiitake mushrooms and the semisweet rice wine mirin, all balanced by a little sugar. Fresh shiitake and mild-tasting baby bok choy kept the stir-fry light.

To balance the savoriness, we turned to pickled ginger, which you can find jarred in the Asian foods section of grocery stores. For extra flavor, sprinkle on the Japanese spice blend shichimi togarashi at the table.

Be sure to start checking the udon for doneness well before the suggested cooking time. They will cook slightly more once they’re added back to the sauce.

2 tablespoons plus 2 teaspoons grapeseed or other neutral oil, divided

2 scallions, thinly sliced on a bias

In a large pot, bring 4 quarts of water to a boil. Add the udon, stir well and cook until al dente. Drain using a colander, then add 2 cups of ice to the noodles. Run under cool water, tossing, until they are chilled. Drain well, then transfer to a large bowl. Toss with 2 teaspoons of the oil, then set aside.

In a small saucepan over medium, combine the soy sauce, ¼ cup water, mirin and sugar. Bring to a simmer, stirring, then add the dried mushrooms, pushing them into the liquid. Remove from the heat, cover and set aside until the mushrooms have softened and cooled, 20 to 30 minutes.

Remove the mushrooms from the soy sauce mixture, squeezing them to allow any liquid to drip back into the pan. Remove and discard the stems, then finely chop. Transfer to a medium bowl and set aside.

Set the now-empty skillet over medium and add the udon, gently tossing with tongs. Add the vegetable mixture, gently toss a few times, then add the soy sauce mixture and white pepper. Cook, tossing constantly, until the noodles are heated and have absorbed most of the liquid, about 2 minutes. Transfer to serving bowls and sprinkle with scallions and sesame seeds. Serve with pickled ginger. 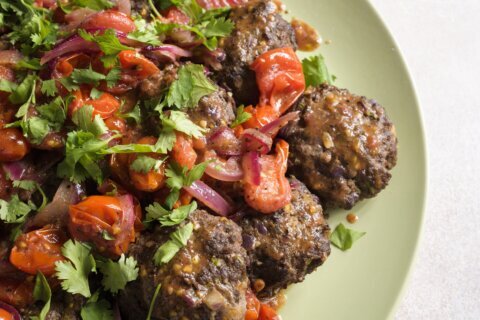 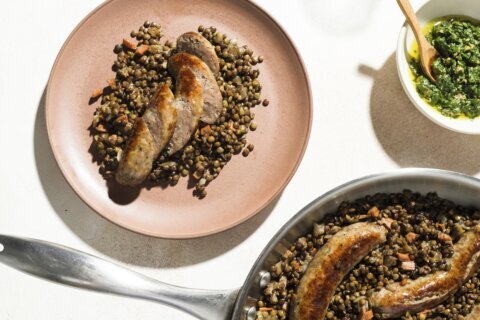 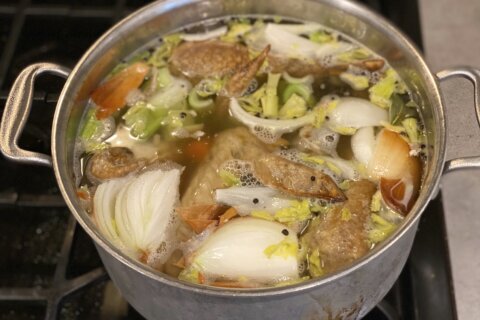 Turkey stock: Easy, economical way to use more of the bird