From turkey and cranberry sauce straight to potato pancakes in one weekend. Not bad!

Hanukkah this year begins Sunday night, Nov. 28, so those who celebrate can move right into the holiday while still contemplating Thanksgiving leftovers.

Potato pancakes, or latkes, are the food most traditionally associated with Hanukkah. The story goes that over 2,000 years ago, after the Second Temple of Jerusalem was ransacked by invaders, there was only enough oil to keep the temple menorah lit for one day and night. Inexplicably, the oil burned for eight days and eight nights, thus earning the holiday the name “festival of lights.”

Food cooked in oil, like doughnuts and latkes, are symbolic of this miracle of Hanukkah.

In recent decades, many home cooks and chefs have played around with the ingredients in latkes, using vegetables like beets, zucchini, and butternut squash, and adding fresh herbs or different seasonings. Toppings are another way to put a modern stamp on latkes — swapping in tzatziki for sour cream, for example.

In my family, updates would be welcomed as a supplemental option, but not as a substitute for the non-negotiable, old-school potato pancake with traditional toppings.

By the way, you don’t have to be Jewish or celebrating Hanukkah to think about latkes, of course. Little crispy potato pancakes make a wonderful appetizer, a great side dish — just a big old treat all year long.

So, what cooking oil should you use?

My way is a little indulgent and veers towards the untraditional, but I like to cook latkes in mostly olive oil with a tiny bit of butter added for flavor. Keep an eye on the heat level of the pan; you want it high enough to cook up crisp pancakes, but not so high that it smokes and turns brown.

Do not whip out the fancy bottle of extra virgin olive oil; a less expensive bottle of pure olive oil, available in grocery stores everywhere, works just fine for frying. You can also use vegetable or canola oil.

Serve latkes with sour cream and applesauce, so people can choose or mix them. If you’re feeling a little fancy schmancy, you might serve these up with some budget-friendly caviar, or smoked salmon or gravlax, and maybe swap out the sour cream for crème fraiche. (Skip the butter and sour cream if you are serving meat with the latkes and keeping the meal kosher.)

Finally, leftover cranberry sauce is a terrific complement to latkes. I’ll be testing this notion the last week of November, and if you give it a shot, let me know what you think!

Other items on a traditional Hanukkah menu might include noodle kugel,beef brisket with wild mushrooms, Jewish beef brisket, chicken marbella, or chicken thighs with onions and green olives.

Olive oil for cooking (about ½ cup)

Sour cream and/or applesauce to serve

Using the grating blade of a food processor or a handheld grater, grate the potatoes on the large-holed blade or side. Place the grated potatoes into a large bowl, and let them sit while they release their liquid.

Insert your finger into the liquid left in the other bowl. You’ll feel a firm layer of potato starch at the bottom. Carefully pour off the liquid from the top and then scrape up all that valuable starch from the bottom of the bowl and mix it well with the egg and potato mixture (hands are best for this). This natural starch helps bind together the potatoes. If there is only a tablespoon or two of the starch, you’ll also want to blend in the optional matzoh meal or flour. Generously season with salt and pepper.

In a large skillet (or two if you want to speed up the process), heat a couple of tablespoons of olive oil and a teaspoon or so of butter until the butter has melted and the fat is hot. Swirl the pan, and then add spoonfuls of the potato mixture — as big or small as you wish — and gently press them into round flat shapes in the pan. Cook until golden brown and crisp, about 4 to 5 minutes on each side. You’ll need to keep a close eye on the heat; too low and they won’t brown properly, too high and the oil will start smoking.

Drain the potato pancakes briefly on paper towels, and transfer to a serving platter. Repeat until all of the potato mixture is used up, adding more oil and bits of butter as you need it (periodically, you may want to dump out the pan, give it a quick wipe, and start over if you’re finding that the oil is getting kind of dark and that too many bits of charred potato and onion are floating around). The potatoes will continue to release liquid as they sit; as you get to the bottom of the bowl, just give the potato mixture a quick squeeze before putting it in the hot pan, to avoid splattering. And the potatoes may start to brown, but when you cook them up it won’t be very noticeable.

Serve the warm potato pancakes with sour cream and/or applesauce. 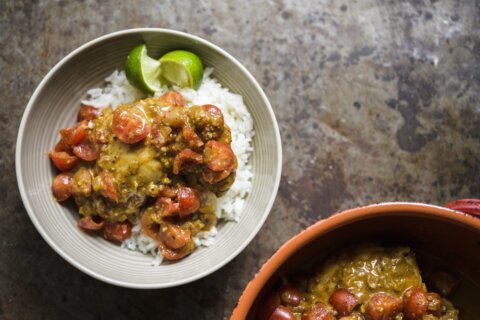 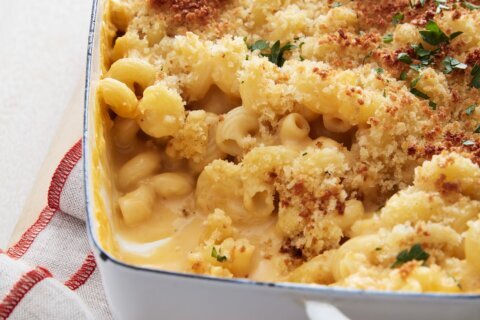 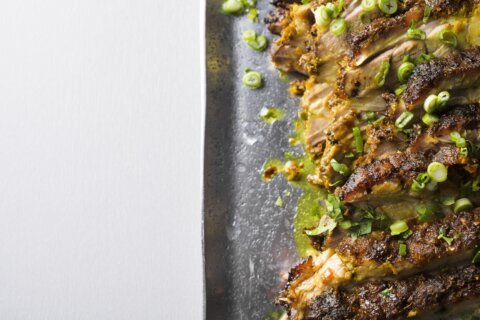