There’s nothing poor about this Italian cucina povera

Cucina povera, as so much of the cooking in Italy is, too often is translated too literally: poor kitchen. But…
Listen now to WTOP News WTOP.com | Alexa | Google Home | WTOP App | 103.5 FM

Cucina povera, as so much of the cooking in Italy is, too often is translated too literally: poor kitchen. But that’s not a reflection of the food or the people who prepare it. It’s more about making delicious whatever you happen to have around.

Such is the case with the Tuscan soup known as ribollita, a robust peasant dish that makes the most of two of the humblest ingredients — beans and leftover bread. The name means “reboiled,” since this soup originally comes from reheating bean soup and adding bread. But in this recipe from our book “Milk Street Tuesday Nights,” we start from scratch and still manage to get a tasty dinner on the table in just over half an hour.

Historically, stale bread was crumbled and mixed into the soup to turn it nearly into a porridge. Some Italians say this “soup” should be thick enough to eat with a fork. But we preferred toasting cubes of ciabatta or another rustic bread in olive oil and using the resulting croutons as a garnish so the bread better retained its texture.

Though any variety of sturdy greens works, we liked red Swiss chard for the color it added and for its crispy stems, which we sauté with onions and bell pepper for additional texture and flavor. Great Northern beans held their shape nicely, but feel free to use cannellini instead. If you like, serve topped with grated Parmesan cheese.

In a medium bowl, stir together 2 tablespoons of the oil, the paprika, and ¾ teaspoon each salt and pepper. Add the bread and toss to coat. Heat a 12-inch skillet over medium, then add the bread and cook, stirring, until crisp and brown, about 7 minutes. Transfer to a plate.

In a large Dutch oven over medium-high, heat the remaining 3 tablespoons of oil until shimmering. Add the onion, bell pepper and chard stems. Cook, stirring, until the vegetables are softened and beginning to brown, about 5 minutes. Stir in the garlic and fennel seeds and cook until fragrant, about 30 seconds.

Add the chard leaves and cook, stirring, until beginning to wilt, 1 to 2 minutes. Add the broth and bring to a simmer, then reduce to medium. Stir in the beans, cover and cook until the chard leaves are tender, 7 to 9 minutes.

Off heat, taste and season with salt and pepper. Ladle into bowls, drizzle with oil and sprinkle with the croutons. 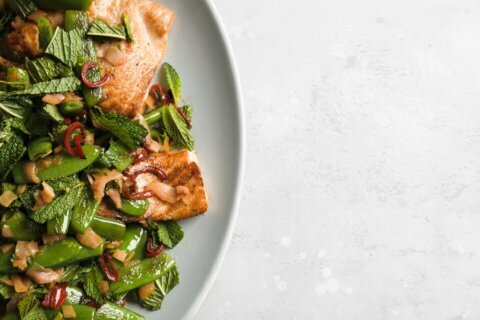 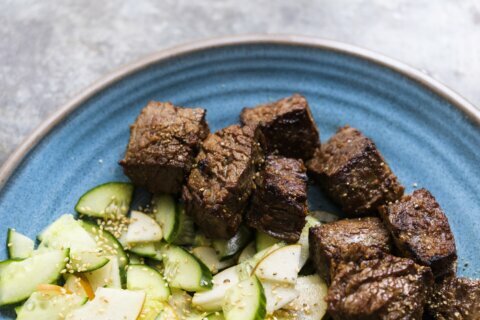 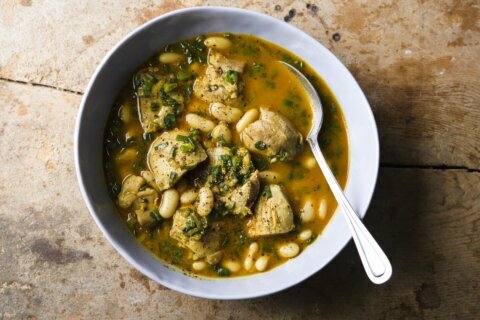