TOPEKA, Kan. (AP) — Even though U.S. Secretary of State Mike Pompeo has declared a Senate run to be “off…

TOPEKA, Kan. (AP) — Even though U.S. Secretary of State Mike Pompeo has declared a Senate run to be “off the table” next year, many fellow Republicans in Washington and his home state of Kansas aren’t buying it.

Majority Leader Mitch McConnell is among the GOP senators encouraging the former congressman to rethink a run for Kansas’ open Senate seat. A top Senate Republican strategist who spoke to The Associated Press on condition of anonymity because the person isn’t authorized to discuss the situation said McConnell has called Pompeo several times, promoting the Senate as a place where he could be involved in big issues.

For Republicans, wooing President Donald Trump’s top diplomat to run for Senate stems in part out of fear that a crowded field could lead to the nomination of a more divisive Trump ally, Kris Kobach.

The former Kansas secretary of state and advocate of tough immigration policies lost the governor’s race last year to Democrat Laura Kelly. Some in the party are afraid he’ll again tap a conservative base, emerge from a crowded primary, alienate moderate voters and lose an otherwise safe seat that Republicans likely need to maintain their narrow Senate majority.

“Pompeo getting into the race solves the problem,” said David Kensinger, a GOP critic of Kobach and adviser to ex-Kansas Gov. Jeff Colyer, who narrowly lost last year’s primary to Kobach.

He is considered a shoo-in for the nomination because other potential GOP hopefuls such as Roger Marshall, a western Kansas congressman who has $1.4 million in campaign funds for a possible run, have signaled they won’t be candidates if Pompeo enters the field.

Buzz about Pompeo built again with the announcement that he would speak Sept. 6 at Kansas State University at a public affairs lecture series. The timing raised expectations that Pompeo would make his plans known before then, rather than let the guessing game extend into the fall.

Sheila Burke, a former chief of staff to former Senate Majority Leader Bob Dole, a Kansas Republican, acknowledged that the Senate is a “smaller universe” than the secretary of state’s office and offers “less ability to command.” But, she said, it does provide a platform to address important issues and Pompeo would have unique expertise.

“It allows him an independence that he doesn’t have as a Cabinet secretary, in some respects,” said Burke, now on the faculty of Harvard University’s John F. Kennedy School of Government.

At a recent Kansas event in Washington to celebrate University of Kansas basketball coach Bill Self, Pompeo gave a speech that drew on his home-state ties. And Republicans also have seen the speech in early September as another possible signal.

“Either Mike is testing the waters or he’s just really messing with people back here for fun,” said Kelly Arnold, a former Kansas Republican Party chairman. “A lot of these donors are sitting on their checkbooks waiting to see what Mike does.”

While Trump has proven to be a fickle boss and the president’s re-election is far from a lock, Pompeo would be contemplating leaving a Cabinet post with international visibility for a Senate that has of late struggled to attract states’ top political talent.

There’s also the question of Pompeo’s own presidential aspirations, and which job would be a better springboard. The Washington Examiner reported in late July that he said he is open to running for president after Trump leaves office.

The scrum in Kansas began when four-term GOP Sen. Pat Roberts announced in January that he wouldn’t seek reelection in 2020, but it’s been left in suspended animation by the speculation about whether Pompeo really has decided against running. Kobach and other candidates have jumped in and have been campaigning in his shadow.

Kansas Republicans saw the 55-year-old Pompeo as a future Senate candidate before he left Congress in 2017 to become Trump’s CIA director and then secretary of state. He is a West Point graduate with a Harvard law degree, an Army veteran who built two businesses and served on the Republican National Committee.

Pompeo still has his U.S. House campaign committee, and it had nearly $1 million at the end of June that could be used for a Senate race. That’s a significant amount to start with in an inexpensive-media state like Kansas,

Republicans worry they could especially face difficulty keeping the Senate seat should Kathleen Sebelius, a former two-term governor who was President Barack Obama’s Health and Human Services secretary, agree to run, though a spokesman said Friday she is not thinking about it.

In addition to Marshall, other potential GOP candidates include Alan Cobb, president and CEO of the Kansas Chamber of Commerce, and Matt Schlapp, the American Conservative Union’s president. Kansas Attorney General Derek Schmidt also said he’s still considering the race but might not decide until early next year.

Wagle, Marshall, and Cobb have all said they wouldn’t run against Pompeo. LaTurner said he would immediately support Pompeo if Pompeo ran, adding that with the filing deadline in June, “right up to the last minute, he can decide to run.”

The GOP has won every U.S. Senate race in Kansas since 1932, and registered Republicans outnumber Democrats among the state’s 1.8 million voters by more than 3-to-2. But the 2020 vote will come two years after the GOP lost the governor’s office and a Kansas City-area congressional seat and had to work hard to hold an eastern Kansas seat.

Ray Shinn, a real estate appraiser in county GOP chairman in Nemaha County in northeast Kansas — where Trump received more than 80 percent of the vote in 2016 — believes the higher turnout in presidential race and a surge in voting for Trump would give Kobach a better showing in a Senate race. Kobach makes a similar argument.

Dalton Glasscock, the Sedgwick County GOP chairman, doesn’t either, but he said some fellow Republicans in the Wichita area question Kobach’s electability.

He said if Pompeo is the nominee, “We won’t have to focus on that race.” 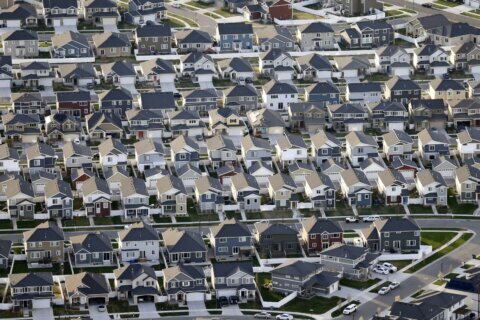 US home sales fell 1.3% in January