One man is dead and four police officers were injured in Prince George's County, Maryland, when a driver suspected to be under the influence of drugs struck them at the scene of a prior crash on Monday evening.
Listen now to WTOP News WTOP.com | Alexa | Google Home | WTOP App | 103.5 FM

One man is dead and four police officers were injured in Prince George’s County, Maryland, when a driver suspected to be under the influence of drugs struck them at the scene of a prior crash Monday night.

The driver of the striking vehicle is identified as Victoria Cross, 59, of Lothian, Maryland. And the driver of the vehicle that was struck was 60-year-old Marc Alexander, of Upper Marlboro.

Police said that Cross showed signs of impairment, and White, who was seated in his patrol vehicle, was about to begin sobriety tests when a southbound 2004 Pontiac Gran Prix struck the rear of his car.

The force of the crash flung White’s car forward toward the other three officers on the scene, sideswiping one of the vehicles involved in the original crash before striking Alexander.

Prince George’s County first responders and additional law enforcement responded and transported all five of the injured to the hospital, where Alexander later died of his wounds.

The driver of the Pontiac is identified as Iretha Springs, 38, of Capitol Heights, Maryland.

Editor’s note: An earlier version of the story misidentified Marc Alexander as the person getting a sobriety test. The story has been corrected. 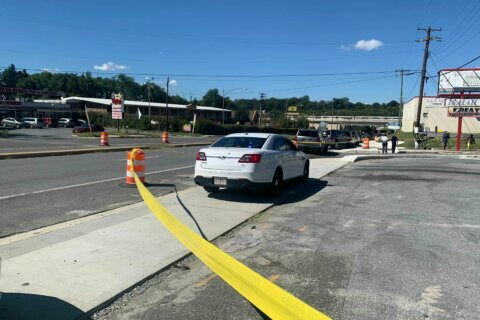