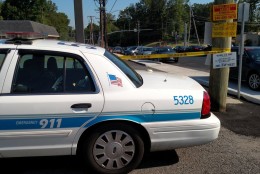 Prince George’s County police arrived around 5 a.m. at a 7-Eleven on the 9700 block of Brandywine Road in Clinton, Maryland, and found 31-year-old Taiwo Oduwole of Upper Marlboro inside with gun shot wounds after an attempted robbery. He was taken to the hospital, where he was pronounced dead.

Prince George’s County police released surveillance photos of the suspect Saturday afternoon, showing a man with a black, gray and red backpack and a gray and black coat.

Police said they believe the same suspect may have robbed a hotel in the 7900 block of Malcolm Road shortly after the shooting.

Dick Uliano contributed to this report.