WASHINGTON (AP) — President Donald Trump said Friday he will skip President-elect Joe Biden’s inauguration, refusing to fulfill the outgoing president’s traditional role in the peaceful transition of power and undercutting his own message just one day earlier on the need for “national healing and unity.”

Trump, who has not appeared in public since a violent mob of his supporters besieged the Capitol on Wednesday and tried to halt the transfer of power, will be the first incumbent president since Andrew Johnson not to attend his successor’s inauguration.

Biden said he was just fine with that, calling it “one of the few things we have ever agreed on.”

“It’s a good thing him not showing up,” he added, calling the president an ”embarrassment” to the nation and unworthy of the office.

Traditionally, the incoming and outgoing presidents ride to the U.S. Capitol together on Inauguration Day for the ceremony, a visible manifestation of the smooth change of leadership.

Biden will become president at noon on Jan. 20 regardless of Trump’s plans. But Trump’s absence represents one final act of defiance of the norms and traditions of Washington that he has flouted for four years.

Historian Douglas Brinkley said that while attending the inauguration “would be a wonderful olive branch to the country,” he wasn’t surprised by the decision.

“Donald Trump doesn’t want to be in Washington as the second-fiddle loser standing on stage with Joe Biden,” he said.

While Trump stays away, former Presidents Barack Obama, George W. Bush and Bill Clinton will be there to stand witness to the rite of democracy. The only other living president, 96-year-old Jimmy Carter, who has spent the pandemic largely at home in Georgia, will not attend but has extended “best wishes” to Biden.

Trump’s tweet that he would boycott the inauguration came as he holed up in the White House with a dwindling coterie of aides and as momentum grew on Capitol Hill to subject him to impeachment for a second time.

“To all of those who have asked, I will not be going to the Inauguration on January 20th,” Trump said in a tweet.

It may have been his last. The company announced Friday evening that it had permanently suspended Trump from its platform, citing the “risk of further incitement of violence.” The sitting president said the company was trying to “silence” him and replied in an official statement that he was “negotiating” with other social media platforms while looking at “the possibilities of building out our own platform.”

Trump’s decision not to attend the inauguration was not a surprise: For more than two months, he has falsely claimed he won reelection and advanced baseless claims of widespread voter fraud, even though his own administration has said the election was fairly run.

“He is, of course, not constitutionally required to attend and I can imagine losing an election is very hard, but I believe he should attend,” Scott said in a statement. The senator called the rite “an important tradition that demonstrates the peaceful transfer of power to our people and to the world.”

Vice President Mike Pence, who defied Trump on Wednesday when he refused to intervene in the congressional process to certify Biden’s win, was expected to attend the inauguration, according to one person close to him and one familiar with inauguration planning. But Pence spokesperson Devin O’Malley said in a statement Friday that the vice president and the second lady “have yet to make a decision regarding their attendance.”

Biden said Pence was “welcome to come,” and he’d be honored to have him.

“I think it’s important,” he said, that “the historical precedents and how and the circumstances” by which administrations transition “be maintained.”

On Thursday, with 12 days left in his term, Trump finally bent to reality when he released a video late in the day that condemned the violence carried out in his name at the Capitol and acknowledged his presidency would soon end.

“A new administration will be inaugurated on Jan. 20,” Trump said in the video, after issuing an earlier written statement that offered the same message. “My focus now turns to ensuring a smooth, orderly and seamless transition of power. This moment calls for healing and reconciliation.”

But by the next morning, Trump was back to his usual division. Rather than offering condolences for the police officer who died from injuries sustained during the riot, Trump commended the “great American Patriots” who had voted for him.

“They will not be disrespected or treated unfairly in any way, shape or form!!!” he tweeted.

White House counsel Pat Cipollone has repeatedly warned Trump that he could be deemed responsible for inciting Wednesday’s violence. Aides said the president’s video was intended, in part, to try to ward off potential legal trouble and to slow the mass exodus of staffers who have announced their early departures in response to the violence.

Wednesday’s violent insurgency erupted after Trump spoke at a “Stop the Steal” rally where he told his supporters the election had been stolen and urged them to fight. Since then, Trump has been increasingly isolated, abandoned by all but a few of his closest enablers.

He has watched the resignations of top aides, including two Cabinet secretaries and a long list of administration officials.

In addition to those who have resigned, senior staff, including longtime aide Hope Hicks, will begin departing as part of the usual “offboarding” process marking the end of an administration, leaving Trump with only a skeleton crew of aides in his final days in office.

Those who remained on the job continued to weigh their own futures and struggled with how best to contain the impulses of a president deemed too dangerous to control his own social media accounts but who remains commander in chief of the world’s greatest military.

There were fears about what a desperate president could do in his final days, including speculation Trump could incite more violence, make rash appointments, issue ill-conceived pardons — including for himself and his family — or even trigger a destabilizing international incident.

On Capitol Hill, Democrats laid plans to impeach Trump a second time, with articles of impeachment expected to be introduced on Monday. A draft of the resolution charges Trump with abuse of power, saying he “willfully made statements that encouraged — and foreseeably resulted in — imminent lawless action at the Capitol.”

White House spokesperson Judd Deere responded by saying, “A politically motivated impeachment against a President with 12 days remaining in his term will only serve to further divide our great country.”

Meanwhile, House Speaker Nancy Pelosi was pursuing other measures to try to check Trump’s powers. She said she had spoken to the chairman of the Joint Chiefs of Staff about preventing an “unhinged” Trump from initiating military actions or a nuclear strike. She and Democratic Senate leader Chuck Schumer have also called on Pence and the Cabinet to invoke the 25th Amendment to force Trump from office — though the urgency of that discussion among Cabinet members and staff had diminished by Thursday.

Staff-level discussions on the matter took place across multiple departments and even in parts of the White House, according to two people briefed on the talks who, like others, spoke on condition of anonymity to discuss internal conversations. But no member of the Cabinet has publicly expressed support for the move.

Pence has not said publicly whether he would support invoking the 25th Amendment, but Democratic Sen. Joe Manchin said he did not think that was likely. “I’m just hearing he is basically not moving in that direction,” he said, citing “my Senate channels.”

Associated Press writers Jonathan Lemire in New York and Alan Fram and Kevin Freking in Washington contributed to this report. 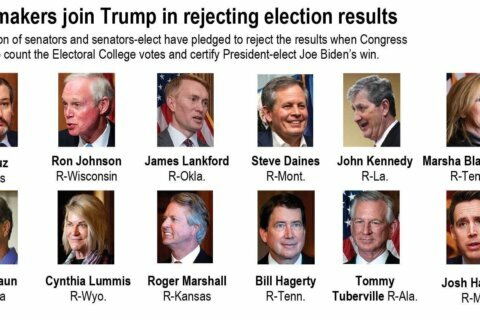