THANKSGIVING NEWS: What to do with leftovers | Takeout options instead in DC | Holiday changes across the US | Thanksgiving dinner for pets?
Home » Presidential Election News » Rudy Giuliani says Trump…

Rudy Giuliani said at a press conference shortly after Joe Biden was projected to become the 46th president of the United States that President Trump will not concede the election. “Obviously he’s not going to concede when at least 600,000 ballots are in question,” Giuliani said in Philadelphia on Saturday.

The president’s personal attorney claimed, without evidence, that ballots were tampered with in Pennsylvania, the state that gave Biden the crucial Electoral College votes necessary to win the White House.

Giuliani was joined at his news conference by three poll watchers who claimed they were prevented from adequately monitoring the ballot counting process. Giuliani said he has statements from 25 watchers, and has spoken to a total of 50 with similar stories. “I could have brought about 50 with me,” Giuliani said, but he said he did not because “50 is too many,” and some were afraid of retribution.

According to Giuliani, the Trump campaign plans to file several federal lawsuits alleging the “uniform deprivation of the right to inspect” ballots. He accused the “Democratic machine in Philadelphia” of tampering with counting, and “(keeping) the votes of dead people secret,” among other baseless accusations.

“Seems to me somebody from the Democratic National Committee sent out a note that said don’t let the Republicans look at those mail-in ballots,” Giuliani claimed, again without offering any evidence.

He claimed that Biden gaining a lead in the state vote count after Election Day is proof of corruption. President Trump initially led in Pennsylvania, but lost that lead after unprecedented numbers of mail-in ballots — which under state law are not allowed to be counted prior to Election Day — pushed Biden ahead.

“You just don’t lose leads like that without corruption,” Giuliani said, though it is actually not unusual for early leads to shift as more votes are tallied.

Asked about the call for President-elect Biden by major news networks, Giuliani mocked the media for harboring “hateful biases” toward President Trump. “Networks don’t get to decide elections, courts do,” he said.

Saturday’s press conference was held at the Four Seasons Total Landscaping in Philadelphia, not the hotel, where many had assumed a press conference would take place. According to The New York Times, it was an intentional move by the Trump team to hold the event at a parking lot in a less upscale location. 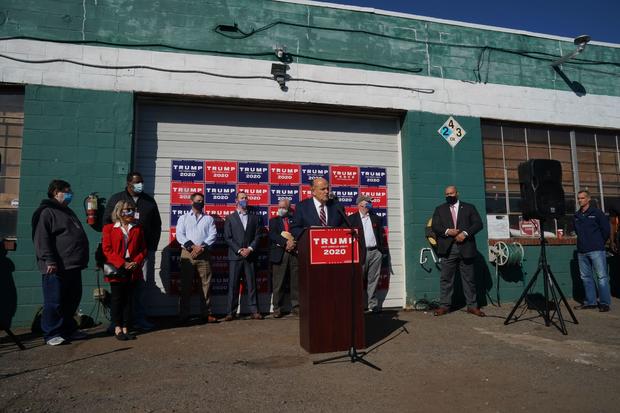 Rudy Giuliani, personal attorney for President Trump, speaks at a news conference in the parking lot of the Four Seasons Total Landscaping company on November 7, 2020 in Philadelphia.

Four Seasons Total Landscaping posted a statement on Facebook on Sunday that it was “honored to be asked to host a press conference at our facility.”

“We thank all of those that have shown support for our business and while we understand the negative comments, it saddens us that we have received such harsh judgement,” the company said. “Our team at Four Seasons would have proudly hosted any presidential candidate’s campaign at our business. We strongly believe in America and in democracy. We hope that our fellow Americans can join together and support all local small businesses during this time.”