Pennsylvania has become the epicenter of the 2020 election chaos that experts warned was coming, with courts changing ballot rules, disputes over poll watchers, new voting machines being put to the test, and disinformation spreading rapidly in the swing state.

It’s all coming to a head with early voting already underway and Election Day about four weeks away. Pennsylvania and its 20 electoral votes are critical to President Donald Trump’s path to reelection, but Democratic nominee Joe Biden has maintained a steady lead in recent polls.

“Pennsylvania is perhaps the most coveted state on the 2020 electoral map,” said Chris Borick, who runs the widely respected polling outfit at Muhlenberg College. “Layer in all the procedural issues — which are significant, ongoing, and complex — and you create this dynamic that is overwhelming in many ways to voters. People are concerned about their votes being counted.”

Some of the challenges were caused by litigious political parties, and by a President who has amplified Pennsylvania-specific disinformation. Other issues were triggered by the coronavirus, or are more routine election-year hiccups. Here’s a breakdown of the situation in Pennsylvania.

Lawsuits brought by Democrats and Republicans in the Keystone State have forced judges to change some of the rules for the election at the last minute — and the legal fights aren’t over.

A series of rulings from the Pennsylvania Supreme Court extended the deadline for when mail ballots can be accepted after Election Day. The state’s high court also tweaked the policy for so-called “naked ballots,” meaning mail ballots that are missing an inner envelope will not get counted.

While these rulings cleared the way for local officials to mail out millions of ballots to voters who requested them, the election procedures still aren’t set in stone. Republicans have asked the Supreme Court to block the ruling, and they’re also seeking relief in a related federal lawsuit.

“The most important thing at this point is the lack of certainty,” said David Becker, founder of the nonpartisan Center for Election Innovation and Research. “It’s not about what the rules are. It’s about when the rules will be settled. Voters need certainty. They need to know how to navigate the process. Pennsylvania is probably the place where things are most unsettled right now.”

The Trump campaign caused disruptions and created an uncomfortable situation for some voters last week by sending unauthorized “poll watchers” to early voting sites in Philadelphia.

They were ultimately turned away by local election officials, who noted that the voting locations are “satellite offices” and not traditional polling places where partisan poll-watchers are allowed. But that didn’t stop Trump from using the incident to undermine confidence about the voting process in the swing state, saying at the first debate that, “bad things happen in Philadelphia.”

Election 2020: Send us your stories about voting issues

“This is about bringing people into Black and Brown communities and try and intimidate them. That’s what the President of the United States and his enablers are trying to do,” Pennsylvania Attorney General Josh Shapiro said on MSNBC last week. “As the chief law enforcement officer of the Commonwealth of Pennsylvania, I sure as hell won’t let him get away with that.”

The Trump campaign has filed a lawsuit challenging the ban on poll watchers at satellite offices. It’s too early to tell if the lawsuit will go anywhere, but it’s clear that Team Trump is girding for a fight. They’ve used militant language in digital ads to encourage “able-bodied” Trump supporters to join an “army” of poll-watchers. And now, state and local officials are scrambling to respond.

Trump and his campaign have blitzed Pennsylvania with disinformation, spreading dubious information about mail-in voting across many platforms, from social media to the debate stage.

They capitalized on a minor mishap near Wilkes-Barre to falsely accuse Democrats of “stealing” the election. (A low-level election worker mistakenly threw out nine ballots, including some votes for Trump.) They also promoted viral claims of “corruption” after the Philadelphia incident where officials kicked out unauthorized pro-Trump poll watchers who descended on early voting sites.

“Trump’s standing in the polls is not in a great place,” said Borick, the Muhlenberg College pollster. “So, his paths to victory might involve efforts to depress turnout and to question the validity of results, if it comes to that. The President and his campaign have engaged in that.”

Experts believe the disinformation crisis is going to get worse. There could be false claims of shuttered polling places on Election Day or doctored images of results. The FBI has already warned the public about the growing threat of post-election disinformation from foreign powers.

Pennsylvania is also dealing with the regular challenges that come with running an election in a presidential year. In Philadelphia, a couple of technical issues led to long lines and frustrated voters, as the largest county in the state recently kicked off its first wave of in-person voting.

The statewide voter registration database, which is run by the Secretary of the Commonwealth, went down on Tuesday for a little more than an hour. The problem meant election workers were unable to look up voters and were unable to process and accept mail-in ballot applications.

CNN reached out to Secretary of the Commonwealth Kathy Boockvar’s office for comment.

Also, because of new election laws passed in 2019, this is the first year that any Pennsylvania voter can vote by mail. This is also the first presidential election where the state will use new voting systems that provide a paper trail and the opportunity for robust post-election audits.

There are always growing pains with changes like these. Officials have been working quickly to identify issues and fix them, but Daniel Mallinson, professor of public policy and administration at Penn State Harrisburg, says even small problems can lead to deeper concerns of legitimacy.

“That’s probably my bigger concern, the legitimacy being undermined by these smaller things where there is a process for sorting them out,” Mallinson told CNN.

While Pennsylvania has already seen some early hiccups, the post-election process could be even more chaotic. State Republicans started taking steps that could potentially disrupt the vote-counting process or even lead to attempts to overturn the results of the popular vote.

Pennsylvania, like some states, requires that presidential electors be chosen based on the popular vote. However, one state party official recently suggested that if the voting results took too long to be tabulated, the state legislature could determine who won the election instead.

Republicans in the Pennsylvania House of Representatives are also in the process of creating an investigative commission with subpoena powers. The committee, if approved, would be able to investigate, review and make recommendations about the 2020 general election including subpoenas for election workers and postal service employees mid-counting and election work.

Top Democrats in the state said the maneuver was a “power grab,” and Gov. Tom Wolf denounced the effort as a Republican attempt interfere with and disrupt the election’s integrity.

“What is most important are the fundamentals of every free and fair election all over the world: every eligible voter must be allowed to vote, their vote must count, and that count should determine the winner,” Wolf said in a statement emailed to CNN on Friday. 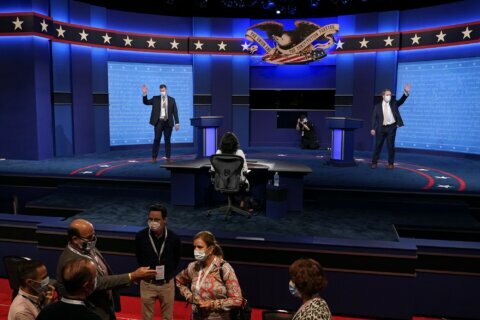