With Big Ten reversal, Trump aims to score in battlegrounds

President Donald Trump was quick to spike the ball in celebration when the Big Ten announced the return of fall football at colleges clustered in some of the Midwest battleground states.
Listen now to WTOP News WTOP.com | Alexa | Google Home | WTOP App | 103.5 FM

WASHINGTON (AP) — President Donald Trump was quick to spike the ball in celebration when the Big Ten announced the return of fall football at colleges clustered in some of the Midwest battleground states critical to his reelection effort, declaring, “I’m the one who got football back.”

But his efforts to reverse last month’s decision to postpone fall sports in the conference because of the novel coronavirus were far from the only factor that led officials to change course.

The Big Ten — one of the power conferences that drives the big business of college sports — was under enormous pressure to restart the season from athletes, parents, coaches and college towns that rely on football Saturdays to fill restaurants and hotels and provide much-needed tax revenue.

For weeks, Trump allied himself with the effort. He publicly and privately prodded the conference to reverse its Aug. 11 decision to play football next spring. When the conference announced Wednesday it would begin play Oct. 23 under strict coronavirus prevention protocols, Trump was eager to capitalize politically.

“I called the commissioner a couple of weeks ago and we started really putting a lot of pressure on, frankly,” Trump said at a news conference.

Trump’s advisers said the episode underscores how the president’s unconventional style — his Twitter rebukes and rhetorical bluster — gets things done.

It is a moment that could help Trump on the margins in key states such as Pennsylvania, Iowa, Michigan, Minnesota, Ohio and Wisconsin where schools are now scheduled to play their first games less than two weeks before Election Day, said Alex Conant, a Republican strategist.

“There are voters who voted for him in 2016 who don’t want to vote for him this time — mostly because they don’t like him personally,” Conant said. “Those voters need to be reminded why they supported him in the first place. It’s issues like this where he takes a controversial position they agree with and delivers.”

The Big Ten reversal also syncs with Trump’s efforts to suggest the nation is on the glidepath to normalcy under his stewardship. The president had criticized Democrats who “don’t want football back for political reasons” and accused Michigan’s Democratic Gov. Gretchen Whitmer of keeping Michigan and Michigan State off the field.

Left unsaid is that the 14 schools in the Big Ten all have opted to scale back in-person learning and pleaded with students to stop parties and congregating in large groups as the U.S. death toll from the virus nears 200,000.

And while Trump repeatedly decried the Big Ten, until Wednesday he had far less to say about the postponement of fall sports by the Pac-12, which includes universities in Democratic-leaning California, Colorado, Oregon and Washington as well as battleground Arizona. On Wednesday, Trump called on the Pac-12 to “get going” and resume play.

Whitmer said the Big Ten decision to reverse course was made by members of the conference. She said she had spoken with other governors about the prospect of allowing spectators to attend games but cautioned that COVID-19 “is still a very real threat.”

“If we want to preserve that as an option, we’ve got to be serious about masking up,” she said.

Big Ten officials cited improvement in same-day coronavirus testing capabilities as a key factor in their reversal. Asked about Trump’s role in bringing about the about-face, Wisconsin coach Barry Alvarez said Trump made clear “the Big Ten was important to him.”’

“I think he drew attention to Big Ten football and had a solution,” Alvarez said. “So how much that had to do with us being back on the field, I don’t know that answer.”

“College football is an enormous part of fall Saturdays for millions of Americans, and it is coming back, thanks in no small part to the leadership of President Trump,” Stepien said. “We know that Joe Biden would not have pushed for this, since he has looked for every reason to keep our country closed for as long as possible, because he believes it would help him politically.”

After calling Big Ten Commissioner Kevin Warren on Sept. 1, Trump expressed confidence that players would be back on the field soon, tweeting that a return to play was “On the one-yard line.” He later suggested Whitmer, as well as Republican Gov. Larry Hogan of Maryland and Democratic Gov. J.B. Pritzker of Illinois, were holding things up.

Biden, for his part, tried to lay the blame for canceled sports events squarely at Trump’s feet with an ad that aired days before Trump’s call to the Big Ten commissioner.

“Trump put America on the sidelines. Let’s get back in the game,” flashes on the screen with images of empty stadiums at the University of Michigan, Michigan State University and elsewhere. Trump on Wednesday slammed the ad as “totally fake.”

Karen Kedrowski, a political scientist at Iowa State University, said the return of the Big Ten is good politics for Trump, if the conference is able to carry out the season with minimal further disruptions and if relatively few athletes get sick with the virus.

“It is the sort of thing that will excite Trump’s base to donate or harangue their friends to go out and vote for Trump or remind them to send in their absentee ballots,” she said. “In some of these states where the races are expected to be very tight, you might not have to move the needle much to help make a difference.” 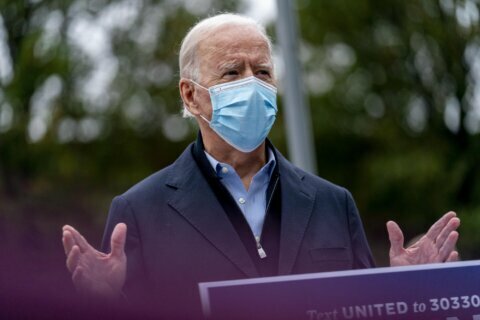 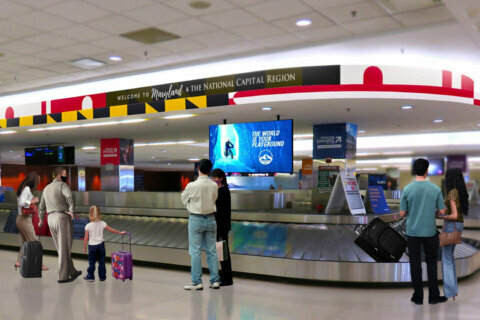