PITTSBURGH (AP) — Joe Biden opened the first week of the general-election campaign with a morning flight to a must-win battleground state where he delivered a blistering speech against his rival, President Donald Trump. He dropped off pizzas at a local firehouse, took photos with first-responders and swung by a private fundraiser headlined by Cher before catching a return flight home.

But Biden’s Monday trip to Pittsburgh, his first substantial travel in months, was anything but normal. Local rules designed to prevent the spread of the coronavirus meant that voters in this swath of western Pennsylvania who could decide the election couldn’t watch Biden deliver his speech in-person. Some Biden staffers had to leave to prevent overcrowding in the room. And the fundraiser was held virtually, with Biden joining from the same building as the speech.

Cher, appearing virtually, said of Trump, “The guy is really an idiot.”

With both parties’ conventions over and the campaign entering the home stretch, the Pennsylvania swing offered a preview of how Biden will likely spend his days before the election: day trips to critical states where he participates in carefully controlled events and does little of the glad-handing that he is known for. Biden’s campaign insists it is listening to science by keeping him away from crowds and wearing a mask in public, in contrast with Trump, who packed people onto the White House’s South Lawn last week for his speech accepting the Republican Party’s nomination for a second term.

Biden is betting that his more reserved approach will appeal to voters seeking to move past the tumult of the Trump era. But he’s competing against a president who eagerly harnesses the power of incumbency to advance his political prospects.

Trump routinely flies around the country on official business that often feels like campaign events with large crowds — usually gleefully flaunting social distancing and mask-wearing rules — gathering at the airport to cheer him. The president will travel to Kenosha, Wisconsin, on Tuesday after some protests there became violent in recent days following the police shooting of Jacob Blake, a Black man, by a white police officer.

Trump told reporters on Monday that the trip could “increase enthusiasm” in the state, which is another battleground.

The president is fond of accusing Biden of “hiding” in the basement of his Delaware home, where he’s built a studio to conduct virtual campaign events. It’s not a fully accurate description because Biden has traveled about once a week since Memorial Day, delivering speeches and interacting with small groups of business owners and others.

But until Monday, those trips were to places in Delaware and eastern Pennsylvania that were a short drive from his home.

When Biden landed in Pittsburgh, only a group of campaign reporters — consigned to their own small plane that flew ahead of Biden’s — was there to greet him. He didn’t answer any questions.

Biden first went to a onetime shuttered factory that has been converted into a sustainable energy center and is now part of Carnegie Mellon University. He lashed out at Trump, speaking in a large, concrete-floored room with ceilings that soared more than three stories.

Yet masked reporters were assigned to individual social distancing circles set on the floor and, because of their ranks and those of the Secret Service, some of Biden’s staff members slipped out before his speech — ensuring that not more than 25 people were present.

“Donald Trump looks at this violence and sees a political lifeline,” said Biden, blaming the president for fanning tensions that have seen some protests against institutional racism and police brutality turn violent recently.

In a nod to Pennsylvania’s heavily energy dependent economy, Biden declared: “I’m not for banning fracking — no matter how many times Donald Trump lies about me.”

In the parking lot outside, well-wishers swelled to more than 100, even after Biden’s speech concluded. Some waved Biden signs and chanted “We want Joe!” despite not being close enough for him to hear them.

Biden later made a quick stop at the firehouse, joking of the pizzas he brought, “I was worried my staff was going to keep them.”

He chatted with first-responders and posed for a group picture. But Biden also was interrupted by a man who said he was a retired fire fighter and used a perch atop a truck parked across the street and a bullhorn to pester the Democratic candidate.

“You finally got out of your basement,” the man declared. “You’re not going to win Pennsylvania.”

Biden, who was wearing a black face mask, pulled it down as he turned and yelled in a deadpan, “Don’t jump!”

Moments later, Biden was flying back to Delaware, where, again, only the same small group of reporters was there to greet him.

Biden left the plane wordlessly. He’s considering a trip to Wisconsin soon and will hit a series of other battleground states — but not likely until after Labor Day. 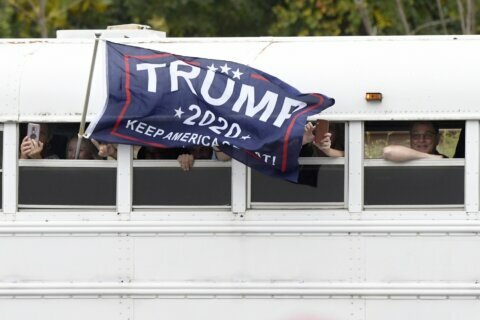