In an appearance at the Democratic National Convention on Wednesday, former Congresswoman Gabby Giffords highlighted her long road to recovery since being shot in the head in 2011.
Listen now to WTOP News WTOP.com | Alexa | Google Home | WTOP App | 103.5 FM

In an appearance at the Democratic National Convention on Wednesday, former Congresswoman Gabby Giffords highlighted her long road to recovery since being shot in the head in 2011. Democrats pushed ending gun violence as one of their pledges on Wednesday, featuring not just Giffords but prerecorded remarks from Emma Gonzales of March for Our Lives and DeAndra Dycus of Moms Demand Action.

In addition to speaking about her recovery, Giffords addressed how she had to practice words carefully as well her difficulty walking.

“I’ve known the darkest of days,” Giffords said in the prerecorded video. “Days of pain and uncertain recovery. But confronted by despair, I’ve summoned hope. Confronted by paralysis and aphasia, I responded with grit and determination. I put one foot in front of the other. I’ve found one word and then I’ve found another.”

Giffords called her recovery a “daily fight” and said she still struggles to speak. “But I have not lost my voice,” Giffords said. “America needs all of us to speak out even when you have to fight to find the words.” 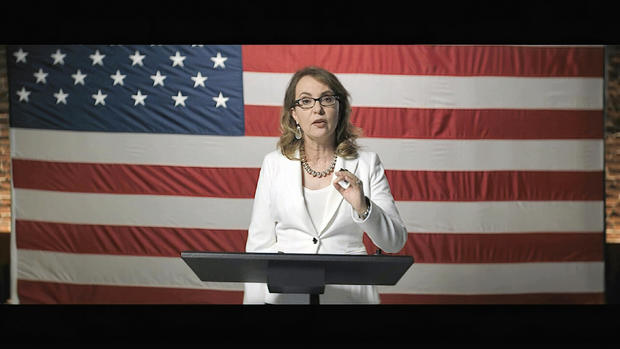 Giffords, whose husband, former astronaut Mark Kelly, is running for Senate in Arizona, said “we are at a crossroads” in the fight for gun control. “We can be on the right side of history,” Giffords said. “We must elect Joe Biden. He was there for me; he’ll be there for you, too.”

Joe Biden, who takes pride in taking on the National Rifle Association while he was in the Senate, has a gun policy platform that includes banning assault weapons and universal background checks.

Democratic vice presidential nominee Kamala Harris, a former prosecutor, is a staunch advocate of stricter gun control laws, as well. When she was a presidential candidate, she vowed to take executive action on guns if elected and Congress failed to act within 100 days.

Giffords nearly died when a gunman opened fire at a Tucson political event in 2011. Six people were killed and she was one of 13 who were wounded. Kelly told the CBS Evening News in 2012 that a trauma surgeon said she could be in a coma “forever.”

She received a standing ovation when she returned to Congress for President Obama’s 2012 State of the Union.

Kathryn Watson contributed to this report.