Ex-felons are facing new hurdles when registering to vote

Christine Vincent was hopeful in November 2018 when she thought she could vote again. Florida had just passed a historic amendment giving former felons the right back after the completion of their sentence, and she felt like she could be a “normal” member of society again.

But there’s a catch: a controversial law signed by Florida Governor Ron DeSantis — and recently upheld by the Supreme Court — requires ex-felons to pay off all court fees and fines before they can cast a ballot.

Many people, including Vincent, don’t know how much they owe because of Florida’s “arcane” record-keeping system. Vincent, a 35-year-old mother of three from Broward County, had served two years for grand theft and thought she had paid off $8,000 in fees. But a voting rights group, the Florida Rights Restoration Coalition, called her last month to say she still owes money – and she is still working to find out how much.

“My right to vote means a lot because I’m given this chance to not be looked at as a criminal,” Vincent told CBS News. “It gave me hope, a little bit there, but now I feel like I’m starting the process all over again.”

Jonathan Diaz, a voting rights attorney with the Campaign Legal Center, said the process to determine what people owe can be “impossible” to figure out, especially without a legal background. The problem is made worse, he said, by a lack of digitization, poor record-keeping, and the fact that information is kept county-by-county, instead of in one centralized, state database.

Angel Sanchez, 38, chipped away at $1,698 in court-ordered fees after spending 12 years in prison for a gang-related sentence. He first used what he made from a part-time job at a burger restaurant to make the payments, and has since graduated from the Miami School of Law.

However, Sanchez recently discovered public records showed outstanding balances for court fees, nearly six years after a probation officer confirmed he had paid off all his debt.

Sanchez, who lives in Miami-Dade, said he was able to work with the state to correct the errors and this November would be the first time he votes for a presidential candidate.

Even so, Sanchez worries the issue will keep other ex-felons from voting. “I’m now a productive and positive member of my society, the last thing I need is to have to explain why I got some charge about fraudulent voting,” he said. 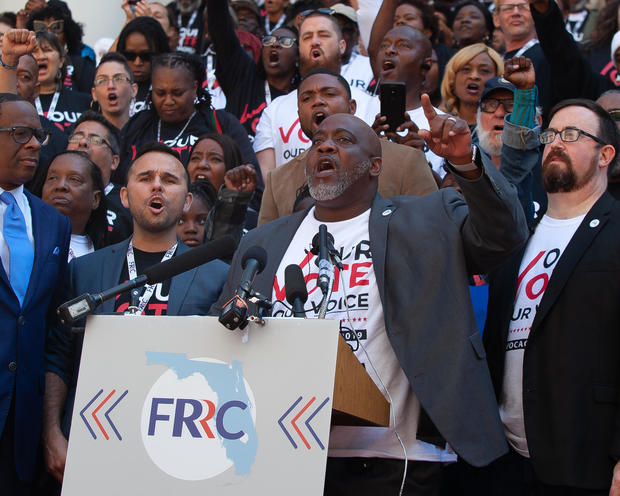 The Florida Department of State told CBS News individuals unsure about their eligibility status can request an advisory opinion through the state’s Division of Elections. A district court has outlined a timeline to ensure the inquiries are completed swiftly and officials have asserted the procedure satisfies due process obligations.

The process puts the burden on applicants to provide records and documentation of payments for the state to review – a significant barrier, according to voting rights advocates.

Desmond Meade, the founder and executive director of the Florida Rights Restoration Coalition, is working to help former felons achieve voter eligibility. The 53-year-old served time in prison for a gun charge, and several months ago, realized he had outstanding fees.

“Here I am, a person with a law degree who has been advocating in this area for quite a number of years, and even myself had difficulty getting an exact number of what was owed,” he said. 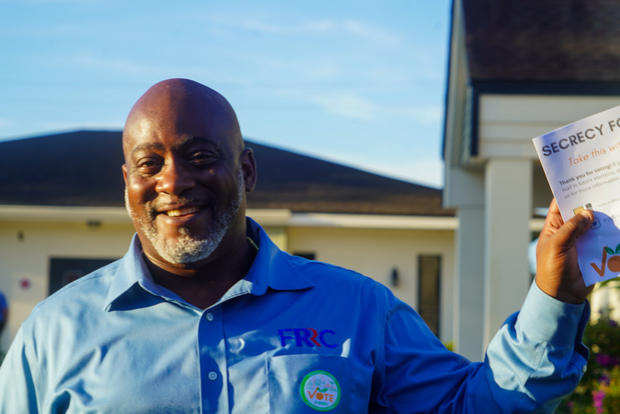 Meade said he quickly settled the balance and continues to help others do the same. Michael Jordan recently donated $500,000 to the organization, which Meade said contributed to the nearly $4 million they’ve raised to help pay off the fines and fees of Floridians. So far, at least 1,700 people have been helped out of debt — and secured their right to vote.

Meade plans to vote in the presidential election for the first time in more than 30 years this fall. “Nothing speaks more to citizenship than being able to cast a ballot,” he added. “In spite of your ethnicity, in spite of your economic status, when you walk into that voting booth you have just as much power as the richest person in the world.”