Joe Biden said Tuesday that wearing a mask in public to combat the spread of the coronavirus is a sign of leadership and called President Donald Trump a “fool” who was “stoking deaths” for suggesting otherwise.
Listen now to WTOP News WTOP.com | Alexa | Google Home | WTOP App | 103.5 FM

WASHINGTON (AP) — Joe Biden said Tuesday that wearing a mask in public to combat the spread of the coronavirus is a sign of leadership and called President Donald Trump a “fool” who was “stoking deaths” for suggesting otherwise.

The presumptive Democratic presidential nominee’s comments came a day after he wore a black face mask while making his first public appearance in more than two months. Biden has remained at his Delaware home amid a pandemic that has frozen the presidential campaign, but he marked Memorial Day by laying a wreath at a nearby veterans’ memorial with his wife, Jill.

Trump later retweeted a post that appeared to make fun of a photo of Biden in his mask, though he later said he didn’t mean to be critical. In an interview with CNN, Biden responded, “He’s a fool, an absolute fool, to talk that way.”

“He’s supposed to lead by example,” Biden said. The former vice president also noted that nearly 100,000 Americans have been killed by the virus and suggested that as many as half of those deaths were avoidable but for Trump’s “lack of attention and ego.”

Federal officials have recommended that people cover their nose and mouth in public when other measures, such as practicing social distancing of at least 6 feet (1.8 meters), aren’t possible. But the issue has become increasingly politically charged, with Trump refusing to wear a mask and polls finding that conservative Americans are more likely to forgo them as well.

Biden didn’t wear a mask during the CNN interview, which was conducted outside his house, but he sat 12 feet (3.6 meters) from the reporter.

Biden added that the president is politicizing the issue and “it’s stoking deaths. That’s not going to increase the likelihood that people are going to be better off.”

After Biden wore the mask on Memorial Day, Trump retweeted a post by a political commentator that featured an image of a masked Biden over the comment, “This might help explain why Trump doesn’t like to wear a mask in public.” Asked about that during a subsequent event in the White House Rose Garden, the president responded, “Biden can wear a mask.”

“But he was standing outside with his wife, perfect conditions, perfect weather,” Trump said. “They’re inside, they don’t wear masks and so I thought it was very unusual that he had one on. But I thought that was fine. I wasn’t criticizing him at all. Why would I ever do a thing like that?”

Trump then asked the reporter who was following up with a second question to remove the mask he was wearing, complaining he couldn’t hear him. When the reporter instead said he would speak louder, the president replied: “Oh, OK, ’cause you want to be politically correct.”

Federal guidance does not recommend that people wear masks when at home. Still, White House press secretary Kayleigh McEnany used the same line of argument on Tuesday. She noted that Biden has foregone a mask while appearing for frequent online events from his home, something he did during a virtual fundraiser held Tuesday night.

“It is a bit peculiar,” McEnany said. “That in his basement, right next to his wife, he’s not wearing a mask. But he’s wearing one outdoors when he’s socially distant. So I think that there was a discrepancy there.”

For his part, Biden changed his Twitter profile picture to one of him in the black face covering, and he tweeted Tuesday night: “Wear a mask.”

Meanwhile, the former vice president has continued to face fallout from a remark he made Friday on “The Breakfast Club,” a radio program influential and popular in the black community. He had commented, “If you’ve got a problem figuring out whether you’re for me or for Trump, then you ain’t black.”

That sparked criticism from some African American activists, and Biden made a previously unscheduled appearance on a U.S. Black Chamber of Commerce conference call hours later to say that he “should not have been so cavalier.”

He went further Tuesday, telling CNN, “I shouldn’t have done that. It was a mistake.”

“When I say something that is understandably, in retrospect, offensive to someone, and legitimately offensive — making it look like taking them for granted — I should apologize,” Biden said. “I don’t apologize for every mistake I make because a lot of them don’t have any consequences.” 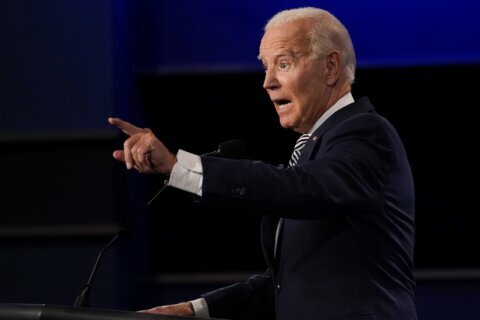