BLUFFTON, S.C. (AP) — All is not well in the Democratic Party’s quest for a presidential nominee.

The New York billionaire, whose career in business and politics has been guided by data and analysis above all, is stepping toward a Democratic run of his own less than 90 days before the first votes are cast. More than anything, his decision reflects two prime factors: the glaring weakness of establishment-favorite Joe Biden and persistent fears that his surging rival, Elizabeth Warren, is too liberal to defeat President Donald Trump in a general election.

It’s far from clear that Bloomberg, a former Republican with no broad political base, can compete with Biden or Warren should he decide to run. Yet his step in that direction represents a powerful indictment of his new party’s presidential field.

“This is a team that is very smart and methodical,” said New York-based Democratic pollster Jef Pollock. “It reflects a feeling that the field cannot beat Donald Trump, and therefore, they feel like they have to try.”

Just seven months ago, Bloomberg announced he would not enter the Democratic primary after a brief exploration phase. His advisers, at the time, privately shared their analysis that there wasn’t room for another centrist like Bloomberg with Biden in the race.

What a difference seven months makes.

The former vice president showed vulnerability in his campaign’s earliest days with a series of flubs and uneven performances that bothered his establishment allies. Still, Biden led in virtually every poll for much of the year because of the persistent belief that he was the most electable Democrat in a head-to-head matchup against Trump.

A turning point came last month when Biden released a weak third-quarter fundraising report that undermined a supposed strength, raising serious questions about the extent of his support from the party’s power brokers. And in recent weeks, a series of underwhelming polls in Iowa and New Hampshire suggested that Biden is falling behind in the states that typically matter most in primary politics.

He is clearly trending in the wrong direction. And the universe of concerned Democrats is expanding.

They include establishment allies such as former Virginia Gov. Terry McAuliffe, who encouraged Biden last month to fire consultants and stop flying on private planes. They include rank-and-file voters like Bobbi Helton, a retiree from Hilton Head, S.C., who said this week that she’s still shopping for a candidate in the moderate lane.

“I’ve always thought Biden was wonderful,” she said at an event for another candidate this week. “But watching the debates he’s a step behind in his thinking. If he’s going to debate Trump, Trump is going to wipe him out.”

And the ranks of the concerned now officially include the 77-year-old Bloomberg, a perennial almost-candidate who is one of the world’s richest men. He is moving to qualify for the presidential primary ballot in Alabama, the state with the earliest filing deadline.

It does not ensure he will formally launch a campaign, but it certainly keeps the door open.

Lest there be any doubt about what’s fueling his decision, chief political aide Howard Wolfson explained Bloomberg’s thinking late Thursday as the political world grappled with the significance of his boss’ stunning decision to step toward a run.

“We now need to finish the job and ensure that Trump is defeated,” Wolfson said, “but Mike is increasingly concerned that the current field of candidates is not well positioned to do that.”

Of course, Biden’s underwhelming candidacy is only one piece. The other top-tier candidates have glaring weaknesses that have deepened Democrats’ sense of anxiety as well.

Bernie Sanders is a 78-year-old self-described democratic socialist recovering from a heart attack. Pete Buttigieg is 37-year-old mayor whose chief accomplishment is leading a city that can fit into college football stadium. And Warren, who has surged past Biden in Iowa and New Hampshire, wants to eliminate private health insurance in favor of a government-backed plan she’s struggling to explain how she’d pay for.

Bloomberg’s team is concerned about Warren’s rise, in particular.

She is the anti-Bloomberg in many ways. The Massachusetts senator has built her 2020 campaign around a series of bold, progressive ideas that would transform the nation’s political and economic systems, but have little realistic chance of becoming law in a divided Congress.

Warren rails against the billionaire class, to which Bloomberg belongs, and she refuses to accept political donations from big donors like him. Her fiery brand of liberal politics is largely in line with the base of the modern-day Democratic Party, which is clamoring for dramatic change in the age of Trump.

Yet Bloomberg fears she cannot win a general election.

That’s not to say there aren’t other more centrist options already in the race. The current field — some 16 people strong — includes alternatives like Amy Klobuchar a Midwestern moderate, Michael Bennet, a mild-mannered senator and Steve Bullock, a red-state governor who knows how to talk to Trump voters.

But add up the averages of their support and you get to less five percent. Only one of them, Klobuchar, has qualified for next month’s debate. And nine months into her candidacy, she’s showing no signs of breaking out of the low single digits.

Their poor performance suggests Bloomberg, who might also struggle to qualify for debates, would need a dramatically different strategy, one that relies on national advertising and building support outside the traditional early states.

Bloomberg is far from an ideological warrior, a pragmatic former New York City mayor who formally joined the Democratic Party only in October of 2018. Earlier this year as he first explored a 2020 run, he charged that none of his more liberal critics have made as much progress on the top issues of the day: climate change, gun violence and immigration.

On all three, Bloomberg has created sprawling nation-wide organizations backed by his vast fortune that have helped enact a series of progressive shifts in cities and states across the country. Such issues have particular resonance in the nation’s suburbs, Republican-leaning areas that have shifted away from Trump’s Republican Party since his election.

But pragmatism and accomplishment, those were supposed to be Biden’s chief selling points. For Biden, the buyers are becoming harder to find.

“The ones in the front of the pack now don’t really motivate me, so let’s see what Bloomberg’s got,” he said. “We’ve already discounted one billionaire and he’s in White House.”

Peoples has been covering national politics for The Associated Press since 2011. 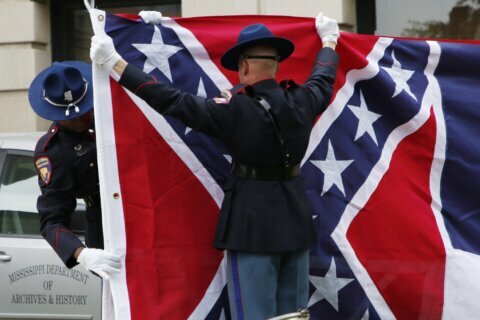