SEATTLE (AP) — Now that a bit of time has passed, Sue Bird knows she made the right decision announcing publicly what she knew inside — that this would be her last season.

But the emotions that are likely to come when she plays what could be her final game in Seattle? Bird has no idea what that’ll be like.

“I’m looking forward to it. That’s for sure,” she said. “I know it’s going to be a really special day. Am I ready for it? I guess we’ll see. It’s gonna be a lot, in all the good ways.”

Bird will play the final regular-season home game of her career on Sunday when the Seattle Storm host the Las Vegas Aces. The Storm have clinched a playoff spot, but with the WNBA’s new playoff format, there’s no guarantee the Storm will end up with a home game in the first round.

Seattle is currently the No. 4 seed ahead of Washington with a week left in the regular season.

So in case the Storm don’t end up seeing their home floor again in the playoffs, Sunday is the day Bird gets feted for her remarkable career. Members of Seattle’s previous championships teams are expected to be in attendance. There will be a pregame ceremony. And the largest crowd in Storm history — more than 18,000 at Climate Pledge Arena — is expected.

“What she’s been able to do in her career, on and off the court, has been phenomenal and I don’t think they’ll ever be anyone like her,” former Seattle teammate Lauren Jackson said this week. “I think the legacy that she’s left on the sport, and that she’ll be leaving on the sport, is enormous. But I’m really excited to see what she does next.”

The 41-year-old Bird, the oldest player in the WNBA, announced in June that this would be her final season before retiring. The decision was expected, especially after Bird flirted with the idea of stepping away after last season before returning for a 19th season on the court and 21st overall with Seattle, missing two seasons due to injuries.

She’ll conclude her career as one of the most decorated players of all-time: four WNBA titles, five Olympic gold medals, countless WNBA records that may never be matched and recognition as one of the great women’s players during a golden generation for the league.

“If you want to talk the best generation (the league) is still pretty young, so we can revisit that conversation in like 20, 30, 40, 50 years,” Bird said. “But as it stands right now, I do feel really lucky that I played in the generation I played in, and I do think a huge chunk there is probably going to go down as the best, most talented.”

Last year when Seattle’s season ended at home with a playoff loss to Phoenix and Storm fans chanted “one more year!” the passionate plea resonated with Bird. She’s cited that moment numerous times over the past year as a partial reason for her decision to return.

But in a sign of how at peace Bird is with her decision, she said when hearing the chant now, her primary thought is, “nice try. See you later,” she joked.

Another sign that Bird knows she made the right decision came after she pressed the button to announce her decision. Instantly, the question of whether she’d play again was gone and with it an unknown weight that hung over her.

That’s led to more open and honest conversations with competitors, former teammates and fans without dancing around the uncomfortable unknown as the final days of her career have ticked closer.

“There were these other nice byproducts I didn’t expect. Most of it comes in the form of people being able to share moments with me, or memories with me. Probably the most meaningful is your peers,” Bird said. “Players on the other team sharing things with me, whether it’s an actual moment or how I’ve inspired them, how they looked up to me, ‘how the WNBA won’t be the same without you.’ I didn’t do it to get that. But that has been really nice. And it really does help. It’s part of my own closure and it’ll help me move on when it’s all said and done.” 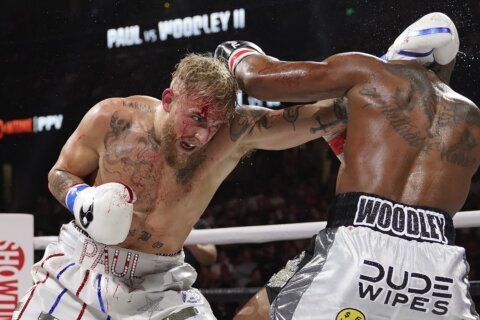 Jake Paul match at MSG off over Rahman’s weight issues