Semenya says she offered to show track officials her body

Double Olympic champion Caster Semenya said she offered to show her vagina to athletics officials when she was just 18 years old to prove she was a female. In an interview with HBO Real Sports, she also accused track and field’s world governing body of making her take medication if she wanted to compete that “tortured” her and left her fearing she was going to have a heart attack.

HBO Real Sports broadcast parts of its interview with the South African runner in a promotional clip on Monday. The full interview is due to air in the United States on Tuesday.

In the interview, Semenya reflected on the 2009 world championships in Berlin, where she won the 800-meter title in dominant fashion as an 18-year-old newcomer at her first major international meet. But her performance and muscular physique led the sport’s governing body to insist the teenager undergo sex tests, causing a firestorm of controversy.

Semenya said track officials from the governing body “probably” thought she had a penis.

Following her world title win, Semenya was forced by the international athletics federation to take medication that artificially lowered her naturally high testosterone if she wanted to compete against other female runners. Although the world track body has never released details of Semenya’s specific medication, it’s believed she took birth control pills or something with similar properties to lower her testosterone.

“It made me sick, made me gain weight, panic attacks. I didn’t know if I was ever going to have a heart attack,” Semenya said of the medication. “It’s like stabbing yourself with a knife every day. But I had no choice.

Forcing athletes to take medication to alter natural hormone levels in order to compete in sports has been criticized by medical experts as being unethical. While the medication Semenya was given wasn’t named, it’s also not clear what dosage she had to take to lower her testosterone to a level deemed to be acceptable to allow her to run.

World Athletics lawyer Jonathan Taylor also spoke to HBO Real Sports and defended the medication by saying leading experts said they would prescribe it for female athletes with high testosterone.

Semenya also responded to that.

“Jonathan must cut his tongue and throw it away,” Semenya said. “If he wants to understand how that thing has tortured me, he must go and take those medications. He will understand.”

The 2009 world championships was the start of Semenya’s ongoing 13-year battle against track authorities to be able to compete against female athletes. Now 31, Semenya is banned from competing in distances from 400-meters to the mile at top-level track meets in updated testosterone regulations unless she agrees to again take medication to lower her testosterone. She has refused, and hasn’t run an 800-meter race at a major meet since 2019. The regulations prevented Semenya from defending her Olympic title last year in Tokyo.

Semenya has one of a number of conditions referred to as differences of sex development, or DSDs. It results in a testosterone level that is higher than the typical female range and which World Athletics says gives her an unfair advantage against other female athletes.

She has challenged the testosterone regulations twice in court, losing appeals at the Court of Arbitration for Sport and the Swiss Federal Tribunal. She has launched a third appeal and is waiting for a hearing date to be set at the European Court of Human Rights.

Semenya has rarely spoken in detail about her experiences with the sport’s international governing body, which was previously known as the IAAF and rebranded to World Athletics. However, details of the sometimes bitter battle came to light in 2019 when court documents from Semenya’s first legal challenge revealed the track body categorized her as “biologically male.” Semenya said she was outraged at a sports body “telling me that I am not a woman.” 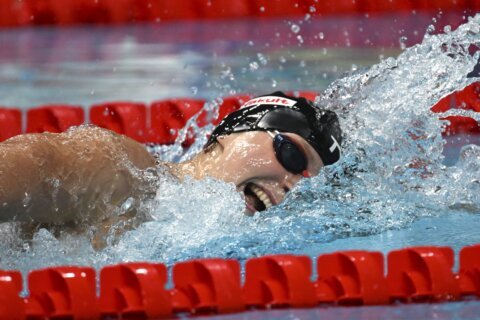