This definitely wasn’t the start that the Minnesota Lynx envisioned to their season — the final of Sylvia Fowles’ career.

For the second consecutive year the Lynx have lost their first four games. They hope they can turn things around the way they did last season when Cheryl Reeve’s team finished 22-10 and earned the No. 3 seed in the playoffs.

“We’ll do what we have to do to get where we want to go, because there’s only one path,” Reeve recently said. “And that path is to be able to be difficult to play against from a physical standpoint and mental standpoint, your defense, your connection on offense.”

Minnesota finally got its first win on Tuesday night, beating Los Angeles 87-84 on a three-point play by Kayla McBride with two seconds left. She finished with 24 points to lead the Lynx in her first game of the season after finishing playing overseas.

While McBride is back, the Lynx are still shorthanded. Napheesa Collier is out indefinitely as she is set to give birth later this month. Damiris Dantas is a few weeks away from returning to the Lynx after a Lisfranc injury she suffered last year.

“Unfortunately, you don’t want to be coaching effort and toughness,” Reeve said. “Those are things that you want your players to bring every time they play and I haven’t held them accountable enough prior to (Thursday), and so now we’re in a space where we’re holding people accountable.

“If we keep asking you to do it over and over again, we’ll start to make the assumption that you can’t do it, and that leads to a different decision, either not playing or not being on the team.”

1. Las Vegas (3-1): Dearica Hamby and Kelsey Plum have moved into the starting lineup this season and it’s paid dividends already for the Aces. Plum is averaging 17.5 points and Hamby is putting up a double-double to start the season with 14.8 points and 11.8 rebounds.

2. Washington (3-1): After missing last year with a foot injury, Alysha Clark returned to the lineup last week. The Mystics suffered their lone loss of the season in that game. They hope to get Natasha Cloud back from health and safety protocols this week.

3. Chicago (2-1): The Sky won both their games last week, although the two teams they beat (New York and Minnesota) are a combined 1-7 entering Tuesday’s games. Chicago will face tougher competition this week on the road playing in Seattle and Washington.

4. Connecticut (1-1): The Sun have a busy week with a game in New York and then a home-and-home matchup with Indiana. Connecticut will welcome back Courtney Williams, who missed the first two games while serving a suspension from an off-court altercation last season.

5. Phoenix (2-1): A pair of games against the Aces this week will provide a better idea where the Mercury are at this point of the season.

6. Atlanta (3-1): With a revamped young roster, the fact the Dream have won three of their first four games is a sign the team is headed in the right direction. Rookie Rhyne Howard became the seventh player in league history to score 30 or more points in one of her first four games..

7. Dallas (2-1): Impressive wins at Washington and New York have the Wings feeling confident. Coach Vickie Johnson believes she has a deep team this year and isn’t afraid to use the entire bench.

8.. Seattle (1-3): The Storm got swept by Phoenix, but were missing former league MVP Breanna Stewart, who was in health and safety protocols because of the coronavirus. She should be back this week.

9. Los Angeles (2-2): After starting the season with four consecutive road games, the Sparks are happy to be home for one game before heading back out on the road for four of the next five.

10. Indiana (2-3): It took the Fever 18 games last season to get their second win of the season. With contributions from many of its young players like NaLyssa Smith and Queen Egbo, Indiana is looking good early.

11. New York (1-3): The Liberty are struggling in many areas early in the season, including rebounding. Fortunately for them, with only one game this week New York will have practice time to get better acclimated with each other.

12. Minnesota (0-4): The Lynx can only go up from here after their dismissal start to the year. Getting McBride back will help.

Rhyne Howard of Atlanta was voted the AP Player of the Week after averaging 22.3 points, 5.0 rebounds and 1.3 steals to help the Dream win two of their three games this week. Other players receiving votes included Arike Ogunbowale of Dallas and Diana Taurasi of Phoenix,

Los Angeles announced Vanessa Shay as the team’s president on Monday. Shay joins the Sparks after working with the NWSL’s San Diego Wave FC. She served as chief revenue officer since the team’s inception in 2021, guiding the new franchise through a successful expansion effort.

Phoenix’s Brittney Griner had her pre-trial detention in Russia extended by one month last Friday, her lawyer said. She has been in custody for three months after the two-time Olympic gold medalist was detained at a Moscow airport in February after vape cartridges containing oil derived from cannabis were allegedly found in her luggage. She faces drug smuggling charges that carry a maximum penalty of 10 years in prison.

Dream at Fever, Tuesday. A rematch of the top two picks in the WNBA draft from last month. Top-pick Howard scored 33 points in Sunday’s matchup that the Dream won by six points. NaLyssa Smith, who was picked second, had 18 points before leaving with an ankle injury midway through the fourth quarter. 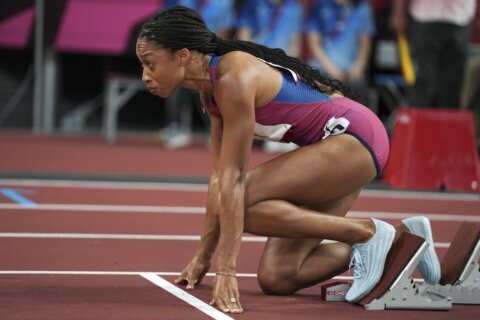 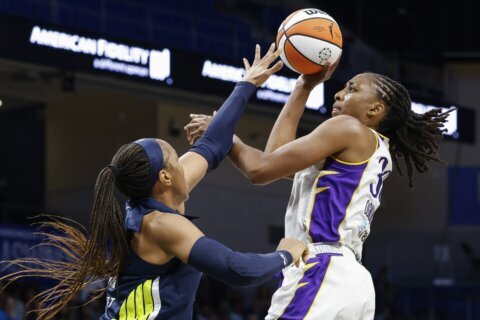 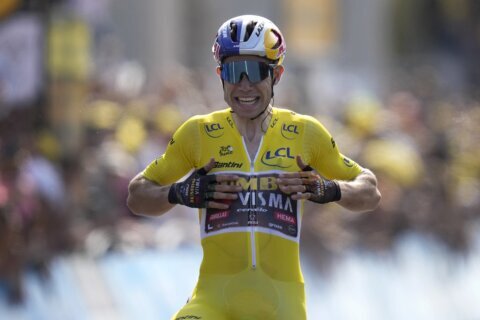