Racing in perfect, sunny conditions, the Italian gained about three-tenths of a second on her rivals with an attacking and risky approach in the middle part of the Kälberloch course.

While many racers posted faster times at the first split, no one matched Brignone’s pace in the turning steep section.

“I was really attacking from the top to the bottom,” said the overall World Cup champion from two seasons ago.

“Today was not easy to put all the pieces of the puzzle together, because there’s some girls really fast in some sections, but then making a small mistake.”

The top 20 finished within 1.04 seconds of the winning time.

Corinne Suter came closest with a strong finish to close the gap to Brignone to 0.04 seconds. It was the best result of the season for the downhill world champion from Switzerland.

“My confidence has been lacking until now, you could see it in every turn. Now I feel I am completely on the right track again,” Suter said.

Ariane Rädler was 0.17 behind in third for the Austrian’s first career podium result.

Brignone’s triumph came one week after she sat out a giant slalom in Slovenia with a knee issue. She worked with physiotherapists to get ready for the speed races this weekend.

“My knee was not perfect. But the best thing was that it was good when skiing. I had almost no problem,” she said.

“For me, it’s important. It’s an emotion. I have won before in my career but it’s always nice,” she said.

Italian teammate Sofia Goggia, who had a nasty crash in Saturday’s downhill on the same slope, started despite complaining about being sore.

“My whole body hurts. But skiing is better than going for a walk,” she said before the race, in which she avoided risk taking and finished 0.92 behind teammate Brignone in 19th.

Goggia also has two super-G wins this season, and the two Italians are clearly ahead in the super-G season standings, with Goggia leading Brignone by just five points with four races left.

“We have a strong speed team. We all come from the giant slalom, so we make good turns and super-G is a good mix,” Brignone said.

Olympic champion Ester Ledecka was six-tenths off the lead in ninth, just ahead of super-G world champion Lara Gut-Behrami, a day after the Swiss standout had won the downhill. Gut-Behrami is the only super-G winner other than Brignone and Goggia this season.

The Slovakian trails leader Mikaela Shiffrin by 37 points in the overall standings. The American opted not to race this weekend and focus on training.

Shiffrin’s teammate Breezy Johnson also sat out the races in Austria after hurting her knee in a training crash. It left Keely Cashman as the best finisher on the U.S. ski team in 23rd, her best result of the season.

The women’s World Cup returns to the Italian venue of last year’s world championships, Cortina d’Ampezzo, for another downhill and super-G next weekend. 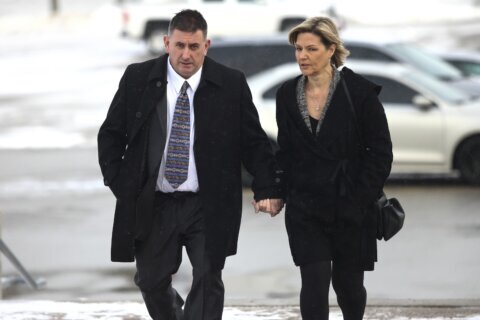