Ngannou (17-3) defended his heavyweight belt for the first time with impressive perseverance against Gane (10-1), his fellow French citizen. The champ also did it on an injured knee, and he said afterward that several doctors advised him to pull out of the bout three weeks ago.

“I’m very happy to move on through injury and all the drama, all the talk around this fight,” Ngannou said. “I’m very happy to finally get over this in the best way. … That was the point I came here tonight to make, to prove that I’m the champ, and what it takes to prove that is to defend the title. It feels pretty good. It’s always good to have the victory. It doesn’t matter how.”

Both heavyweights possess incredible power and uncommonly fluid athleticism for big men, but the champion took control of a cagey fight in the third round with the first of several takedowns. Ngannou turned a matchup between fearsome strikers into a wrestling match that showcased his much-improved game on the ground.

Just 10 fights and 3 1/2 years after his professional MMA debut, Gane appeared to have an edge in the first two rounds of his first title fight with superior striking with both fighters showed appropriate caution for each other’s power.

Gane mixed in some spinning kicks with increasing confidence, but Ngannou changed the tone of the fight early in the third when he got an arm under Gane’s leg and lifted the challenger skyward, slamming him down. Gane had never been taken down in his UFC career, but Ngannou did it repeatedly in the third and fourth rounds, showing off his markedly improved wrestling and Gane’s weaknesses in defense.

“It was not a surprise,” Gane said. “We knew already it was possible. It was one of his biggest chances to win some rounds. He did it, and he did it very well. Good job.”

Ngannou landed a leg sweep in the fifth, but Gane recovered and attempted to secure a heel hook. The bid failed, and Ngannou got back on top and finished the fight strong.

Figueiredo (21-2-1) won the penultimate bout 48-47 on all three judges’ scorecards after a frenetic, physical addition to a rivalry that has featured 13 rounds of outstanding action over the last 13 months. The trilogy began with a majority draw in December 2020 and continued with Moreno’s third-round stoppage victory last June in Arizona.

Figueiredo and Moreno (19-6-2) traded big shots throughout the third bout, but the Brazilian winner rode a strong start to his first victory since November 2020. Figueiredo was overjoyed after reclaiming his belt in his first fight since moving his training camp to Phoenix to work with former two-division UFC champ Henry Cejudo.

“I have definitely tasted the flavor of being champion once, but this one has a special flavor because it’s with a new family,” Figueiredo said through a translator. “To be able to bring this to them is very important. … This is a team that embraced me, that welcomed me, that took care of me. The only thing I want to do is go home and grab my family and bring them to America, to not only focus on this sport, but focus on this team.”

Moreno won plenty of exchanges, and he had the ferocious backing of a Southern California crowd featuring plenty of fans who drove 110 miles from his native Tijuana to watch the UFC’s first Mexican-born champion.

The judges gave it to Figueiredo by a narrow margin — but he doesn’t think this rivalry is finished.

“I’m ready for a fourth fight against Brandon in Mexico,” said Figueiredo, who later said he would also do the fight in Brazil or in the U.S.

With a fiery red stripe painted into his bleached-blond hair, Figueiredo came out with a strong first round at Honda Center, hurting the champ both with kicks and quick hands. They had several thrilling standup exchanges in the third round, each getting hurt and recovering — and Figueiredo sent Moreno crashing to the canvas with a right hand to the temple with about 8 seconds left in the round.

Moreno’s striking picked up in the fourth, and he landed a dramatic upper-body takedown 30 seconds into the fifth. Both fighters went out swinging in a brutal fifth round that concluded with 30 seconds of heedless swinging and slinging.

Moreno’s fans repeatedly chanted “Sí se puede!” and roared for anything the champion did in Orange County, an area with deep MMA roots. Moreno was backed both by the Los Angeles area’s huge Mexican-American population and plenty of traveling fans.

“It’s a weird feeling, because it’s the first time in my life when I lost a decision but I felt like I won,” Moreno said. “I’m hungrier than ever. I want to see this guy again.”

Ngannou won his title last March in the culmination of a rocky journey to the top. He was ticketed as a future champion from nearly the moment he brought his fearsome power to the UFC, but mental lapses and shocking losses delayed his ascent until a five-fight winning streak capped by his stoppage of champion Stipe Miocic. 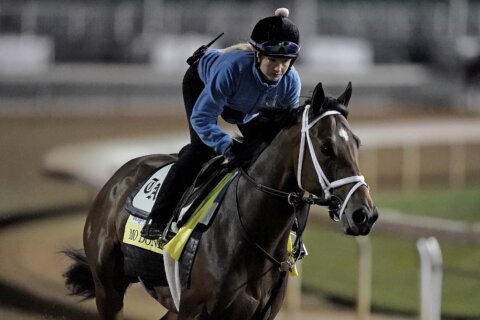 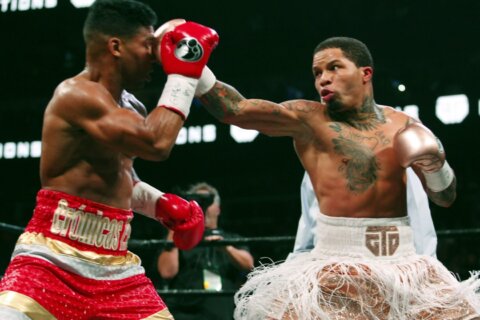