Jonquel Jones and the Connecticut Sun have dominated opponents this season, winning their last 14 games en route to the best record in the WNBA.

That earned the Sun a double bye in the playoffs that begin Thursday. And if history is any indication, they are in a good spot to reach the finals. Since the WNBA changed its playoff format in 2016, the No. 1 seed has reached the championship round every year. They are favored to win it all, according to FanDuel Sportsbook.

“This group has been remarkable with their preparation and consistency,” Sun coach Curt Miller said in a phone interview. “People will still argue Vegas has more depth and talent, but we have certainly proven to be the most consistent team this year. It’s a credit to our group’s preparation, tenacity and unselfishness to play a style that gives us the best chance to win.”

Las Vegas, which earned the other double bye to the semifinals as the second seed, is looking to make it back to the WNBA Finals for the second straight year. The Aces lost to Seattle last season, but are much improved with the return of center Liz Cambage and guard Kelsey Plum.

The top two teams won’t play until next Tuesday, though the playoffs begin Thursday with a pair of first-round matchups. Eighth-seeded New York visits No. 5 Phoenix, and seventh-seeded Dallas heads to No. 6 Chicago.

The winners will face Minnesota and Seattle on Sunday in the second round, with the Lynx hosting the lower seeded winner.

The Storm are hoping to become the first team to repeat as champions since Los Angeles did it in 2001-02. Seattle’s chances depend on the health of Breanna Stewart, who missed the last few games with an injured foot.

Some other things to know about the playoffs:

Stewart isn’t the only big-name player dealing with an injury. Phoenix veteran guard Diana Taurasi was sidelined for the team’s final few games with an ankle issue. She hopes to be ready for the first round game against New York.

THE ENGINE THAT COULD

Connecticut forward Alyssa Thomas played in the team’s final two games after injuring her Achilles’ tendon overseas in January. She was on a 20-minute limit in games, but Miller hopes that with the extra rest before the team’s first game she might be able to play more in the playoffs.

“This extra week now gives us a chance to expand it,” Miller said of Thomas, who is known as the “engine” that drives Connecticut. “It’s been a 20-minute restriction in these first few games. With another week now and consecutive practices, we’ll continue to evaluate her.”

The Minnesota Lynx have won each of their four championships in odd years (2011, 13, 15 and 17) and lately have looked like a title contender. After starting the season with five straight losses, Minnesota closed with nine wins in its final 10 games to earn the third seed.

Dallas’ Arike Ogunbowale and New York’s Sabrina Ionescu will be two of the league’s young stars making their playoff debuts. Ogunbowale shined brightest on the game’s biggest stage in college, hitting iconic game-winning shots in the Final Four and title game to help Notre Dame win the national championship her junior year. She scored in double figures in 65 consecutive games for Dallas before seeing that streak end earlier this month.

Ionescu never got a chance to play in the NCAAs as a senior because the coronavirus canceled the tournament.

LEADING OFF: Astros try to clinch trip to World Series 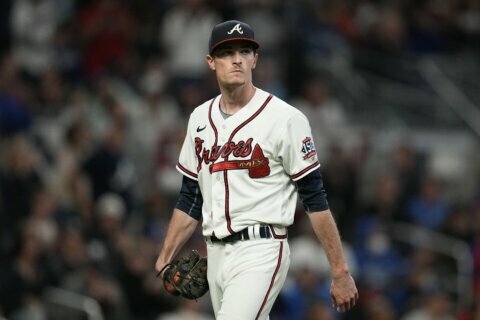