LOUISVILLE, Ky. (AP) — Sheikh Mohammed bin Rashid Al Maktoum has spent millions trying to win the Kentucky Derby, and in the process plowing money into horse racing worldwide. Now with the overwhelming favorite, Dubai’s ruler faces increased scrutiny for allegations that he has violated human rights and orchestrated the disappearance of his own daughter.

The controversy, well-known in the Middle East for a more than a year, has gotten renewed attention as Essential Quality prepares for Saturday’s race. The Kentucky Horse Racing Commission received a complaint on Wednesday from a group of human rights attorneys and students at the University of Louisville seeking to have Sheikh Mohammed banned from the Derby.

The complaint asks the racing commission to bar Sheikh Mohammed from entering any horses in any races, including the Derby and the Kentucky Oaks on Friday “until such time as his daughter, Princess Latifa, is free from captivity, or (b) hold an immediate public hearing to assess the serious allegations of his human rights abuses.”

“In consultation with counsel, and according to Kentucky regulations, the KHRC has determined the complaint does not articulate a violation of KHRC regulations,” Marc Guilfoil, the commission’s executive director, said in a statement Thursday.

One of Sheikh Mohammed’s daughters, Sheikha Latifa bint Mohammed Al Maktoum, said last spring that she is being held against her will, according to video diaries she said were recorded inside a Dubai villa and broadcast by the BBC. Sheikha Latifa was detained by commandos in 2018 after she tried to flee Dubai in a yacht.

The princess’ 38-year-old sister, Shamsa, was taken from Cambridge, England, on Aug. 19, 2000, and hasn’t been seen since. A judge in England ruled last year that Sheikh Mohammed orchestrated both abductions. The sheikh had told the the court he was relieved at having found his “vulnerable” daughter Shamsa after she went missing.

The judge was ruling on a case between Sheikh Mohammed and his second official wife, Princess Haya, over their two children. She is the daughter of the late King Hussein of Jordan, and married Sheikh Mohammed in 2004. She fled Dubai in 2019 with her two children saying that she was scared of her husband’s threats.

The cases are particularly sensitive in Britain because of economic and historic links to Dubai. Sheikh Mohammed, who is vice president and prime minister of the United Arab Emirates, is hugely influential in Britain’s racing industry because of the money he spends on breeding and racing. He is friendly with fellow horse enthusiast Queen Elizabeth II.

The sheikh is well-known in Kentucky racing circles, with his Godolphin operations based at Jonabell Farm in Lexington. While the sheikh won’t be among the limited fans in attendance Saturday, Churchill Downs spokesman Darren Rogers indicated the protest has little chance of success.

“Sheikh Mohammed bin Rashid currently holds a valid racing license in the state of Kentucky. There have been no horse racing violations and nor are we aware of any other U.S. regulatory or governmental investigations,” Rogers said. “We are focused on the three-year-old thoroughbreds who have earned their way into this year’s Kentucky Derby and our responsibility is to the integrity of the race and the safety of those horses.”

The United Nations human rights office has raised concerns about Latifa’s treatment by the UAE and sought evidence that the princess was still alive. The UAE’s embassy in London has said the princess was being cared for by her family and medical professionals.

Sheikha Latifa’s supporters have urged President Joe Biden to pressure Sheikh Mohammed to release her, saying Biden is one of the few world leaders with the stature to win her freedom.

Sheikh Mohammad has been involved in other controversies, including being accused in 2006 of encouraging the abduction and enslavement of boys for use as jockeys in camel races. A class-action lawsuit filed in Florida was dismissed.

In 2013, a trainer for the al Maktoum family’s Godolphin stable was banned for eight years by British racing authorities for administering steroids to horses. The sheikh responded by outlawing the use of anabolic steroids on horses in the UAE.

The latest controversy coincides with the sheikh’s strongest bid yet to win the Kentucky Derby after 11 previous attempts have failed. Essential Quality, an undefeated gray colt, is the early 2-1 favorite in a full field of 20 horses.

Sheikh Mohammed founded Godolphin in 1994 and is owner of Darley, one of the industry’s major breeding operations, with farms in Kentucky, England, Ireland and Australia.

Godolphin has won many of the world’s most prestigious horse races, with the exception of the Kentucky Derby. The sheikh created the lucrative Dubai World Cup race that attracts the top horses to compete in the desert. 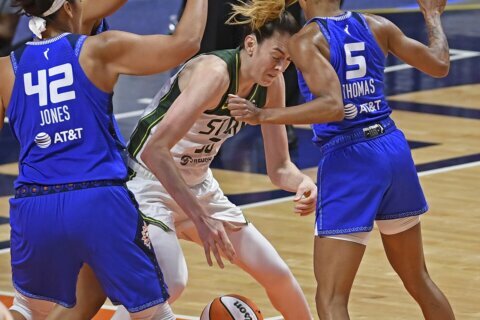