Robinson had been fourth-fastest in the opening run, trailing 2018 Olympic champion Shiffrin by 0.77 seconds, yet turned it into a victory by 0.28 at Lenzerheide. Meta Hrovat placed third, trailing Robinson by 0.48.

It was the 19-year-old New Zealander’s third win in giant slalom on the World Cup circuit.

One day after being crowned the overall World Cup champion, Petra Vlhova ended her tiring season with an 11th-place finish.

The first-ever Slovakian champion in the 54-year World Cup history started 31 of the 33 races. Her emotionally exhausting Saturday included being congratulated in a telephone call with the president of Slovakia, Zuzana Čaputová.

Vlhova took the overall title from Federica Brignone, who placed fourth Sunday and talked of a difficult season held with strict travel and health protocols and no fans allowed in finish areas.

“I’ve had enough of this season. It was really long, it was really not good,” a smiling Brignone told Swiss broadcaster RTS citing the lack of atmosphere at races.

Still, Brignone finished with a flourish as only Robinson was faster in the second run.

The first run in the morning was notable for a curious exit by world champion Lara Gut-Behrami, who lost out Saturday to Vlhova in the overall standings.

Gut-Behrami at first seemed to simply stop racing and left broadcasters mystified when she skied out.

The Swiss star, overall World Cup champion in 2016, began to stand up straight approaching the third gate, relaxed her arms and slowly skied back across the hill wide of the next gate.

It was a strange end to her impressive career revival in 2021. Since January, Gut-Behrami won six World Cup races — including four straight in super-G — plus two gold medals and a bronze at the worlds last month in Cortina d’Ampezzo, Italy.

“Lara didn’t have enough energy to give it all and didn’t want to take the risk to get injured and that’s the reason why she stopped,” Swiss team spokesman Jérôme Krieg said in a statement.

There was quick speculation that Gut-Behrami was making a protest against organizers after comments earlier in the week critical of the race week scheduling rules.

The downhill and super-G events — where Gut-Behrami is stronger than Vlhova — were canceled by difficult weather conditions on Wednesday and Thursday. They could not be moved to Friday when the little-regarded team parallel racing event went ahead without problems.

Krieg said fatigue was “the only reason (for stopping). She’s happy about her season, that it is over now and that she is healthy.”

Gut-Behrami did not stop to speak with media in the finish area, and was due to return to the course for trophy presentations. 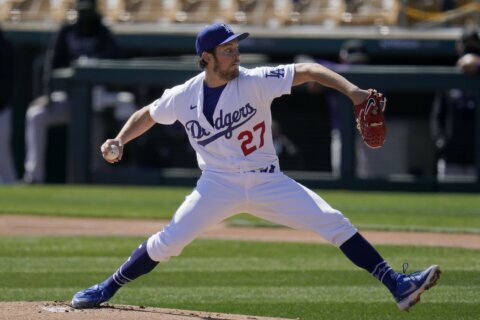