SAN DIEGO (AP) — In a 2020 season that has had all sorts of odd twists, Aaron Boone will be managing the New York Yankees in an AL Division Series in an NL ballpark in the city where the Boone family dynasty has its roots.

While Boone is focused on what’s expected to be a tough series against the AL East rival Tampa Bay Rays, he said it’s always good to come back to the area that’s special to the first family to have three generations of big leaguers.

Boone’s grandfather, Ray, and father, Bob, went to San Diego high schools that aren’t far from Petco Park, which will host the Yankees-Rays ALDS and then the ALCS in one of MLB’s bubbles.

Due to COVID-19 protocols, this will be strictly a business swing for Boone, whose parents and brother Bret still live in the San Diego area.

“Unfortunately I don’t get to see them on the trip because of the bubble and things like that and so they won’t be coming to the games or having lunch or anything like that,” Aaron said Saturday, two days before the series starts. “But it is always special to come back to Southern California. Whether I come here, to Anaheim or to LA, it’s special to me.

“With me and my family now living on the East Coast, I don’t get out here that much. It’s definitely good to be here in this kind of weather, especially in October,” Boone said.

Family patriarch Ray Boone followed Ted Williams at San Diego’s Hoover High and was a major league infielder with six teams from 1948-60. He broke in with Cleveland late in the 1948 season and had one plate appearance in the Indians’ World Series victory against the Boston Braves. He was an All-Star third baseman for Detroit in 1954 and 1956. He died in 2004 at 81.

Ray’s son Bob attended Crawford High and played 19 seasons in the big leagues for three teams, including winning the World Series with Philadelphia in 1980. A catcher, he was a four-time All-Star and seven-time Gold Glove Award winner. He managed Kansas City from 1995-97 and Cincinnati from 2001-2003.

Aaron and Bret are Bob’s sons. Both were born in the San Diego area, went to high school in Orange County, where Bob played for the Angels from 1982-88, and then played at Southern California before giving the family a special place in baseball history when they reached the majors.

Aaron, 47, played from 1997-2009 with six teams, including the Yankees. He propelled the Yankees into the 2003 World Series with an 11th-inning home run against the Boston Red Sox in Game 7 of the ALCS.

The both played in the 2003 All-Star Game, Bret with Seattle and Aaron with Cincinnati.

Bret Boone said he’s content to watch the games on TV, although he still has painful memories of when the Bronx Bombers swept his Atlanta Braves in the 1999 World Series and beat his Seattle Mariners in the 2001 ALCS.

“Good luck to my brother; it’s going to be a battle,” Bret said. “Reluctantly, with my playing career, now that Aaron is in the position he is, I have to kind of by obligation be a semi-Yankee fan. From my playing days, it really hurts. But when it comes to supporting my brother, it’s a pretty easy deal.

“They beat me a couple of times in the postseason so a lot of bitter Yankee memories,” Bret added. “Lot of good memories at old Yankee Stadium but a lot of beatdowns.”

Bob Boone is vice president and senior advisor to the general manager with the Washington Nationals, who signed Bret’s son Jake as an undrafted free agent this year. Jake Boone, a shortstop who went to San Diego’s Torrey Pines High, was originally selected by the Nationals in the 38th round of the 2017 draft but chose to honor his commitment to Princeton.

While finishing his Princeton degree online, Jake Boone is currently in instructional ball, which his grandfather is helping to oversee.

Bob Boone chuckled at the thought of Aaron managing the Yankees in the postseason in San Diego.

“It’s definitely a different feeling this year, very unique,” Bob Boone said by phone from West Palm Beach, Florida, where he’ll watch the playoffs on TV. “Actually kind of interesting, I think, because it’s so unique as to what’s happening. But it’s certainly been a different year for baseball.”

Bob Boone said he speaks with Aaron a few times a week. Last October, things got interesting between the two when Bob was tasked with doing advance scouting in case the Nationals and Yankees both reached the World Series. The Nationals did, and won it, but the Yankees were eliminated in Game 6 of the ALCS when Houston’s Jose Altuve hit a walk-off homer.

When Washington general manager Mike Rizzo asked Boone about doing the advance work, “I said, ‘Well, I’ve already seen about 120 of their games. I can do it right now if you want.’

“That was a real strange time for me because with Aaron being the manager, I thought, maybe I should recuse myself,” Bob Boone added. “The strange part of it is, when we talk, all of our talks surround baseball, and all of a sudden I was kind of working against the Yankees with the Nationals.”

“The things you want to talk about, like for me, ’Is (Giancarlo) Stanton going to play tomorrow? How’s his leg? How’s his knee? Things I can’t ask and he can’t answer. We had a lot of silence surrounding baseball last year,” he said.

There was also an interesting dynamic at Bob’s house.

“When I’m home we’ll watch both games every night. I tell my wife, Sue, ‘Hey, turn on our game,’ and all of a sudden the Yankee game will pop up and I have to explain, ’No, we work for the Nationals and the check says the Nationals. So when I say turn on the game, turn on the Nationals.”

Bob Boone, 72, ended up with another World Series ring.

“It’s the second one I got. It took me 39 years to get there. I thought, sheesh, maybe I should retire.” 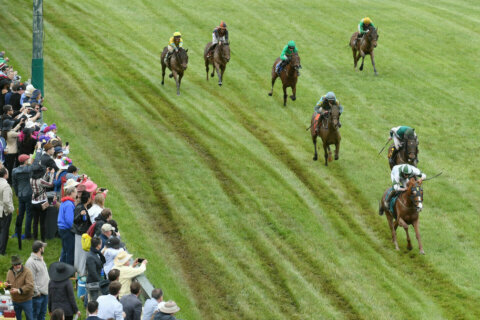