PUY MARY, France (AP) — The slow-burning fight for the Tour de France’s yellow jersey erupted in earnest on the remains of a once-giant volcano on Friday, with race leader Primoz Roglic using its punishing slopes to grow his overall lead.

Glancing up the final climb that reared skyward ahead, Roglic told himself: “Whoa, this will hurt.”

But it hurt even more for the Slovenian’s rivals.

One of Stage 13’s big losers was Egan Bernal, last year’s champion from Colombia who was unable to match Roglic’s pace on the arduous final ascent of the Puy Mary.

Bernal tumbled from second to third in the overall standings and slumped exhausted across his handlebars at the top.

Tadej Pogacar, the only rider able to stay with Roglic on the last climb, vaulted from seventh to second overall.

He trails Roglic by 44 seconds. The Tour rookie, who will celebrate his 22nd birthday the day after the race finishes and is also from Slovenia, might even have been in the yellow jersey by now had he not suffered a setback earlier in the Tour.

On Stage 7, he tumbled out of the top 10, having lost valuable time in crosswinds. But Pogacar has grittily clawed his way back, showering the race with his precocious talent by winning Stage 9 and now creating the possibility of an all-Slovenian battle for the podium’s top spots in Paris if rivals can’t halt their momentum.

Bernal fell back to 59 seconds behind Roglic, the winner of last year’s Spanish Vuelta who is increasingly looking the firm favorite to win on the Champs-Elysees in eight days.

The intense stage, one of this race’s hardest with a no-respite roller-coaster succession of seven ascents of note, was won by Colombian rider Daniel Martinez. He had been part of a breakaway of lower-order riders left to chase the stage victory by Roglic and other top contenders because they weren’t threats for the yellow jersey.

Martinez, winner of the Critérium du Dauphiné race in August that served as a tune-up for the Tour, outsprinted German rider Lennard Kämna at the top of the Puy Mary climb.

The 191-kilometer (119-mile) trek through the hills and mountains of the Massif Central range was one of the toughest of this Tour, with the greatest total elevation gain of any stage — a whopping 4,400 meters of climbing in all.

The effort was written large on the face of Bernal and other riders as they slowly lost contact with Roglic on the Puy Mary, with gradients of 15%.

But he made it look easy, showing how tough it will be to wrest the yellow jersey from him in the climactic last week.

“Every day is closer and closer to the end,” he said. “As long as you can gain time, every second is good.”

At the start in the spa town of Chatel-Guyon, just 1 minute, 42 seconds separated Roglic and 10th-placed Spanish rider Mikel Landa — the smallest Stage 13 gap between the top 10 of any Tour since World War II.

But Roglic changed all that on the road. The gap between him and the new 10th-placed rider, Enric Mas, is now 2 minutes, 54 seconds.

French riders Guillaume Martin and Romain Bardet, who had been third and fourth overall, respectively, tumbled out of the top 10 — and the race.

Bardet was hindered by a mid-stage crash that also took down Dutch rider Bauke Mollema, who had been 13th. Bardet scraped himself off the tarmac and carried on. Mollema broke his left wrist and was forced to abandon what had been his 10th Tour. Bardet’s team said Friday night that he sustained a concussion and pulled out of the race.

The riders will have no pause in the coming weekend of climbing, before the second and last rest day on Monday, when all racers and team staff will be tested again for COVID-19.

Saturday’s lumpy Stage 14 with one mountain pass, multiple hills and a downhill finish to the gastronomic city of Lyon isn’t likely to shake up the top order. Top contenders will be bracing instead for a very tough uphill finish on Stage 15 on Sunday.

Sunday’s long and winding ascent of the Grand Colombier in the Jura mountains, one of five ranges scaled by this Tour, could again shake up rankings. It is preceded by a rapid succession of two other tough climbs that will burn the riders’ legs before they battle on the steep slopes to the finish. 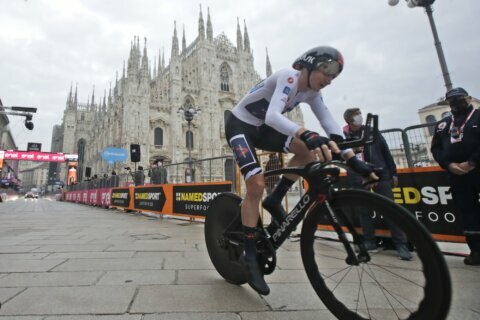 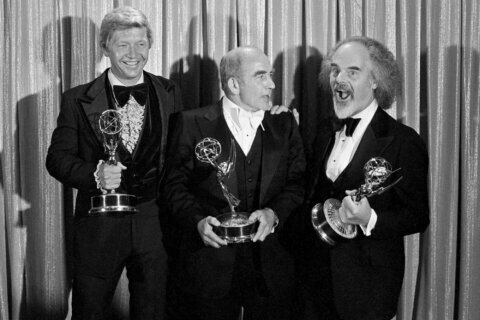