Ex-UFC champ Whittaker back on track with decision over Till

Veteran heavyweight Fabrício Werdum finished Alexander Gustafsson by armbar submission midway through the first round, and Maurício “Shogun” Rua got an entertaining split-decision victory over fellow Brazilian veteran Antônio Rogério Nogueira in the last of four UFC shows in two weeks from the mixed martial arts promotion’s fan-free bubble in the Middle East.

The main event was a messy, technical fight that turned into an encouraging step forward for Whittaker (21-5), who ended the victory with a smile and a horrifically bloody cut above his left ear.

Whittaker won his middleweight belt in 2017, but the Australian brawler defended it just once and missed significant time with injuries. He lost the title last October to New Zealand’s Israel Adesanya, and Whittaker then withdrew from a scheduled comeback fight because he felt burned out on MMA.

He didn’t have an easy return, but the ex-champ still handled his matchup with Till (18-3-1), the touted British prospect.

“That fight was so stressful,” Whittaker said. “I hope the fans and everybody can appreciate it. That was one of the most technical fights I’ve ever had to fight. We both knew each other’s strengths. I had to really adapt on the go.”

Till dropped Whittaker with a sneaky elbow in a strong first round for the Englishman, but Whittaker knocked down Till in the second and then hurt him with elbows on the ground. The next three rounds weren’t quite as exciting, but Whittaker appeared to land more accurate strikes while fighting at his preferred distance.

Till still caught Whittaker with a late shot that opened a major cut on Whittaker’s head, but all three judges scored it 48-47 for Whittaker.

Till was among the UFC’s brightest rising stars until welterweight champ Tyron Woodley stopped him in September 2018. Till then got knocked out by Jorge Masvidal in London, but rebounded with a narrow win over Kelvin Gastelum last November.

After returning from a stoppage due to the coronavirus pandemic with shows in Florida and Nevada, the UFC has spent July on Yas Island, the popular Abu Dhabi tourist destination. The shows all started before dawn to reach North American audiences.

The UFC has several upcoming shows scheduled for the gym on its corporate campus in Las Vegas, but President Dana White has said he expects to be back at Fight Island later this year, particularly if the pandemic worsens in the U.S.

The 38-year-old Rua (27-11-1) and the 44-year-old Nogueira (23-10) put on an entertaining performance in their third fight in a rivalry that began 15 years ago. Rua won all three of those bouts, but he barely won this lively striking matchup, triumphing 29-28 on two cards.

“I am the happiest man in the world today,” said Rua, who has won five of his last seven fights. “Every fight, Nogueira has made it hard. I took one more step in my career tonight.”

Nogueira said he probably will retire after this defeat, although his reluctance was visible. The twin brother of fellow UFC veteran Antônio Rodrigo Nogueira has been a pro MMA fighter for 19 years, including the last 11 in the UFC.

“I know I can (still) fight very well, but I think it’s time for the new generation to come,” Nogueira said.

Werdum (24-9-1) earned his first victory since 2017 with an impressive submission of Gustafsson (18-7), the former light heavyweight title contender who briefly retired last year.

Werdum turns 43 next week, but the famed jiu-jitsu practitioner took apart Gustafsson on the ground for an armbar. Gustafsson, who nearly beat Jon Jones for the light heavyweight title in 2013, has lost three straight fights and five of seven.

On the undercard, welterweight Khamzat Chimaev set a UFC record with his second victory in only 10 days, finishing welterweight Rhys McKee with punches just 3:09 into the first round.

Chimaev (8-0) made his UFC debut as a middleweight in Abu Dhabi on July 15, stopping John Phillips with a choke in the second round despite fighting on short notice in a higher weight class. His 10-day gap between victories is the shortest in UFC history since the end of one-night tournament competition, breaking Chas Skelly’s record of 13 days in 2014.

“I can fight (again) after one hour,” Chimaev said with a smile. “Maybe if you give me a minute, if somebody is injured, just tell me. I’m going to smash everybody. … How many fighters in my division? I can smash the whole division. Easy work, easy money.” 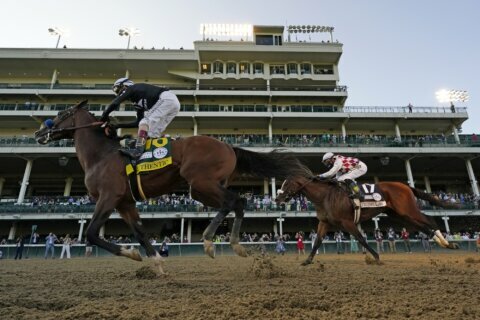