The Latest: Indiana hopes to have athletes back in mid-June

The Latest on the effects of the coronavirus outbreak on sports around the world: ___ Indiana University hopes to have…
Listen now to WTOP News WTOP.com | Alexa | Google Home | WTOP App | 103.5 FM

Indiana University hopes to have some student-athletes back by mid-June.

President Michael McRobbie posted a 22-page plan on his web site to reopen the university in stages, which includes the return of at least a percentage of all students this fall.

The release comes one day after the NCAA approved a measure to lift the moratorium on voluntary workouts for football and men’s and women’s basketball players. It is set to take effect June 1.

But Indiana’s restart committee decided to allow researchers back on campus first, around June 1. Athletes could return about two weeks later. The student body would come back to start the fall semester.

The plan includes several preventative measures, such as social distancing, and remains contingent on keeping COVID-19 in check.

The committee also decided large events should be evaluated individually based on their importance to the university.

IndyCar has made more revisions to its schedule because of the coronavirus pandemic.

The open-wheel series, which is slated to finally begin June 6 at Texas Motor Speedway, said Thursday the June 27 race in Richmond, Virginia, and the street course race in Toronto on July 12 have been canceled.

IndyCar will not race after Texas until an event July 4 at Indianapolis Motor Speedway. The race scheduled for June 21 at Road America in Wisconsin has been changed to a doubleheader on July 11-12.

The season finale had already been changed to Oct. 25 on the streets of St. Petersburg, Florida, which was scheduled as the season opener before the series was suspended March 13.

The current IndyCar schedule is now 14 events that includes three doubleheaders and three trips to Indianapolis Motor Speedway. The Sept. 13 race in Portland is in jeopardy because Oregon has banned large gatherings through the end of September.

Some Louisville football and basketball players will return to campus Wednesday in a phased approach and begin voluntary workouts on June 8.

The first phase of 30 football players and 15 men’s and women’s basketball players will arrive next week after being advised of safety protocols. Testing and physicals will begin June 3, with voluntary training not directed by coaching staffs to begin five days later. Training will take place at three facilities with limited capacity.

Pending additional direction from the NCAA, Louisville can include up to 15 swimming and diving athletes in the phase and open its natatorium with limited capacity. The next phase of 30 football players and 60 Olympic sport athletes would arrive June 10 and begin training June 22 with additional facilities open.

Miguel Cabrera and his wife Rosangel are partnering with the Detroit Tigers Foundation to donate $250,000 to organizations in Detroit that serve families and children.

The remaining $10,000 will support a philanthropic collaboration organized by G1 Impact to hire Detroiters to manufacture 100,000 reusable, hospital-grade masks for children and families in Detroit.

The joint $200,000 donation will be split equally between Highmark Health and University of Pittsburgh Medical Center. The Highmark Health donation is earmarked for creating a mobile COVID-19 testing unit that will focus on under-served populations in the Pittsburgh area.

The donation to UPMC will benefit the UPMC Children’s Hospital Helpers Fund, which supports families and caregivers who are impacted by COVID-19.

North Carolina and North Carolina State will begin fall classes on Aug. 10 and forgo fall breaks in order to finish by Thanksgiving to get ahead of a potential second wave of COVID-19.

UNC Chancellor Kevin M. Guskiewicz introduced a Roadmap for Fall in a letter Thursday that includes “off ramps” options if conditions change. Class sizes will be reduced with time extended between classes, some of which may be conducted remotely.

Faculty and staff will return in a phased approach and should initially expect staggered and alternating work schedules. UNC will also emphasize adherence to public health guidelines, including physical distancing, wearing face coverings and increased hand washing. The school will observe Labor Day and University Day and complete the semester by Nov. 24.

N.C. State Chancellor Randy Woodson announced that the school will begin classes nine days earlier than originally scheduled and forgo fall break to also finish by Thanksgiving. Students will not return to campus for the remainder of the year and winter commencement will be announced later.

East Carolina is eliminating its men’s and women’s tennis and swimming and diving programs to help reduce a $4.9 million budget deficit.

The move affects 68 student-athletes and nine coaches and reduces ECU’s sponsored sports from 20 to 16, including nine for women. The NCAA requires Division I FBS schools to carry minimums of 16 sports, eight for women.

“The coaches and student-athletes for these respective sports have all impacted our department and the Pirate Family in a positive manner,” athletic director Jon Gilbert said in a release. “This decision was not made lightly. The history and success of the swimming and diving programs and the tennis programs will continue to be celebrated at East Carolina.”

ECU interim Chancellor Ron Mitchelson stated that the athletic budget was not sustainable pre-COVID-19. The deficit began to grow significantly with the pandemic where the impact was immediate and would affect future revenue and expenses.

ECU will honor scholarships for athletes who remain at the school.

The National Museum of Racing and Hall of Fame has canceled its induction ceremony in August because of health and safety concerns related to the COVID-19 pandemic.

Hall of Fame president John Hendrickson says the museum believes it’s “in the best interests of everyone involved and for the integrity of the event to postpone the ceremony for a year.”

The Hall of Fame ceremony was scheduled for Friday, Aug. 7, in Saratoga Springs, N.Y. This year’s class includes trainer Mark Casse, jockey Darrel McHargue, horses Wise Dan and Tom Bowling, and Pillars of the Turf Alice Headley Chandler, Keene Daingerfield, Jr., and George D. Widener, Jr. They will be inducted with the class of 2021.

The 44th Annual Museum Ball scheduled for Aug. 14 also was canceled. It’s traditionally one of the highlights of the Saratoga summer social season.

Dresden says on its website that the latest positive result was found in a fifth wave of tests conducted on Wednesday. It adds that another “category one” close contact of its coaching staff has also tested positive for COVID-19.

The player, staff member and staff member’s contact person must now go into quarantine at home for 14 days.

Dresden’s entire team was ordered by local health authorities into 14 days of quarantine on May 9 after two players tested positive.

The club says that all players who tested positive before were cleared in the fourth and fifth wave of tests and that they and the rest of the team will be able to resume training on Saturday.

Dresden was scheduled to play at Hannover last Sunday but couldn’t participate because of the quarantine order. That game was rescheduled for June 3.

Dresden is scheduled to resume play on May 31 against Stuttgart.

Manchester United says it believes it will miss out on $24 million because the Premier League will have to make refunds to broadcasters even if the pandemic-disrupted season is completed.

The league is in talks with its rights holders about rebates because of delays and changes to the broadcasting schedule. The season was suspended in March.

The rebates will vary based on the final position in the standings and the number of games aired live. United is in fifth place with nine games remaining.

The Premier League hasn’t provided details of the broadcasting rebate.

The governing body of swimming has postponed the short course world championships for a year because of the coronavirus pandemic.

FINA says the championships scheduled for December in Abu Dhabi will now be staged Dec. 13-18, 2021, in the United Arab Emirates because of the “the uncertainty related with the evolution of the COVID-19 pandemic worldwide.”

FINA president Julio C. Maglione says swimming organizers have worked closely with the United Arab Emirates’ authorities and “we believe this is the most suitable solution for all those taking part in this competition.”

A general congress to elect the FINA Bureau for the years 2021-25 will be staged in Doha, Qatar, on June 5, 2021. The new members of the bureau will start their terms immediately after the Tokyo Olympics in 2021. 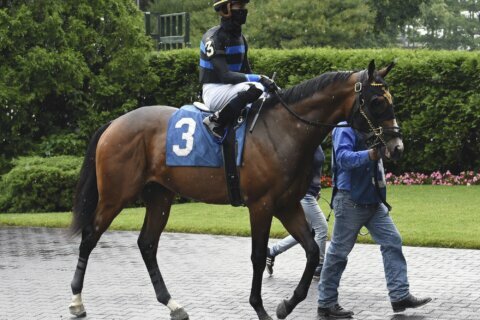 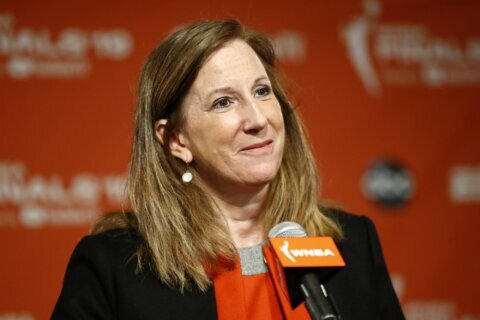 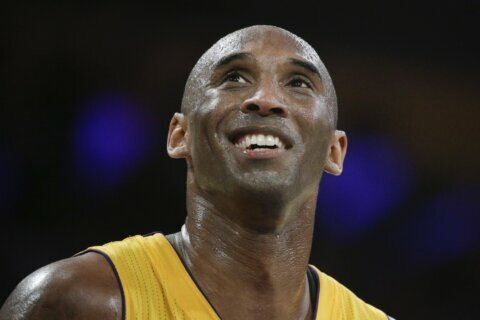