He would not make it to the medals stand, the way Tommie Smith and John Carlos did in 1968. But the starting line Sunday might have been the first of several opportunities for the 23-year-old Lyles to spread his message.

In what went down as the first notable demonstration of the track trials, Lyles made a subtle gesture, wearing a black glove — minus the fingers — on his left hand, and raising his fist when he was introduced before the race.

He wound up seventh, but will be a favorite next weekend in the 200. If he wins there, he’ll be favored to stand on the podium at the Olympics as well.

His message through it all: Black Lives Matter.

“We’re still dying in the streets,” Lyles said after a race won by Trayvon Bromell. “Just because we stopped talking about it in the news or just because the Olympics are going on, doesn’t mean it’s not happening. I am Black.”

Lyles has worn a black glove at a race before trials. It resembles those worn by Smith and Carlos, the sprinters whose raised fists on the medals podium in Mexico City stand as the iconic single moment of social protest in sports history.

The United States Olympic and Paralympic Committee — with guidance from its recently formed Council on Racial and Social Justice — determined a few months ago that it would not sanction athletes who use the trials to demonstrate.

These trials, which feature subdued medals ceremonies with no national anthem, are a test run of sorts in the lead-up to the Olympics. In Tokyo, IOC officials say Rule 50, which bans demonstrations inside the lines, will remain in force. But the USOPC has vowed not to punish American athletes who partake in an “acceptable demonstration,” as dictated by their guidelines.

Allowable forms of demonstration include holding up a fist, kneeling during the anthem and wearing hats or face masks with phrases such as “Black Lives Matter” or words such as “equality” or “justice.”

In the past, Lyles has shown his support for Black Lives Matter through both speech and music. He released a song titled “ A Black Life.”

On SoundCloud, the song is accompanied by a caption: “I always think to myself what more can I do to help spread the word of injustice. This time I decided to use music. This song explains the pain and fear that almost all black people have to deal with in their life.”

He reiterated that message after the race, where he got off to a slow start and finished second-to-last.

“To be honest, you could hear a report about me tomorrow dying for no reason,” Lyles said. “I’m pretty sure some people would be sad. But at the end of the day, I wouldn’t be the only one — probably another after that, another after that. This needs to stop.”

USA Track and Field has made a number of stickers available to the athletes. Among the messages: “Be Kind,” “Courage,” “Together,” “Respect.” There’s also one with a silhouette of the iconic scene of Smith and Carlos on the medals stand.

“It’s something I believe in,” said Lyles, who’s the reigning world champion in the 200. “I felt like it was important I throw up some symbol. I’ve done it before and I’m going to continue to do it.” 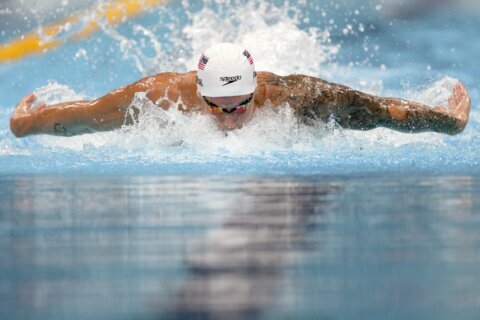 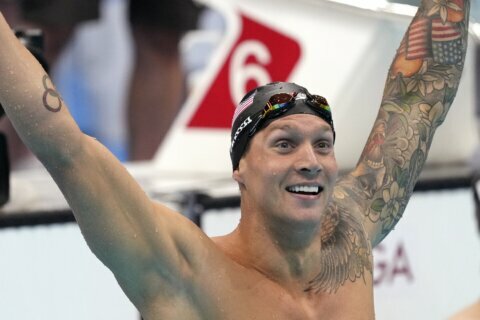