What the six-time men’s national gymnastics champion didn’t expect was his body to give out on him. Yet as the 29-year-old walked onto the floor for his fifth event during the first day of U.S. Championships on Thursday, he could tell his tank was empty.

The result, a seventh-place finish and a likely end to his long run at the top. Mistakes on parallel bars, floor and pommel horse left him with a score of 82.450, well off the pace set by two-time NCAA champion Brody Malone at 86.250.

And while there’s plenty of time to regroup in what is basically a warm-up meet for the U.S. Olympic Trials later this month, Mikulak will spend Friday trying to figure out what happened to the swagger that has come so easily for so long.

“I just could not get into that confident mindset,” Mikulak said. “And I think I was just trying to dodge fear most of the time. And it kept me in a more of a flight response rather than a fight (response).”

Mikulak hadn’t performed under the lights since the 2020 American Cup, a layoff due almost entirely to the COVID-19 pandemic. He spent the downtime getting engaged and focusing on his mental health. He arrived at Dickies Arena with a renewed appreciation for his long run of success and stressed he was going to try and savor what is likely the final few months of his career.

Yes, he expected to be a little uneven. He just didn’t expect quite so many miscues.

“I’m going to think a lot going into (Saturday), try to see what I can adapt, what I can change, some quick tweaks to give me that confidence back,” Mikulak said.

Mikulak fell to the mat in the middle of his parallel bars routine, his best event. He blamed the pressure.

“You’ve got to look into the stress of the situation being the cause,” Mikulak said. “Because when you’re calm, cool and collected like that (mistake) never happens.”

Then again, he wasn’t the only one who stumbled.

Yul Moldauer, the only man to win a national title outside of Mikulak since 2013, came off the horse in the middle of his routine but rallied to finish in a tie for second with Brandon Briones at 83.600.

While Moldauer was pleased with his overall performance, he also found himself having issues on pommel horse yet again. The event has dogged him for years. He hit 15 straight sets in practice, intent on trying to show the judges he could be trusted when it counts. Yet a small mistake on hand placement sent him hopping off midway through his routine.

Shane Wiskus, who left the University of Minnesota to train at the U.S. Olympic and Paralympic Training Center last fall, took a major step after landing his vault but recovered to finish fourth.

Malone called his victory at the NCAA championships in April a major confidence booster. And while Mikulak and Moldauer looked shaky at times, Malone admitted the meet was sort of a comedown following NCAAs.

“I think I was definitely more nervous going into that competition than this one because there’s so much on the line for the team,” said Malone, who helped the Cardinal to a second straight national title.

Malone hardly looked overcome by the stakes. He tied for the highest score on vault and finished in the top four in five of six events.

“My goal is to push for the Olympics,” Malone said. “I think tonight, everything went well. I kind of stayed in the zone pretty well and just took it.”

The meet is merely a warm-up of sorts for the U.S. Olympic Trials in St. Louis later this month. USA Gymnastics amended its selection process this spring after a scheduling conflict with the Pan American Gymnastics Championships this weekend led the Americans to send several Olympic hopefuls to Brazil.

Rather than use the results from both the national championships and Olympic Trials to select the team, the committee will now only focus on what happens at Trials.

That gives Mikulak plenty of time to return to form. Yet a seventh national title appears out of reach. Mikulak insists he’s hardly concerned. At the moment he’s intent on trying to showcase the form that’s made him a fixture on the national team for nearly a decade.

“The bar is set real low,” Mikulak said with a laugh. “I should be able to improve a lot going into Saturday.” 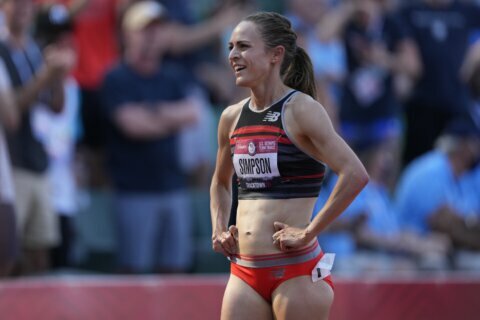