ROME (AP) — Organizers for the 2026 Olympics are sticking with their plans to spend 50 million euros ($60 million) to rebuild an abandoned bobsled track in Cortina d’Ampezzo and take on the risky proposition of holding speedskating at an outdoor oval in Baselga di Piné.

Italian Olympic Committee president Giovanni Malagò, who also leads the organizing committee for the Milan-Cortina Games, offered an update on the venues Tuesday during a presentation of the 2026 logos.

“As far as the track for bobsled, skeleton and luge, all of the problems have been resolved,” Malagò said. “It’s been completely resolved, thanks also to the excellent cooperation between the organizing committee, the Veneto region and (Veneto president) Luca Zaia, the town of Cortina, the IOC and the international federations.”

The location of the sliding venue has been a source of debate because of concern from the International Olympic Committee about runaway spending and white elephant venues.

The IOC had suggested that instead of spending heavily to rebuild the Cortina track, that sliding events could be contested at a venue in neighboring Switzerland (St. Moritz) or Austria (Igls) instead.

Despite its closure 13 years ago for financial reasons, the century-old bobsled track in Cortina is still a source of pride in the Dolomites resort.

For the speedskating oval, there were recent tests to see whether the sport could be held at Milan’s outdoor Arena Civica, as well as calls to use the indoor oval in Turin that was built for the 2006 Games.

The venue in Baselga, which hosted the 1995 world championships, is located in the Trentino region.

“As far as the speedskating oval, I’ve always defended a choice that I think is the correct choice, which is what was written in the dossier that we won with,” Malagò said. “That needs to be respected.”

The last time speedskating was held outdoors at the Olympics was for the 1992 Albertville Games, with the IOC having since preferred the controlled environment of indoor venues.

Outdoor ice is notoriously tough to keep in shape for all competitors to have a fair chance at a medal.

High temperatures made matters even worse in Albertville, where one recurring term was “slush,” with skaters ploughing through soft ice that sometimes had a thin sheet of water on top.

Over longer distances, when a competition session can take two hours, conditions at outdoor tracks can change to the extent that gold can depend as much on the starting time as on four years of preparation.

After Albertville, the consensus was never to return to outdoor skating for the Olympics — until now, under IOC reforms aimed at cost-cutting.

The venue locations could be finalized at the IOC’s coordination commission visit next month.

Meanwhile, organizing committee CEO Vincenzo Novari suggested that road and railway works aimed at improving access for the games are already behind schedule — despite $1 billion destined for infrastructure development from the Italian government.

“We have to accelerate on the infrastructure works, because we don’t have much time,” Novari said. “We’ve got to hurry. We can’t be late.”

Added Malago: “The sports side is where there’s the least amount of concern.”

As for the logo, a futuristic white-on-white design was unveiled as the emblem for the games following an online vote. Nearly a million votes were cast — 871,566 to be exact — over the last two weeks from Italy and 168 other nations.

The “Futura” logo received 75% of the votes among the two finalists, winning easily ahead of the more traditional “Dado” option.

“This white-on-white logo represents our aim for these next five years, to leave a sustainable legacy from the games,” Novari said.

The 2026 Paralympics logo, which was also unveiled during the online presentation, features a similar design with more color. 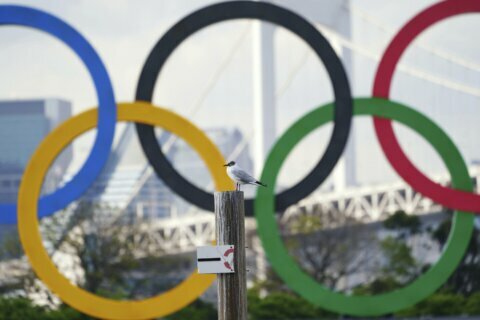