PRAGUE (AP) — The war in Ukraine threw a wrinkle into the National Hockey League’s planned return to Europe next month to play its first games outside North America since the start of the pandemic.

The Czech Foreign Ministry told two NHL teams opening their seasons in Prague that any Russian players would not be welcome because of Russia’s invasion of Ukraine. It may not amount to an outright ban and league officials downplayed the potential impact, but it added a layer of uncertainty to a Global Series the NHL is proud of.

The Nashville Predators and San Jose Sharks are set to play regular-season games Oct. 7 and 8 at Prague’s O2 Arena as part of the series that is intended to put the world’s top players on display, primarily in Europe. There are not many Russians on the two rosters: Nashville has forward Yakov Trenin and San Jose has Alexander Barabanov, along with Evgeny Svechnikov, who is in training camp on a tryout agreement.

“We can confirm that the Czech Foreign Ministry has sent a letter to the NHL to point out that, at this moment, the Czech Republic or any other state in the (visa free) Schengen zone should not issue visas to the Russian players to enter our territory,” Deputy Foreign Minister Martin Smolek said in a statement.

NHL Deputy Commissioner Bill Daly told The Associated Press on Thursday he has “no concern” with players either traveling to Prague or suiting up to take the ice. He added that players have appropriate visas.

Neither Daly nor the ministry would say if the league replied to the letter.

Agent Shumi Babaev, who represents Trenin, echoed Daly’s sentiment that he did not foresee any problems. Agent Dan Milstein, who represents Barabanov and Svechnikov, declined comment.

“We’re a team, so if they say some guys can’t go, either we all go or no one goes,” San Jose general manager Mike Grier said. “We’re a group. It’s not the players’ fault. They didn’t do anything wrong. I don’t think they should be punished for it. We stand with them, and we’re all together as one in here.”

While the Predators deferred to the league, Sharks captain Logan Couturier echoed Grier.

“My view is we’re a team in here and if we go over there, we want everyone on our team to be there,” Couture said. “All the guys that are going to make the team are a part of our team.”

The ministry said it informed the league “about ongoing negotiations about banning entry for those citizens of the Russian Federation who already had received valid visas before.” One wrinkle involves passports from other countries or visas issued by other European countries.

The Czech ministry said a ban on Russian athletes in sports events in European Union countries was also recommended by EU sports ministers.

The Czech Republic was one of the first EU countries to stop issuing visas to Russian nationals following the February invasion of Ukraine. Exceptions include humanitarian cases and people persecuted by Russian President Vladimir Putin’s regime.

The NHL never considered banning Russians, many of whom are some of the most skilled hockey players in the world. Commissioner Gary Bettman told The AP during the spring Russians “are performing in the NHL for their NHL team for NHL fans.”

The league did bar players from taking the Stanley Cup from going to Russia or closely allied Belarus this summer because of their roles in the invasion of Ukraine. Valeri Nichushkin was the only Russian player on the Cup champion Colorado Avalanche.

The NHL is returning to Europe for its first games outside of North America since 2019. After the two games in Prague, the Avalanche and Columbus Blue Jackets will play twice in Tampere, Finland, on Nov. 4-5. The Finnish government’s position on Russian players was not immediately clear.

Czech NHL great Dominik Hasek has led the opposition to Russian players coming to Prague since the games were announced in April. Hasek approached the the upper house of Parliament, the Senate, the government and the Foreign Ministry about the issue.

“It’s very important for the support of our Ukrainian ally and safety of our citizens,” Hasek said in an interview for a Russian broadcaster. After it was not aired in Russia, he published it in Czech media.

“Yes, we don’t want any promotion of the Russian aggression here,” Hasek posted on Twitter after the ministry’s move. “We’re guarding our lives and the lives of our allies in the first place.”

In Washington, Washington Capitals star Alex Ovechkin, who is Russian, was asked Thursday about the latest developments in the war, including protests in his home country.

Ovechkin, who has previously supported Russian President Vladimir Putin but also expressed his general desire for peace after the war began, said he would need to get more information, adding, “We’ll see what’s going to happen.” 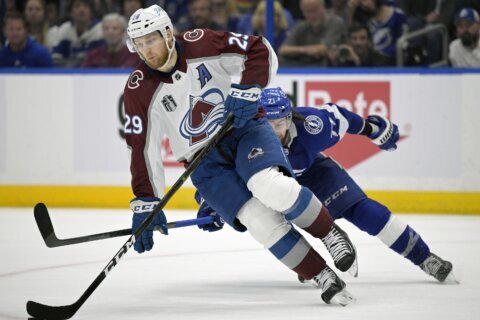