Ondrej Palat scored on a deflection with 1:50 remaining to break a tie and lead the Tampa Bay Lightning to a 3-1 victory over the New York Rangers on Thursday night for a 3-2 lead in the Eastern Conference final.
Listen now to WTOP News WTOP.com | Alexa | Google Home | WTOP App | 103.5 FM
(1/12) 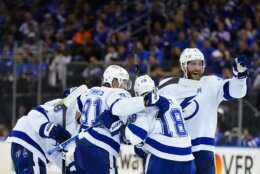 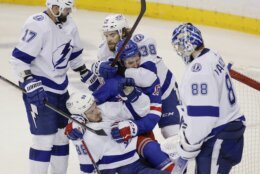 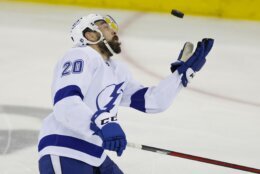 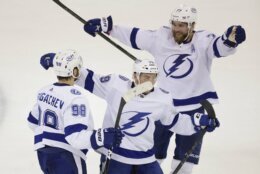 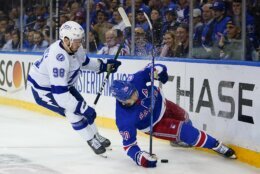 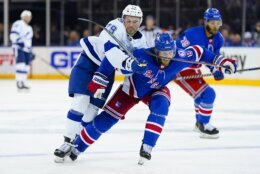 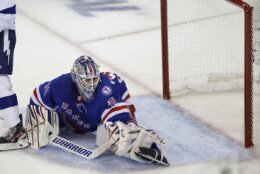 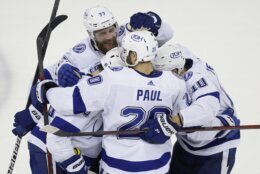 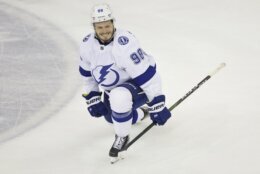 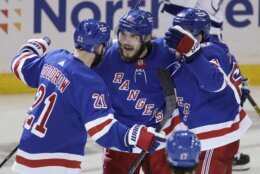 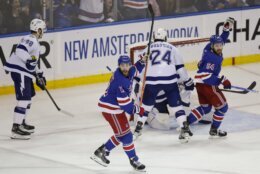 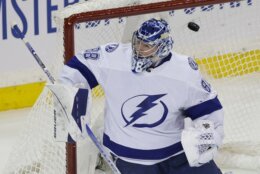 NEW YORK (AP) — After falling behind midway through the game, the Tampa Bay Lightning showed the poise of a two-time defending champion. They rallied for another late victory to move a win away from returning to the Stanley Cup Final.

Ondrej Palat scored on a deflection with 1:50 remaining to break a tie and lead the Lightning to a 3-1 victory over the New York Rangers on Thursday night for a 3-2 lead in the Eastern Conference final.

Mikhail Sergachev had a goal and an assist, and Brandon Hagel also scored to help the Lightning get their third straight victory, the first by a road team in this series. Andre Vasilevskiy stopped 24 shots.

On the tiebreaking goal, Sergachev got a pass from Victor Hedman and fired a shot from the right point through traffic in front that deflected off Palat’s knee and past Igor Shesterkin to give the Lightning their first lead of the night.

“I saw our guys going to the net hard,” Sergachev said. “I tried to shoot the puck as quickly as possible.”

“It definitely stings,” Rangers defenseman Jacob Trouba said. “It was a tight game that could have gone either way. I think that’s what makes it more frustrating.”

“We haven’t won the series, it’s just 3-2,” Lightning coach Jon Cooper said. “The Rangers — any team — has proven they can wipe that out. We’re the first ones with our eyes wide open. knowing that can happen. We’ll see how this goes.”

Vasilevskiy made several sprawling saves midway through the third, stopping attempts by Ryan Strome, Adam Fox and then Lindgren in a 32-second span to keep it tied at 1. Vasilevskiy also gloved a shot by Kevin Rooney with about eight minutes left.

After Palat’s deflection put the Lightning ahead, Hagel sealed the win with a empty-netter with 59 seconds remaining.

“The game-winning goal can come in the first minute or last minute,” Cooper said. “It doesn’t really matter when it comes. You just have to get it.”

The loss dropped the Rangers to a 3-2 series hole for the third time this postseason. They were down 3-1 to Pittsburgh in the first round before winning three straight to advance. Then, they trailed 3-2 against Carolina before winning the last two games to reach the conference finals.

Shesterkin made a nice save on a rush by Palat two minutes into the second period, and Vasilevskiy had sliding pad save on Tyler Motte less than a minute later to keep the game scoreless.

Shesterkin then made several nice saves during a Lightning power play, including on a slap shot by Nikita Kucherov 4:14 into the period.

The Rangers got their first power play of the night when the Lightning were called for too many men with about eight minutes into the middle period. They managed two shots during the advantage.

Shortly after the penalty expired, the Rangers opened the scoring when Lindgren fired a shot from the left side over Vasilevskiy’s right shoulder with traffic in front with 9:31 left in the period. It was the defenseman’s second of the postseason.

After a Lightning turnover, Motte fired a long shot that was gloved and smothered by Vasilevskiy with just under three minutes left to keep it a one-goal game.

Just 30 later, Sergachev tied it from center point with a shot through traffic for his first this postseason with 2:26 to go.

The Rangers outshot the Lightning in a fast-paced and penalty-free first period. New York had the only shot on goal of first 5 1/2 minutes, a slap shot by Braden Schneider 1:42 into the game. Kucherov hit a goalpost less than 20 seconds earlier.

Nicholas Paul hit a post with 8 1/2 minutes left in the period and Shesterkin stopped a shot by Riley Nash with 6:48 remaining on the Lightning’s second shot on goal of the game.

The Rangers had forwards Strome and Chytil in the starting lineup. Strome missed Game 4 with a lower body injury sustained in the previous game. Chytil left Tuesday night’s game just past the midpoint of the second period after a hit by Hedman.

New York was without forward Ryan Reaves, who was a healthy scratch. Kevin Rooney, who went in for Strome in the previous game, played again.

The Lightning were without forward Brayden Point (lower-body injury) for a ninth straight game. He has not played since he was injured in Game 7 of the first round against Toronto.