Steven Stamkos, Pat Maroon and Ondrej Palat each had a goal and an assist, and the Tampa Bay Lightning scored four times in the second period and beat the Colorado Avalanche 6-2 Monday night in Game 3 of the Stanley Cup Final.
Listen now to WTOP News WTOP.com | Alexa | Google Home | WTOP App | 103.5 FM
(1/8) 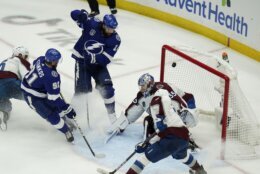 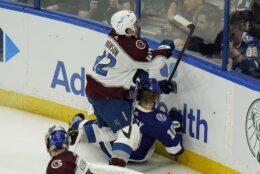 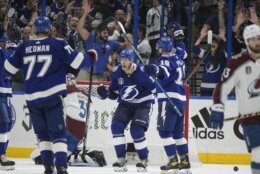 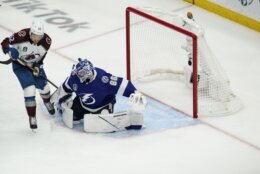 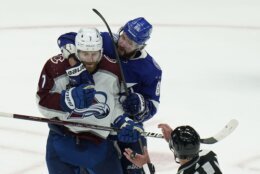 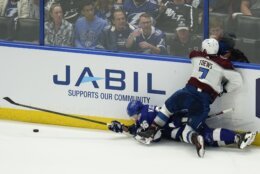 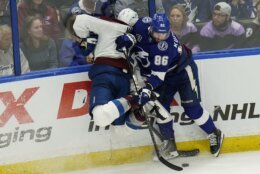 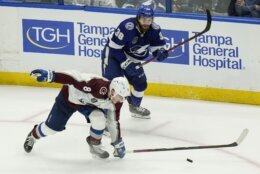 TAMPA, Fla. (AP) — The Tampa Bay Lightning’s bid for a three-peat is alive and well.

The victory two nights after suffering the most lopsisded loss in the team’s playoff history trimmed Tampa Bay’s series deficit to 2-1 and breathed hope in the team’s quest to become the first franchise in nearly 40 years to win three consecutive NHL titles.

“The guys you need to lead you have been doing that, and then everybody falls in line,” Cooper added. “You watch Stammer’s growth and Hedman’s growth through the years, and it’s probably not a coincidence that winning has followed us.”

Stamkos, Pat Maroon and Ondrej Palat each had a goal and an assist, and the Lightning scored four times in the second period to bounce back from an embarrassing 7-0 loss in Game 2 of the best-of-seven matchup.

“A big part, too, is our goaltender,” Cooper added. “For him to go through what he went through two nights ago and then perform like he did tonight … not only that, but to have them score first and then have the team to respond and back him up, I guess that’s how you get to the places that we’ve been.”

Stamkos, Paul, Maroon and Perry scored in the second period, when the Lightning chased Colorado goalie Darcy Kuemper while pulling away.

Gabriel Landeskog had two goals and Mikko Rantanen and Cale Maker each had two assists for the Avalanche. Kuemper gave up five goals on 22 shots before he was replaced by Pavel Francouz, who finished with nine saves.

Game 4 is Wednesday night at Amalie Arena, where the Lightning have won a franchise-record eight straight playoff games and Colorado lost on the road for the first time this postseason.

“Right now I feel like we’re still in the driver’s seat up 2-1,” Avalanche star Nathan MacKinnon said. “We’ve got to really show up for Game 4, regroup, be better and stay even-keeled.”

Two nights after being limited to just 16 shots in the seven-goal loss in Denver, the Lightning found a way to neutralize Colorado’s speed and solve Kuemper to avoid falling to the brink of elimination.

The defending champs became the first team since 1919 to win a Stanley Cup Final game after losing by seven-plus goals the previous game.

“We knew they were too proud to go away,” MacKinnon said. “It’s the Stanley Cup Final, we’re not expecting to sweep. They obviously didn’t hang their head on losing to us in Game 2, and we’re not going to tonight.”

The Avalanche lifted Kuemper after Maroon scored a soft goal that put the Lightning up 5-2 with 8:45 remaining in the second. Perry reached behind Francouz to tap in a rebound that came off the right post to make 6-2 with 5:02 left in the period.

The back-to-back champions overcame a 2-0 series deficit in the Eastern Conference final to eliminate the New York Rangers in six games. They’re looking to do it again against Colorado to complete their quest for the NHL’s first three-peat in nearly 40 years.

Cirelli and Palat scored in the opening period for the Lightning, who played with a lot more energy than in Games 1 and 2, when they appeared to be a step or two slower the speedy, high-scoring Avalanche.

The seven-goal loss in Game 2 raised the question of whether a team that’s played 68 postseason games — most by a single club over a span of three playoffs — since 2020 is running out of gas as it tries to become the first franchise to win at least three consecutive Stanley Cup titles since the New York Islanders won four in a row from 1980-83.

And while, Cooper discounts the toll playing so much playoff hockey has taken on his players, Colorado clearly looked like the fresher team in Games 1 and 2 after going 12-2 against Nashville, St. Louis and Edmonton in breezing through the first three rounds.

Spurred on by a sellout crowd of more than 19,000, and playing with a sense of urgency absent for much of the first two games, the Lightning scored twice in a span of 1:51 to wipe out a 1-0 lead the Avalanche took on the first of Landeskog’s two power-play goals.

Cirelli crossed in front of Kuemper to make it 1-1 at 13:03 of the opening period. Palat delivered his 10th goal of the playoffs off a pass from Stamkos to give Tampa Bay a lead for the first time in the series.

Avalanche coach Jared Bednar said Kuemper didn’t have a good night, but noted: “Neither did our team.”

“I felt like the goals we gave up, we didn’t make them earn them,” the coach added.

Vasilevskiy yielded a second power-play goal to Landeskog, who briefly trimmed a two-goal deficit to 3-2 before Tampa Bay pulled away for good.

The Lightning became the third team in NHL history score six goals in a Stanley Cup Final after yielding at least seven the previous game.