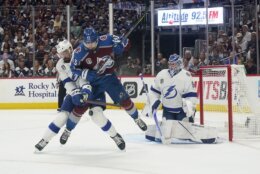 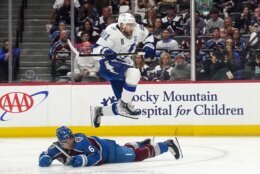 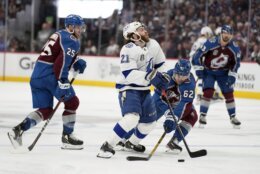 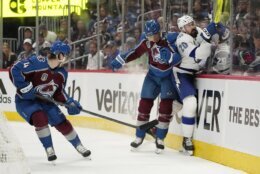 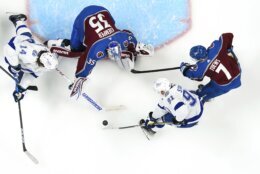 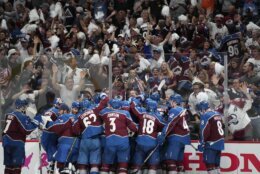 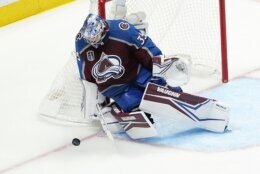 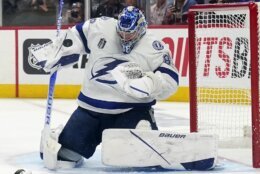 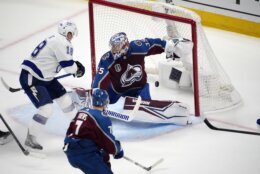 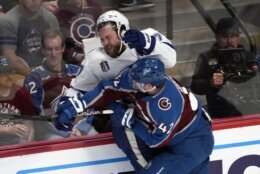 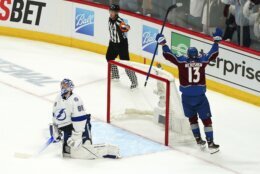 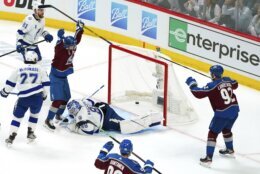 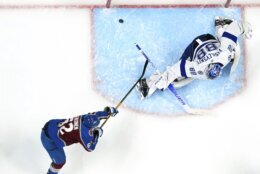 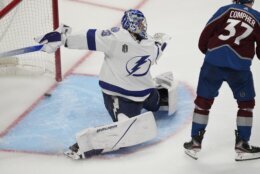 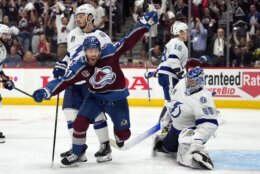 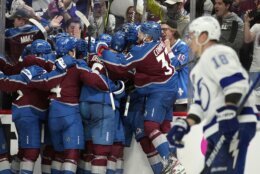 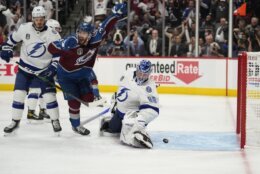 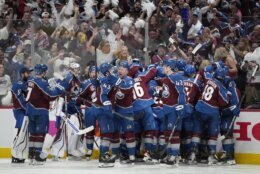 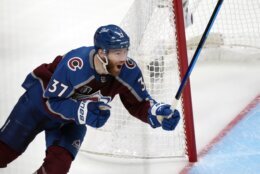 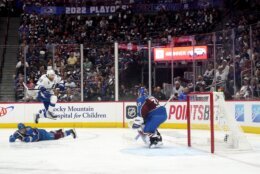 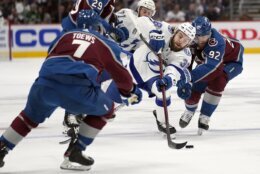 When the puck dropped, the Avalanche showed they could use their speed to offset Tampa Bay’s players who have been here, done that. And it doesn’t hurt to have a guy who also hoisted the Cup.

Andre Burakovsky scored 1:23 into overtime to give Colorado a 4-3 victory in Game 1 on Wednesday night and put the Avs up in a series that’s shaping up to be a classic. Burakovsky is one of only two Colorado players with Stanley Cup rings, and that came in handy.

The pace? Furious. The stakes? Either Tampa Bay finishing off the first NHL three-peat in almost four decades or this Colorado core’s first championship after years of playoff disappointments.

The Avalanche with a fast start how they can use their speed to knock even the most seasoned opponents back on their heels. Backstopped by Darcy Kuemper, the no-doubt after all choice to start in goal now that he’s healthy, the penalty kill was aggressive in going a perfect 3 for 3 against the Lightning’s potent power play.

“We had a great forecheck and we were pretty good on clearing pucks when we had the chance,” forward Artturi Lehkonen said.

An early penalty kill built momentum for Colorado, which opened the scoring on captain Gabriel Landeskog’s goal 40 seconds after Josh Manson’s penalty expired. Manson — one of general manager Joe Sakic’s expensive trade deadline pickups — more than made up for a holding the stick minor with several big hits.

Lehkone, the Avalanche’s other deadline acquisition, also kept up his knack for scoring key goals. He had their third goal of the first period after Valeri Nichuskin scored the second as part of a dominant performance all over the ice.

“Huge X-factor,” coach Jared Bednar said. “He’s been doing that type of thing for us for a couple years now.”

Tampa Bay’s latest additions also played a major role, with Nick Paul outracing Colorado defenseman Jack Johnson to a loose puck for a goal in the first that limited the damage and kept the defending champs in the game. Brandon Hagel, who has been banged up and was a question mark to play, got beaten to a loose puck by Landeskog, an uncharacteristic goal for reigning playoff MVP Andrei Vasilevskiy to give up by letting the initial shot sneak through under his left arm.

Of course, the Lightning counterpunched.

In another example of what has made the Lightning the NHL’s best team over the past three years, they turned the tide in the second period with goals by Ondrej Palat and Mikhail Sergachev 48 seconds apart.

“We’re playing a really good team and they’re not going to roll over and lay back,” Bednar said. “They’re going to have push back.”

So did his Avalanche, clamping down with another big kill in the third period to finish what Landeskog called a “resilient win.”

Colorado outshot Tampa Bay 38-23, and there was no argument from the losing side about the result of the series opener between two evenly matched opponents.

“There’s some positive signs for us in this game,” Lightning coach Jon Cooper said. “But the right team won the game, so give them credit for pulling it out.”

The arena was rocking from the start of warmups for the first Stanley Cup Final game in the city in 2001 — also the last year the Avalanche won the Stanley Cup, with Sakic serving as captain. Fans chanted, “We want the Cup!” throughout the leadup and at times during the game, which was a showcase of the high-scoring hockey that has been the standard all season.

Tampa Bay’s most prolific goal-scorer from each of the past two title runs was back, with center Brayden Point returning to play his first game since injuring his right leg a month ago.

Colorado has a series lead despite playing without forwards Nazem Kadri (right thumb) and Andrew Cogliano (right hand), who were injured last series in a sweep of Edmonton in the Western Conference final.

The Avalanche swept Nashville in the first round, as well, and dispatched rival St. Louis in six before taking out Connor McDavid and the Oilers. If anything, Game 1 against the Lightning showed this series won’t be easy for either team.

“I don’t think by a country mile we gave them our best game,” Cooper said. “To beat a team like that, we need to have better in us.”