Bednar got his wish on Friday night.

Helm scored with 5.6 seconds left and Darcy Kuemper stopped 18 shots as the Avalanche finished off their second-round series with a 3-2 win over the St. Louis Blues in Game 6 on Friday night.

“We wanted him to be assertive and not so safe,” Bednar said.

J.T. Compher scored twice for Colorado, which advanced to the Western Conference finals for first time since 2002. The Avalanche had been eliminated in the second round each of the past three years.

Colorado opens the series against Edmonton on Tuesday night in Denver.

On the winning goal, the 35-year-old Helm blasted a shot from the faceoff circle that went over the glove of Husso.

“We had three guys going hard to the net,” Helm said. “I was just kind of trailing. The pass bounced off the side wall. I just wanted to get the puck on the net and it found its way.”

It was the second series-clinching goal for Helm. As a member of the Detroit Red Wings, he nailed down the Western Conference championship with an overtime goal in Game 5 against Chicago, exactly 13 years ago.

“There’s no other guy that deserves it as much as he does,” Colorado forward Gabriel Landeskog said. “You talk about his work ethic, but he’s the guy that comes to the rink with a smile on his face, gets along with everybody.”

Kuemper, who missed part of the first round series against Nashville with an eye injury, improved to 6-2. He also enjoyed watching Helm record the biggest tally of the series.

“A super-clutch goal,” Kuemper said. “It’s always fun to see someone like Darren, who plays the game so hard, (but) always doesn’t get rewarded with the points, to come up with a big goal like that is really special.”

Compher, who had been held scoreless over the Avalanche’s first nine games of the playoffs, broke free at the perfect time. He pounced on the rebound of a shot from Josh Manson to tie the score 1-1 early in the second period. Compher then tied it 2-2 on a wrist shot from the faceoff dot with 9:41 left in the third.

Husso, who have up 13 goals on 93 shots over the previous three games, rebounded with a much stronger effort.

Colorado dominated play for long stretches, but could not solve Husso, who regained his job after Jordan Binnington went down with a lower body injury in Game 3. Husso robbed Nazem Kadri from close range early in the third period.

Husso had a 37-save shutout in a Game 1 win over Minnesota in the first round.

Faulk scored late in the first period on a wrist shot from between the circles. He sailed into the slot before taking a pass from Robert Thomas. The drive grazed off the arm of Kuemper. It was Faulk’s first goal of the postseason after handing out seven assists.

Kyrou also missed the net on a breakaway in the second period and had shot from close range stopped by Manson in the defensive play of the game after Kuemper was out of position.

Kyrou then converted on a 2-on-1 off a pass from Brayden Schenn to put the Blues up 2-1 at 9:34 of the second period.

“We feel like we’re a good team and we let that series slip,” Schenn said.

The Blues forced a Game 5 by beating Colorado 5-4 in overtime on Wednesday on a goal by Tyler Bozak.

The Avalanche bounced back from that setback with an impressive effort.

“From the drop of the puck, we were ready to go,” Bednar said. “You could tell the belief was there.”

Wayne Gretzky attended the contest. Gretzky, who played 18 games for the Blues in the 1995-96 season, has a house in St. Louis. He drew a huge ovation from the crowd. 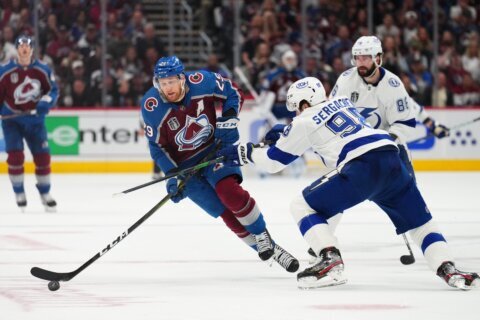