The Avalanche have advanced to the Stanley Cup semifinal for the first time since the 2001-02 season. Colorado beat the St. Louis Blues 3-2 on Friday to win the best-of-seven series 4-2.

“We’ve been through some dark times together,” said Landeskog, who was drafted by Colorado in 2011. “Obviously, our team has changed a lot over the last few years and we’ve gotten better as a team. It’s rewarding to get over this hump but at the same time we’ve got a big goal in mind. I feel like the best is ahead.”

After three consecutive seasons in which the Avalanche lost in the second round, Colorado moves on to the third round in the postseason.

“I’m extremely proud of our guys,” Colorado coach Jared Bednar said. “This is an emotional time. I honestly don’t think about this for my career. I know how much the players wanted it. I’ve been with a lot of these guys for six years and some of them were here before me. I’ve had discussions with them. It’s hard to win. I hope the guys take a breath and get even better moving forward.”

The Avalanche, the No. 1 seed in the Central Division, will start at home against the No. 2 seed in the Pacific Division, the Edmonton Oilers. Game 1 will be played Tuesday.

Edmonton was 1-0-2 against Colorado during the regular season.

“We’re excited for the next challenge. The job is half done,” said J.T. Compher. “There’s plenty more for us to accomplish. There is more to go. It’s a crazy game, hockey. Everyone is chipping in.”

Colorado lost to the Detroit Red Wings in seven games in the 2002 Western Conference Finals, after winning the Stanley Cup the previous season. Colorado general manager Joe Sakic was the captain of that Stanley Cup-winning team alongside hall of fame teammates Rob Blake, Peter Forsberg and Patrick Roy.

It took a former Red Wing to help push Colorado into the semifinal. Darren Helm scored the game-winning goal with 5 seconds remaining against the Blues.

On the winning goal, the 35-year-old Helm blasted a shot from the faceoff circle that went over the glove of St. Louis goalie Ville Husso.

“When I signed, a few friends I’d made in Detroit gave me a little bit of crap,” Helm said. “They’re happy to see me here and seeing the team successful. We know what we got in this dressing room. If we stick to our game plan, good things will happen.”

The Oilers knocked out the Calgary Flames with a 5-4 overtime win in Game 5 on Thursday to win that series.

Edmonton has not been to the third round of the postseason since 2006, when the Oilers lost to the Carolina Hurricanes in seven games in the Stanley Cup Final.

Edmonton has played Colorado twice before in the playoffs, a five-game loss in the 1997 Western Conference semifinals and a seven-game victory in the 1998 conference quarterfinals.

“Edmonton poses a lot of challenges. They have two (Connor McDavid and Leon Draisaitl) of the most dangerous players in the league right now and maybe three with (Evander) Kane,” Nate MacKinnon said. “They’re structure is underrated. So it’s a tough team to play against. They don’t give you much. They’re committed to both sides of the puck. It will take a full team effort to shut those guys down. We’re confident. We feel like if we play our best we can get it done against anybody. It’ll be a tough series.”

Josh Manson will have a personal connection in the series. His father, Dave, is an assistant coach with the Oilers. The elder Manson, 55, played 1,103 career NHL regular season games and 112 career playoff games, including three seasons as a defenseman with the Oilers from 1991-94. He was selected 11th overall by the Chicago Blackhawks in the 1985 NHL Draft.

“They’ve been playing some good hockey lately and I think they’re a bit of a different team with my dad going there,” Manson said. “I’d like to think the coaching staff has done a good job so far. It’s going to be a tough series. They’re playing fast. They have some big bodies and some pretty good skill up front. It’ll be a new challenge for us.”

Manson said his dad has been in touch with him.

“I congratulated him and he reached out and said go win this game so I can come and see my granddaughter,” Manson said. “That’s No. 1 on his list. He wants to come to Denver to see my daughter, his granddaughter. We really haven’t talked too much hockey. It’s just family stuff. That’s how it’s been my entire life growing up.”

“We’re only halfway to go our goal. That’s how I look at it,” he said. “I’m happy and proud of our guys. We’re just starting.” 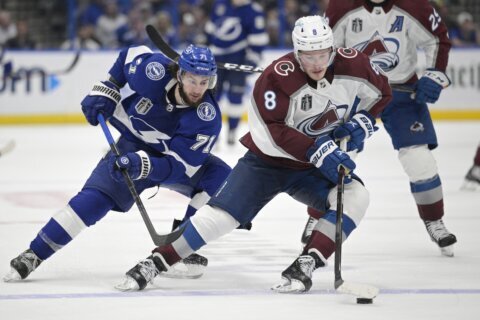 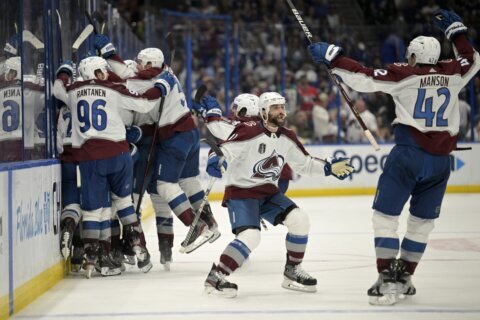 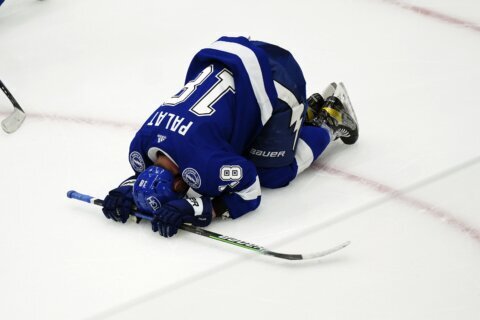