DENVER (AP) — Tyler Bozak and the St. Louis Blues experienced just about every emotion imaginable over the course of a win-or-season-ends game in which they fell behind by three goals.

Ultimately, they landed on this improbable one — elation.

Bozak scored 3:38 into overtime and the Blues fended off elimination in Game 5 of the Western Conference semifinals, overcoming a pair of deficits in a 5-4 victory over the Colorado Avalanche on Wednesday night.

Bozak, a fourth-line center, unleashed a shot from near the blueline that got past Darcy Kuemper, capping a remarkable comeback for St. Louis.

“It was an amazing hockey game,” Bozak said. “I’m sure everyone that was watching thought the same thing.”

Robert Thomas had two goals, including the tying tally with 56 seconds left in regulation, for a resilient Blues team. It’s the latest game-tying goal for the Blues when facing elimination, according to NHL Stats. Vladimir Tarasenko and Justin Faulk also scored, Nick Leddy had four assists and Pavel Buchnevich had two.

“You’ve got nothing to lose, you might as well throw it all out there,” Thomas said. “That was our mentality.”

The comeback offset a hat trick from Nathan MacKinnon, who looked like he might have just turned in a signature moment with goal No. 3. He went end-to-end, working his way around Blues defenseman Leddy with nifty stick work and lifting a shot over goaltender Ville Husso for a 4-3 lead. It was his second career postseason hat trick.

“Doesn’t matter,” MacKinnon said of his feat. “Looking to get a win.”

Thomas tied it up with Husso on the bench for an extra skater, setting the stage for Bozak, who played college hockey down the road at the University of Denver.

To think, he didn’t play much down the stretch of the third period, with the Blues rolling out just three lines. When he got his chance in OT, he made the most of it.

“There’s definitely no such thing as a bad shot,” Bozak said. “So just tried to get it through the traffic and it went in. So that’s awesome.”

Game 6 is Friday in St. Louis.

The Blues have rallied from a 3-1 deficit to take a playoff series twice in their history — 1999 against Phoenix and 1991 versus Detroit.

They’re looking to write another chapter.

“This team’s come from behind quite a bit this year in games so they don’t give up,” Blues coach Craig Berube said.

Captain Gabriel Landeskog also scored and Bowen Byram had two assists for the Avalanche, who were on the verge of advancing to the Western Conference final for the first time since 2002.

Instead, they have to wait — and wonder. The second-round has proven to be a big hurdle for the Avalanche. They’ve been eliminated at this stage in each of the last three postseasons.

“You sulk for three minutes and you move on. Simple as that,” Landeskog said. “It’s playoff hockey. It’s not supposed to be easy.”

Husso made 30 saves for St. Louis. He took over in Game 3 when Jordan Binnington was injured following a collision between Nazem Kadri and Blues defenseman Calle Rosen that caused Kadri to crash into Binnington.

Afterward, Kadri received racist death threats on social media, which led to increased security to protect him. He responded in Game 4 with a hat trick. On Wednesday, fans along the boards held up signs that read “Stand with Naz.”

MacKinnon came out flying in the first period, taking five shots and scoring twice to give the Colorado an early 2-0 lead. Those were the first two goals of the series for MacKinnon, who has seven in the postseason.

The speedy MacKinnon also had an assist to give him 82 career playoff points. He became the fourth player in franchise history with 80 or more postseason points, joining the company of Sakic (188), Peter Forsberg (159) and Peter Stastny (81).

After Landeskog made it 3-0 just over 4 minutes into the second period, Tarasenko knocked in his first goal of the series 10 1/2 minutes later to jumpstart the Blues.

“We got on our heels a little bit,” said MacKinnon, whose team is 4-0 on the road in these playoffs. “We wanted it so bad, I guess. … Win the third, go to the conference finals, whatever. It’s one period. Got to keep our game going, stay aggressive. That’s what we’ll do.”

Berube opened his pregame talk with reporters Wednesday by condemning the racist threats made toward Kadri.

“In no way is it acceptable by the St. Louis Blues or anybody else, for him to go through that,” Berube said. “Being a Native American myself, I’ve heard it all. I’ve been around it. It’s not a good thing.” 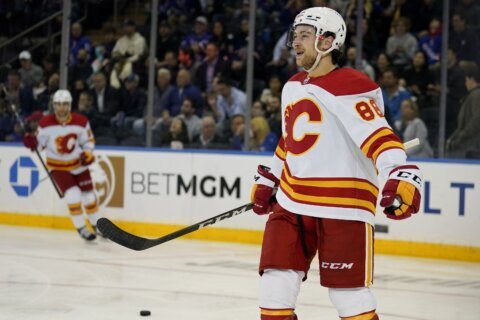