Nathan MacKinnon saw a team that just couldn’t get up the ice with its customary speed. Couldn’t generate quality scoring chances. Couldn’t get in a flow.

“We were bad,” the Colorado forward acknowledged after a 4-1 loss to St. Louis that tied the second-round series at a game apiece. “Really bad.”

The Blues made all the right moves — from shuffling their lines to generate more offense to finding a way to clog up the middle and frustrate the Avalanche’s fast flyers.

It’s now Colorado’s move in this high stakes game of chess on ice, with the series shifting to St. Louis for Game 3 on Saturday (8 p.m. ET, TNT).

Everything’s on the table, too, for the top seed in the West. That includes line changes and possibly swapping out players.

“You’re not going to win in the playoffs if you don’t bring your best game,” Avalanche coach Jared Bednar said Friday after practice. “We weren’t even close last night and it’s on us. …. Our best game is to be determined. We’re always in search of the perfect game.”

First order of business: Finding a way to create more space for MacKinnon and defenseman Cale Makar to maneuver. The Blues made it awfully difficult for them through the neutral zone in Game 2. Makar has yet to register a point after a three-goal, seven-assist series in a first-round sweep of Nashville.

There’s also the curious case of Mikko Rantanen, who led the team in points during the regular season but has yet to score in these playoffs (he does have seven assists).

“Do you think Mikko is playing his best hockey that you’ve seen him play?” Bednar quizzed. “We need him to be an impact player.”

The Avalanche potentially could shake things up, possibly insert players like forwards Alex Newhook and Logan O’Connor into the lineup.

Or they may just shuffle their lines similar to the way the Blues did before Game 2. St. Louis got instant results by pairing David Perron (two goals) with Pavel Buchnevich (two assists) and Ryan O’Reilly (one assist).

Colorado may reunite the top line of MacKinnon, Rantanen and captain Gabriel Landeskog. But Bednar added he was pleased of the performance of Landeskog, Nazem Kadri and Artturi Lehkonen on a line. As for the mood of the squad, Bednar said the “guys are in good spirits.”

“They understand it’s about us mostly — mostly about us,” he added.

Still, there’s this always hovering over the Avs: They have lost in the second round in each of the last three postseasons. Last season, they were up 2-0 on Vegas before losing four straight.

“There’s no reason to panic,” defenseman Bowen Byram said. “You’re not going to win every game in the playoffs. They’re a good team. They know how to win. They’ve won before. … It’s just readjusting.”

Blues goaltender Jordan Binnington has befuddled Colorado. After stopping 51 shots in a 3-2 overtime loss in Game 1, Binnington turned back 30 on Thursday. Since 2019, when he led the Blues to the Stanley Cup title as a rookie, he’s recorded a 2.74 goals-against average.

“He made saves when he needed to — big time,” Blues coach Craig Berube said.

Colorado’s mission is to take make sure he doesn’t track the puck as well as he has been through the opening two games.

“Goalies are so good now that if they’re going to see everything, they’re going to stop it,” Bednar said. “Breaking the goalie’s eyesight, even if it’s a moving screen, it’s uber important. … We’ve got to get into his eyes.”

Really, though, it had a lot to do with St. Louis not allowing Colorado to zip around the ice. The Blues did what most haven’t been able to do — slow them down.

They certainly wouldn’t mind a repeat performance at home.

“It’s playoff hockey. It’s going to come down to competing at a high level, winning battles, making sure you’re playing with good structure and every guy that’s dressed needs to be at his best,” Berube said. “That’s what we got (in Game 2). Every guy was at his best, in my opinion.”

For Colorado, a road win begins with quieting the crowd early. They won both games in Nashville by scoring first.

“We get to go on the road and hopefully steal one there, hopefully two,” MacKinnon said. “We’ve got to forget about (Game 2) and move on and get back to the way we can play.” 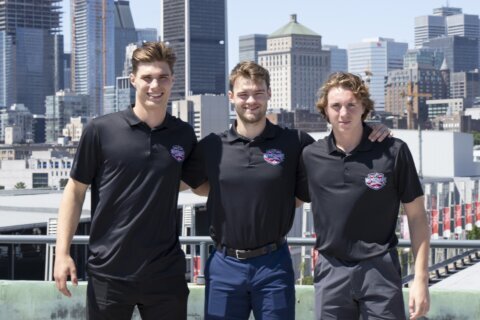