WINNIPEG, Manitoba (AP) — Adam Lowry, Blake Wheeler and Kyle Connor all scored in a span of 3:21 in the third period to help the Winnipeg Jets beat Colorado 4-1 on Sunday night, handing the Avalanche their season-high fourth straight loss.

Connor Hellebuyck made 30 saves to make it into the franchise’s record book.

“We were solid in our details, we just grinded it out until the opportunity was there,” Hellebuyck said. “That’s the firing power we have in this locker room. We can score at any moment.”

Hellebuyck played his 65th game of the season and 380th with the team. That set a franchise record (Atlanta/Winnipeg) for games played by a goaltender, one more than Ondrej Pavelec.

When Hellebuyck’s achievement was announced to the crowd of 14,443 at Canada Life Centre, fans gave him a standing ovation.

“It just shows that the fans appreciate everything I’ve accomplished here with them,” said Hellebuyck, who also recorded his 200 career win. “I’m glad to call Winnipeg my home this past few years and look forward to some more.”

J.T. Compher scored early in the third period for the Avalanche, who have lost all four of those games in regulation. Darcy Kuemper stopped 40 shots for the Central Division champions and top seed in the Western Conference.

“I think our work is cut out for us here to get our guys back to playing our game, getting back to our identity,” Colorado coach Jared Bednar said. “It starts with the work, the competitiveness. Moves on to execution, details — the whole gamut now. We’ve seen it all over the last four games.”

Both clubs had chances on the power play in the first and second periods, but couldn’t get it down.

The Avalanche finally hit the back of the net at 5:03 of the third when Erik Johnson sent a quick pass to an open Compher, who beat Hellebuyck on the glove side.

“We know this last week has not been good enough and we’re trying to make sure when playoffs come around we’re doing things the right way,” Compher said. “But there’s no excuses in our room. It just hasn’t been good enough.”

Winnipeg responded to Compher’s 17 goal of the season with the trio of goals.

Winnipeg soon responded with the trio of goals. A Josh Morrissey shot went off Lowry at 9:03, Wheeler got his stick on a bouncing puck and beat Kuemper at 10:23 and Connor notched his 45th goal of the season at 12:25 to make it 3-1.

Connor’s goal total surpassed former Jets sniper Patrik Laine for most goals in a single season since the team returned to Winnipeg in 2011.

“It’s a pretty cool achievement, I guess,” Connor said. “There’s a lot of good players that have come through this organization, a lot of talent, a lot of skill. It’s even better to get a win here tonight, too.”

Ehlers finished off the scoring with about four minutes left.

Jets: Host the Flyers on Wednesday as part of their season-ending four-game homestand. 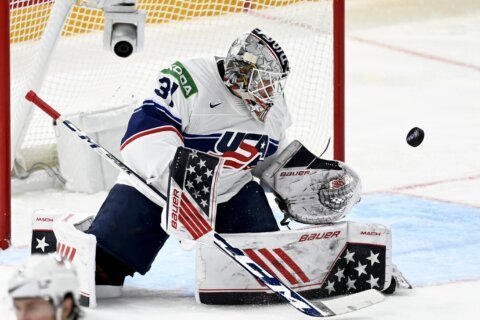